Frankie Valli is an American singer who rose to fame as the lead singer of the band The Four Seasons in the 1960s. The band, which produced popular hits like ‘Sherry’, ‘Working My Way Back to You’, and ’Who Loves You’ launched Valli as a much loved singer enabling him to embark on a highly successful career as a solo artist later on. Known for his unusually powerful falsetto voice, Valli has scored 29 Top 40 hits with The Four Seasons and nine Top 40 hits as a solo artist. Born into a middle-class family, he developed an early interest in music. His mother sensed her young son’s talents and encouraged him in his endeavors. He was greatly inspired to take up music as a career after watching Frank Sinatra in live performance. He listened to his favorite singers on record and practiced singing by himself in order to develop his voice. He began his musical career by working with a variety of acts and found moderate success. By the 1960s he had become part of the band that would be known as The Four Seasons. He achieved phenomenal success as the band’s lead singer and also enjoyed a very successful stint as a solo artist
Continue Reading Below American People
American Men
Male Singers
Taurus Singers
American Singers
Childhood & Early Life
Frankie Valli was born as Francesco Stephen Castelluccio on May 3, 1934 to an Italian family in New Jersey. His father, Anthony Castelluccio, was a barber and his mother, Mary Rinaldi, was a homemaker who also worked in a beer company. Frankie was the youngest of three siblings.
He loved singing from a young age and his mother encouraged his musical aspirations. She once took him to see Frank Sinatra in live performance following which little Frankie decided to take up singing as a career.
He was mentored by the singer "Texas" Jean Valli when he was a young boy. As a tribute to his mentor, he adopted the last name “Valli” when he embarked on a singing career. 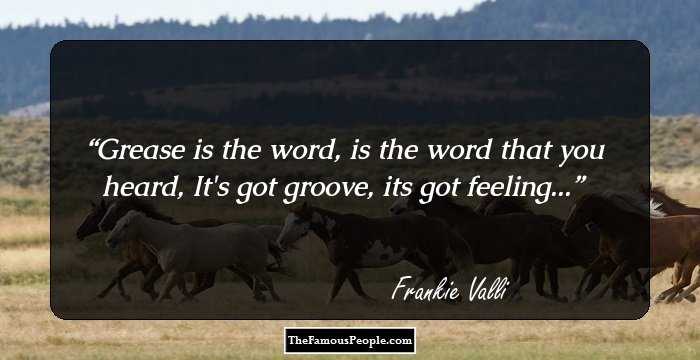 The Hottest Male Celebrities With The Best Abs
Career
During the initial days of his career he performed with a number of variety acts. In 1951 he started performing with the Variety Trio consisting of Nickie DeVito, Tommy DeVito and Nick Macioci. The trio had heard Valli sing and offered him a guest spot when the group performed. The Variety Trio disbanded in late 1952, but Valli kept in touch with Tommy DeVito and Nick Macioci (later renamed Nick Massi) with whom he continued performing over the years.
In 1960, the band The Four Seasons came into being with Frankie Valli as the lead singer, Tommy DeVito on lead guitar and baritone vocals, Nick Massi on electric bass and bass vocals, and Bob Gaudio on keyboards and tenor vocals.
The group released their first album ‘Sherry & 11 Others’ in 1962. The album featured the single ‘Sherry’ which was their first No. 1 song, and other hit songs like ‘Big Girls Don't Cry’, ‘Walk Like a Man’, ‘Candy Girl’, and ‘Ain't That a Shame’. The album proved to be a great success and launched the careers of the band members.
In 1962, they were invited to perform their hit ‘Big Girls Don't Cry’ on the show ‘American Bandstand’. The same year, they released the Christmas album, ‘The 4 Seasons Greetings’ which featured a unique version of ‘Santa Claus Is Coming to Town’ along with other Christmas themed songs.
From 1965 to 1967, The Four Seasons recorded songs using the nom de disque of The Wonder Who? The recordings under this name generally featured a softer version of falsetto singing by Valli.
During the 1960s The Four Seasons became one of the most famous pop acts in the country. Some of their super hits were ‘Let's Hang On!’, ‘Don't Think Twice, It's All Right’ (as The Wonder Who?), ‘Working My Way Back to You’, ’Opus 17 (Don't You Worry 'bout Me)’, and ‘I've Got You Under My Skin’.
The group’s popularity, however, started declining by late 1960s, and they were unable to reclaim the success of their initial days. By now Frankie Valli had also started singing as a solo artist. His 1974 solo single ‘My Eyes Adored You’ became a big hit and revived interest in the music of The Four Seasons.
The Four Seasons’ 1975 album ‘Who Loves You’ became very successful and the album’s title track peaked at No. 3 on the Billboard Hot 100 singles chart. Another one of the album’s singles, ‘December 1963 (Oh, What a Night)’, spent six months on the charts and became the group's all-time best-selling single.
The group recorded only sporadically in the 1980s and beyond though they remained popular as a touring band.
Frankie Valli appeared in the HBO series ‘The Sopranos’ as mobster Rusty Millio and also made a special guest appearance (as himself) during Season eight of ‘Full House’.
Major Works
His 1967 single ‘Can't Take My Eyes Off You’ is one of his most popular solo singles. It peaked at No. 2 on the Billboard Hot 100 and had a major cultural impact. The song was so popular that it spawned numerous cover versions in different countries all over the world. The single’s enduring popularity can be assessed by the fact that it has been featured on a number of television and film soundtracks.
The highly popular song ‘My Eyes Adored You’ (1974), another one of Valli’s solo singles, became his first No.1 hit as a solo artist. Even though it was his solo effort, the success of the song helped to revive interest in the music of The Four Seasons which had somewhat fallen out of favor in mid-1970s.
Awards & Achievements
He received the National Italian American Foundation (NIAF) Lifetime Achievement Award in 2006.
Frankie Valli was honored with the Ellis Island Medal of Honor for his commitment to many humanitarian causes in 2012.
Personal Life & Legacy
Frankie Valli’s first marriage was to Mary Mandel which produced two daughters and ended in divorce in 1971. His second marriage was to MaryAnn Hannagan in 1974 which too ended after eight years.
He married Randy Clohessy, a woman 26 years his junior, in 1984. The couple had three sons and separated in 2004.
You May Like

See the events in life of Frankie Valli in Chronological Order