Beyonce Giselle Knowles-Carter, a singer more popularly known just as Beyonce, is a R&B artist who rose to fame as the lead singer of the all-girls group Destiny’s Child which also had the likes of Kelly Rowland and Michelle Williams in the line-up. After a highly successful stint with the group which became one of the world’s best selling girl groups of all time, Beyonce embarked on a career as a solo artist. Her solo career began with a bang—her debut album won five Grammy Awards and sold over 11 million copies worldwide. Even as a child she had displayed a keen interest in music and dancing from an early age and regularly participated in local talent shows. She surprised her school authorities when she won a school talent show when she was just seven by beating the other contestants who were well into their teenage. She formed a girls’ group while she was still very young with some of her friends. Her father recognized the potential his daughter had and decided to become her manager. Her group, which later became famous as Destiny’s Child, went on to become a highly popular music group following which Beyonce ventured into an even more successful solo career as a singer and actress. Rumi Carter
4th September In History
DID WE MISS SOMEONE?
CLICK HERE AND TELL US
WE'LL MAKE SURE
THEY'RE HERE A.S.A.P
Quick Facts

American People
Rhythm & Blues Singers
American Women
Virgo Singers
Women Singers
Childhood & Early Life
She is the daughter of Mathew Knowles and Tina. His father was a sales manager while her mother worked as a hairdresser and salon owner.
She attended St. Mary’s Elementary School where she also learned to dance. She loved singing from a young age.
She enrolled in Parker Elementary School, a music magnet school in 1990 and also attended the High School for the Performing and Visual Arts before moving on to the Alief Elsik High School.
She auditioned for an all-girl entertainment group when she was eight. She was selected along with Kelly Rowland and LaTavia Roberson and put in a group called Girl’s Tyme with three other girls. The group performed in several talent shows and later bagged a contract with Columbia Records. 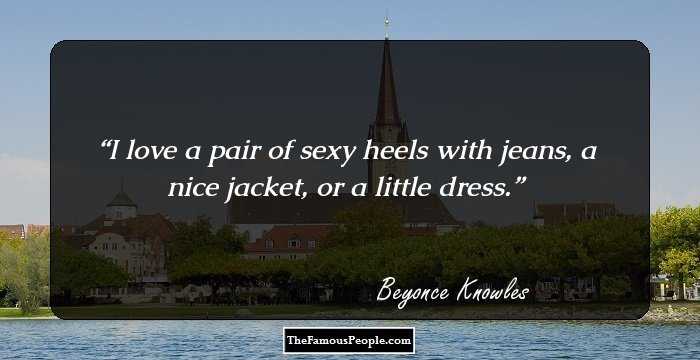 Quotes: Love
Continue Reading Below
Career
The girls changed the name of the group to Destiny’s Child in 1993 and released their self-titled debut album in 1997. The album had the song ‘No, No, No’ which became their first major hit.
Their second album, ‘The Writing’s on the Wall’ was out in 1999. It spawned the group’s first No.1 single, ‘Jumpin’ Jumpin’ and also the super hit songs ‘Bills Bills Bills’ and ‘Say My Name’. The album sold more than 8 million copies worldwide.
Their third album, ‘Survivor’ was even a bigger success than its predecessors. The album debuted at number one on the Billboard 200 and earned the group several Grammy Award nominations. The singles ‘Survivor’ and ‘Bootylicious’ became very popular.
Motivated by the success of her girls’ group, Beyonce embarked on a solo career with her debut solo album, ‘Dangerously in Love’ in 2003. The songs included uptempos and ballads inspired by R&B and soul genres with elements of hip hop and Arabic music. The album was a huge hit which established her as a solo star.
She released her next album, ‘B’Day’ on her 25th birthday, 4 September, 2006. The music style of the album is borrowed from a range of styles like funk, hip hop and R&B that were popular during the 1970s-80s. The album was reviewed very positively.
She featured in a combination of slow and midtempo pop and R&B ballads, and more upbeat electropop and Europop genres in her next album ‘I Am… Sasha Fierce’ in 2008. The album sold over eight million copies worldwide. She embarked on the ‘I Am… World Tour’ in March 2009 which consisted of 108 shows.
In bringing out her album ‘4’ in 2011, she also served as the executive producer and co-writer. She attempted to bring traditional R&B back to contemporary music. The album was very well received by music critics.
In addition to her music career she has also appeared in several movies like ‘Carmen: A Hip Hopera’ (2001), ‘The Pink Panther’ (2006), ‘Obsessed’ (2009), and ‘Epic’ (2013). 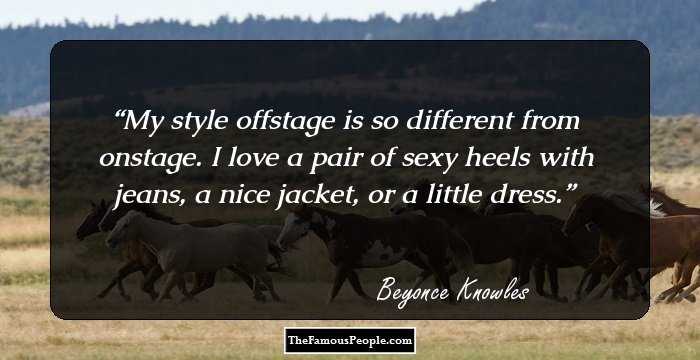 Quotes: Love
Continue Reading Below
Major Works
Her debut album, ‘Dangerously in Love’ was the one which successfully cemented her reputation as a solo artist. The album which debuted at No.1 on the U.S. Billboard 200 chart was a big commercial as well as critical success which earned her five Grammy Awards.

The album ‘B’Day’ registered her highest debut-week sales. It included the hit singles ‘Déjà vu’, ‘Irreplaceable’ and ‘Beautiful Liar’. It was successful not just in the U.S. but also internationally and was accredited multi-platinum.

‘I Am… Sasha Fierce’ was one of the most successful albums of her career so far. The album was inspired by folk and alternative rock and went on to be platinum certified in over 17 worldwide markets. The album garnered a whooping eight Grammy Award nominations, winning five of them.
Awards & Achievements
She has won 17 Grammy Awards from 46 nominations, becoming the third most honored woman in Grammy History. Her most recent Grammy win is for Best Traditional R&B Performance for the song ‘Love on Top’ in 2013.
She is the recipient of nine BET Awards from 30 nominations including the one for Best Female R&B Artist in 2011. 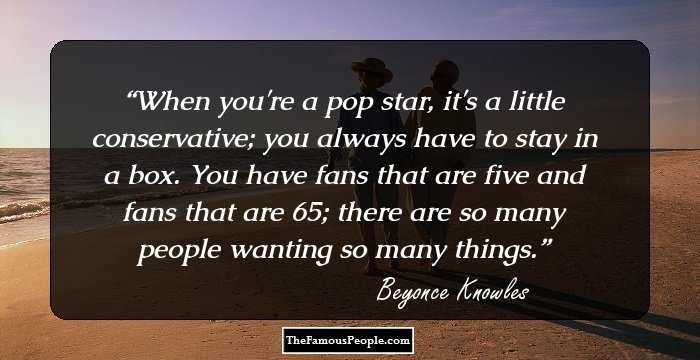 Personal Life & Legacy
She married singer Jay-Z in 2008 and gave birth to her first child, a daughter, in 2012.
She along with Rowland founded the Survivor Foundation in 2005 to provide transitional housing for victims of Hurricane Katrina in 2005.
She was named an ambassador for the 2012 World Humanitarian Day campaign for which she donated her song ‘I Was Here’ and its music video.
Trivia
Several artists like Adele, Rihanna, Leona Lewis and Misha credit this singer as their biggest influence.
A species of Australian horse fly was named ‘Scaptia beyoncea’ in her honour by the research scientist Bryan Lessard in 2012.

Quotes By Beyonce Knowles | Quote Of The Day | Top 100 Quotes

See the events in life of Beyonce Knowles in Chronological Order 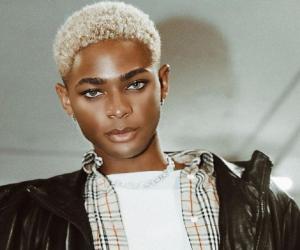