(Socialite & Referred to as 'The first American Flapper' by Her Husband 'F. Scott Fitzgerald')

Advanced Search
Zelda Fitzgerald was the wife of American novelist, Scott Fitzgerald and the couple was counted amongst the celebrated figures of their time. She was glamorous, ambitious and fun-loving and did not want to remain in her husband’s shadow and tried to create a niche for herself first as a writer and later as a dancer. Her husband, Scott, probably felt threatened by this and constantly tried to pull her down. She went too far with her totally fearless and headstrong behavior and some even labeled her crazy. Her husband was not recognized for his writings while he was alive and became very bitter. He would borrow material from her diary entries for his novels which she resented. He thwarted her efforts to write and therefore she turned to ballet dancing and painting. Diagnosed as a schizophrenic, she, like her husband was recognized only after death. Some of the later works and inquiries on her were sympathetic to her and claimed that Scott was a tyrannical and domineering husband. She continues to fascinate and inspire feminists even today. Her struggles to break free from her husband’s control and chart her own course, both as an artist and a woman, has earned her a place among the leading female figures of the 1920s. Cause of Death: Accidental Fire

American Celebrities
Novelists
Socialites
American Women
Leo Writers
Childhood & Early Life
Zelda Fitzgerald was born in Montgomery, Alabama, the youngest of six children, to Minerva Buckner and Anthony Dickinson Sayre, a justice of the Supreme Court of Alabama.
An extremely active child, she took ballet lessons and enjoyed the outdoors. She was a bright student but was not too academically inclined. She was enrolled at the Sidney Lanier High School in 1914.
She graduated from Sidney Lanier High School having been voted the Prettiest and Most Attractive girl in her class. She met her future husband Scott Fitzgerald at a Montgomery Country Club Dance in 1918. 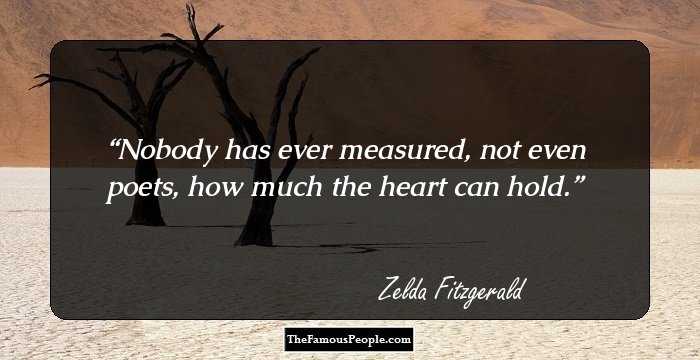 Quotes: Heart
Continue Reading Below
Career
In 1922, asked to write a review of ‘The Beautiful and Damned’ for the New York Tribune, she revealed that Scott lifted material from her diaries in her typical cheeky fashion. This review was well written and she received offers to write for magazines.
In June 1922, she wrote an essay, ‘Eulogy On The Flapper’, for the ‘Metropolitan’ Magazine. In this essay, she mourned the decline of flapper lifestyle and defended her own unconventional and audacious existence.
She continued writing several short stories and articles and helped her husband write the play, ‘The Vegetable’, in 1923. The play flopped and due to their extravagant lifestyle, they found themselves in debt.
They moved to Antibes on the French Riviera where she became infatuated with a French aviator, Edouard Jozan. The affair blew away but her relation with her husband became embittered beyond repair.
Her short essay, ‘Does A Moment Of Revolt Come Sometime To Every Married Man?’, appeared in the magazine, ‘McCall's’, in 1924 and she started painting as a hobby.
In 1925, Scott met Ernest Hemingway and became thick friends with him, something she did not approve of. She even accused her husband of having a homosexual affair with Hemingway.
In 1929, she was invited to join the ballet school of the San Carlo Opera Ballet Company in Naples, but she declined. Scott considered her obsession with ballet a waste of time.
In 1930, she was diagnosed as a schizophrenic and admitted to a sanatorium in France. Her father’s death and Scott leaving for Hollywood took its toll and she returned to the sanatorium.
Her paintings drawn in and out of sanatoriums, exhibited in 1934, were received unenthusiastically. Her husband, now bitter with successive failures, had become an alcoholic and was having an affair with a movie columnist.
Continue Reading Below
In 1940, Scott died working on his last novel, ‘The Love of the Last Tycoon’. She convinced Edmund Wilson, the literary critic, to edit the work.
After Scott’s death, she began working on a novel, ‘Caesar's Things’ which she never completed. 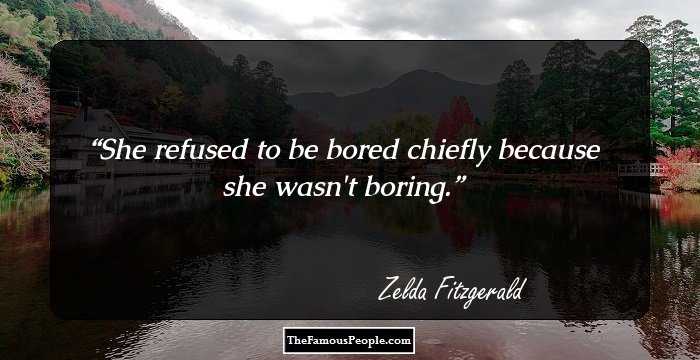 Major Works
‘Save Me the Waltz’, Zelda Fitzgerald’s only novel is a semi-autobiographical account of her life and marriage to Scott Fitzgerald. Published in 1932, it was not well received and sold only 1392 copies.
‘The Collected Writings’, a comprehensive collection of her works published in 1991, is a confirmation of her place as a writer and consists of her farce, short stories, articles and letters.
Personal Life & Legacy
In 1920, she and Scott married at St Patrick’s Cathedral in New York and the couple became well-known for their wild behavior.
In 1921, Zelda gave birth to Frances "Scottie" Fitzgerald. Not interested in domesticity or housekeeping, she presumably had an abortion when she became pregnant again in 1922. This incident found its way in Scott’s novel, ‘The Beautiful and Damned’.
Zelda died in a fire at the Highland Hospital in 1948 and was buried originally in Rockville, Maryland alongside Scott. She was survived by her only child, Scottie.
In 1970, Nancy Milford, a graduate student at Columbia University, published ‘Zelda: A Biography’. The book presented her as an artist in her own right, whose talents were belittled by a controlling husband.
‘Witchy Woman’, a song written by Don Henley and Bernie Leadon for the Eagles in 1972 was inspired by her and refers to her wild detrimental partying and her time in the mental institution.
In 1989, the ‘F. Scott and Zelda Fitzgerald Museum’ was opened in Montgomery, Alabama in a house they briefly rented, where some of Zelda's paintings are kept on display. 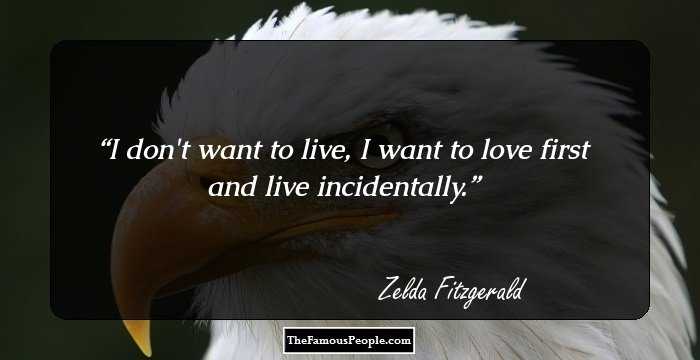 Quotes: Love, I
Trivia
‘I don't want to live. I want to love first, and live incidentally’— these were the words of this American writer, who was as a leading feminist.
This famous personality was described by her novelist husband as, ‘the first American Flapper’, in reference to her carefree attitude and lifestyle.

Quotes By Zelda Fitzgerald | Quote Of The Day | Top 100 Quotes

See the events in life of Zelda Fitzgerald in Chronological Order