(One of the World’s Most-Accomplished Filmmakers Known for His Unique Blend of Comedy and Style.)

Having a penchant for humor and wit, Woody Allen still stands strong for his age in the entertainment industry and is respected by the world for his ability to express his feelings and emotions using slapstick humor. Magnificently endowed in the field of creativity, Allen has made a mark not only as a comedian but as an actor, director, playwright and jazz musician. In his five decade long career, Allen has given the world numerous movies and theatrical works which are going to be influential and inspirational for the sheer sense of novelty and ingenuity that they carry. His long list of work has touched the various genres of humor, right from slapstick to satirical and even dark comedy. Interestingly, the actual personality of Allen is arch different from what he puts up on stage, as a neurotic, nervous and intellectual person. He carries the same persona for the big screen as well. For most of his movies, Allen has drawn inspiration from literature, philosophy, psychology, Judaism, European cinema and New York City. It is due to his sheer aptitude in filmmaking that he has been known the world over as one of the most prolific and gifted filmmakers of the modern era. American People
Directors
Screenwriters
Stand-up Comedians
American Men
Childhood & Early Life
Born as Allan Stewart Konigsberg to Nettie and Martin Konigsberg, Woody Allen was the first child of the two children of the couple. His sister, Letty, was born in 1943.
Allen’s childhood was not a very remarkable one - the tempestuous relationship of his parents and the temperamental nature of his mother Nettie left a bad impact on young Allen.
He changed various schools and educational institutes at a young age before enrolling himself at the Midwood High School. Allen was not particularly interested in course curriculum and instead showed greater interest in extra-curricular activities.
At the age of seventeen, Allen legally changed his name to Heywood Allen with an aim to salvage himself from the ill treatment meted out to him at the inter-faith summer camps by other children of different race and creed.
Post high school, he attended New York University, where he studied communication and film. After a brief stint at the City College in New York, where he flunked out, Allen switched to self-study. 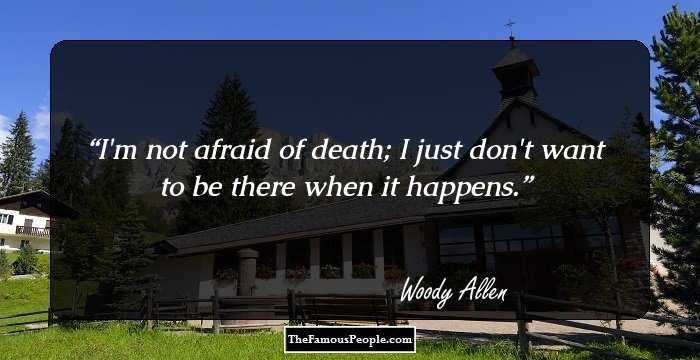 Quotes: I
Continue Reading Below
Career
Endowed with an exemplary skill for writing gags, Allen’s career took shape when he was still in high school. He started writing monologues and became a full time humourist.
His career took-off in the year 1954 when he assisted Caesar in writing scripts for shows such as The Ed Sullivan Show, The Tonight Show, and the rest. It was during this time that Allen’s writing style took a definite form.
Allen inherited the nature of work wanderlust from his father, jumping from one project to the other when he got bored. As such, in 1961, he tried his hand at stand-up comedy, his debut being at a Greenwich Village Club, called Duplex.
The sharp wit, concise one-liners, and boxer timing helped Allen bring innovation and style in the genre of comedy monologues. His stand-up comedy was considered influential as was his move of posing as a neurotic, nervous and intellectual persona in the stand-up routine. It was due to this that he secured himself regular gigs at the nightclubs and in television.
He next took to writing short stories and eventually became a playwright. Most of the early comic fictions written by Allen have been inspired by the pun-ridden humor of S. J Perelman.
“Don’t Drink the Water” marked Allen’s debut at Broadway. In the next ventures, apart from merely writing the script, Allen took to acting as well and was featured in a number of self-written plays such as “Play it Again, Sam” and “The Floating Light Bulb” and so on.
The big break, however, came in 1965 when Allen wrote the screenplay for the film, “What’s New, Pussycat?” However, disappointed with the changes brought in the final product, Allen swore to never write another script unless he was the director of the film.
It wasn’t long before Allen donned the hat of a director as his first movie, “What’s up Tiger, Lily?” was released in 1966. Assisted by Mickey Rose, the film was a redubbed product of a Japanese spy film with entirely new, comic dialogues.
After the release of the first film, there was no looking back for Allen as he went on to direct several films. He not only handled the department of screenplay but also went on to star in the films he directed.
Continue Reading Below
While his career was escalating upwards, he was further catapulted to greater fame with the release of “Annie Hall” in 1977. With four Academy Awards, the movie created a stir in the entertainment industry and set the standard for modern romantic comedy.
Next came in Manhattan, which was released in 1979. This movie, too, repeated the success story and enhanced Allen’s position.
In the 1980s, Allen’s works turned somewhat sombre with the comedies having philosophical undertones to them. While he released several movies in this decade, two of his movies, “Stardust Memories” and “The Purple Rose of Cairo”, are worthwhile mentioning.
The 1990s saw Allen switch back to lighter comedy. His films not only gained appreciation of the crowd, but also earned him quite a few Academy Award nominations. At the close of the decade, Allen, however, moved to darker satirical tones, which is reflected in his works - “Deconstructing Harry” and “Celebrity”.
Year 2000 saw Allen collaborating with Dreamworks. The films released during this period not only represented a change in direction but also highlighted the urge of Allen to return to slapstick humor, one which he specialized in right from a tender age. The decade was a mixed one for Allen, bringing forth huge success and failures.
Lately, Allen has released two movies “Midnight in Paris” in 2011 and “To Rome with Love” in 2012. While the former marked his return to form, overtaking his most successful film at the box-office and garnering much success and critical acclaim, the latter marked his return to acting. 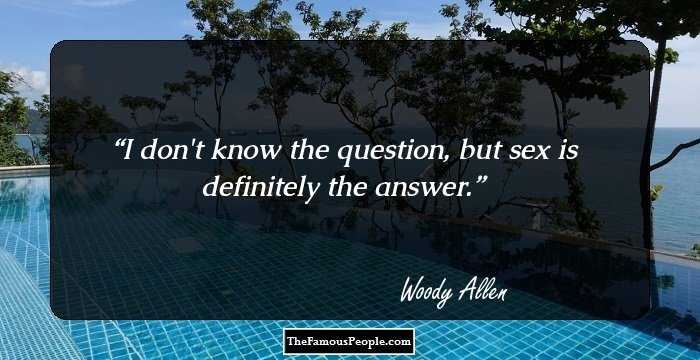 Quotes: I
Major Works
“Annie Hall” marked Allen’s walk to fame. It not only garnered a lot of critical acclaim and positive response but went on to win four Academy Awards. What’s more, the film is ranked at No. 35 on the American Film Institute's "100 Best Movies" and at No. 4 on the AFI list of "100 Best Comedies."
“Match Point” significantly enhanced Allen’s reputation as a film-maker. The film earned more than $23 million domestically and over $62 million at international box office.
Continue Reading Below
Till date, “Midnight in Paris” is Allen’s most successful film at the box office in United States. 93% of critics at Rotten Tomatoes have given the film a thumbs-up. It has earned more than $56 million in North America, thus becoming the highest grossing film of Allen. It won numerous awards, including Golden Globe Award, Academy Awards and Goya Award (Spanish equivalent of Academy Award).
Awards & Achievements
For his outstanding contribution to cinema, he has been nominated for the Academy Awards 23 times in various categories. He has received the award four times.
Out of 18 nominations, he has won the BAFTA Awards 9 times. He even received the honorary BAFTA Fellowship for his work.
At the Golden Globe Awards, he has been nominated 12 times. He has won the award thrice.
He is also the proud recipient of several Lifetime Achievement Awards - Venice Film Festival, Director Guilds of America and Cannes Festival. 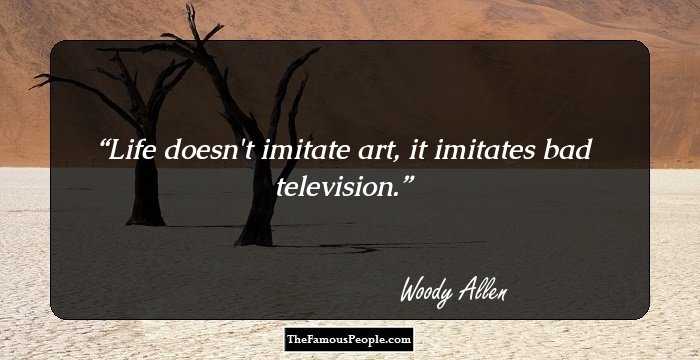 Quotes: Life, Art
Personal Life & Legacy
Allen tied the nuptial knot thrice, first to Harlene Rose (1954-59), then to Louise Lasser (1966-69) and lastly to Soon Yi Previn (1997-present).
He is said to have shared romantic liaisons with a few others namely Diana Keaton, Stacey Nelkin and Mia Farrow.
He has two adopted daughters, Bechet Dumaine (1999) and Manzie Tio (2000).
Trivia
Often mistook as a studious chap, he was more interested in baseball and was usually the first to be picked for a team.
While his sharp wit, slapstick and crackled humor was the reason for his widespread popularity, initially this able writer impressed fellow students with his extraordinary talent at card and magic tricks.
UK poll ‘The Comedian's Comedian’, voted him the third greatest comedy act ever by fellow comedians and comedy insiders in 2005.
Little does the world know that this celebrated writer is a passionate fan of jazz music, which is why the same prominently feature in many of his films. He has performed publicly since 1960s. His New Orleans band has played at various hotels, concerts and festivals.

Quotes By Woody Allen | Quote Of The Day | Top 100 Quotes

See the events in life of Woody Allen in Chronological Order