(One of The World's Best-selling Music Artists of All Time)

Advanced Search
One of the most popular singers of the 20th century and an Academy award winning actor, Frank Sinatra was the darling of the American audiences for decades at a stretch. Counted among the all-time best selling artists, his albums have sold more than 150 million records worldwide. Having entered show business during the 1930s, he gave his last performance in the 1990s! Over his incredibly long career he has entertained several generations of music lovers and cinema goers with his melodious voice, acting skills and charismatic personality. From a young age little Frank knew that he was meant to be a singer. While in high school he was unruly and rowdy and dropped out without graduating. A big fan of Bing Crosby, he had started singing for tips as a child and became a professional in his teens. After playing with some bands he launched his solo career and found great success which prompted him to venture into films. There too he was successful though success did not come easily to him. He experienced his share of difficulties though he always managed to bounce back. Being both a popular singer and a critically acclaimed actor greatly added to his mass appeal and he is considered to be one of the greatest entertainers in American history. Image Credit
https://commons.wikimedia.org/wiki/File:Frank_Sinatra_(1957_studio_portrait_close-up).jpg
(English: Photograph by Capitol Records, per a credit found in the 1959 edition of the International Celebrity Register at page 696. No known source credits an individual photographer., Public domain, via Wikimedia Commons)

epitaphs: The best is yet to come.

American Celebrities
Pop Singers
American Men
New Jersey Actors
Male Singers
Childhood & Early Life
He was born as Francis Albert Sinatra to Antonino Martino Sinatra and Natalina Garaventa, Italian immigrants to New Jersey. He was the only child of his parents. His father was a fire-fighter and his mother was an amateur singer.
He did not attend high school for long. He was a rowdy teenager and was expelled from school.
He always loved music and knew that he wanted to be a singer. He became a professional singer when he was just in his teens. 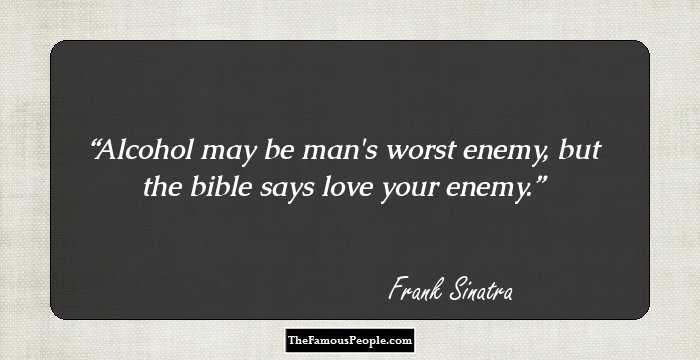 Quotes: Love
Continue Reading Below
Career
He started performing in night clubs after leaving school and joined a local band called The Three Flashes in 1935 which was renamed The Hoboken Four upon his joining. They appeared in Edward Bowes’s show ‘Major Bowes Amateur Hour’.
During the late 1930s he joined Tommy Dorsey and his orchestra which gave a big boost to his career. Soon Sinatra became a very popular singer because of his association with Dorsey though the relationship between the two men soured. He left the band in 1942.
In 1946, he released his first studio album, ‘The Voice of Frank Sinatra’ which peaked at No. 1 on the Billboard chart and retained its position for the next seven weeks!
Over the next few years he released ‘Songs by Sinatra’ (1947), ‘Christmas Songs by Sinatra’ (1948), ‘Frankly Sentimental’ (1949) and ‘Dedicated to You’ (1950). However, none of these albums was as successful as the first one.
He ventured into Hollywood as an actor during 1940s and in 1953 the film ‘From Here to Eternity’ was released. The story revolved around three soldiers stationed on Hawaii in the months leading up to the attack on Pearl Harbor. It was a super hit.
In 1960 his album ‘Nice ‘n’ Easy’ was released. It reached the No. 1 spot on the Billboard chart where it spent nine weeks. It was nominated for the Grammy Award as Album of the Year, Best Male Vocal Performance, and Best Arrangement.
He acted in the World War II adventure film ‘Von Ryan’s Express’ in 1965 which was about a group of Allied prisoners who attempt a daring mass escape after Italy's armistice with the Allies in September 1943.
He brought out a concept album ‘Watertown’ in 1970 which is the tragic story of a man whose wife leaves him and their two children and moves to a big city. The album received mixed reviews upon its release.
In 1971, Sinatra announced that he was retiring. But he could not stay away from the work he loved for long and was soon back to show business. Over the next several years he continued producing albums and appeared in many films much to the delight of his devoted fans.
Continue Reading Below 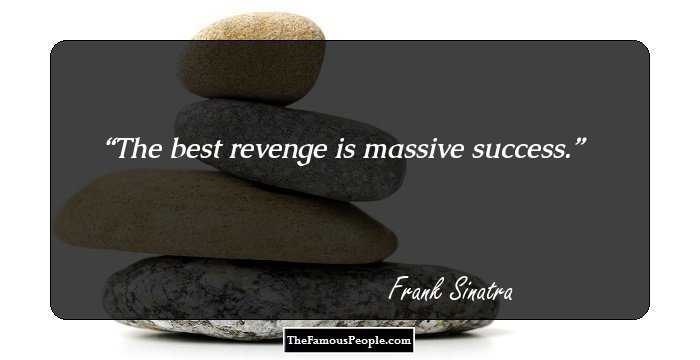 Major Works
His solo debut album, ‘The Voice of Frank Sinatra’ was a major hit which established him in his solo career. This album consisted of eight songs and reached the No. 1 spot on the Billboard chart.
The album ‘Frank Sinatra Sings for Only the Lonely’ released in 1958 was the one Sinatra considered his personal favorite. A collection of torch songs, it peaked at No. 1 position in the US and was accredited gold.
Awards & Achievements
He won the Academy Award for Best Supporting Actor in 1953 for his role as Private Angelo Maggio in ‘From Here to Eternity’.
He won 11 Grammy awards throughout his singing career, including the Grammy Lifetime Achievement Award in 1966.
In 1966, he won the Peabody Award for ‘A Man and His Music’ a one hour television special in color, broadcast by NBC.
He was presented with The Presidential Medal of Freedom, the highest civilian award in the US by President Ronald Reagan in 1985. 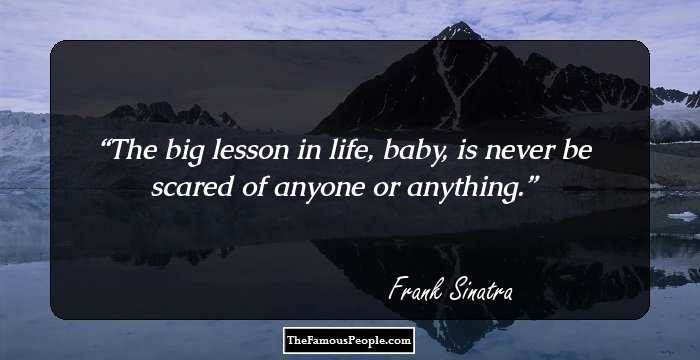 Quotes: Life, Never
Personal Life & Legacy
Frank Sinatra was married four times. He had three children with his first wife Nancy Barbato to whom he was married from 1939 to 1951.
His second marriage was to actress Ava Gardner from 1951 to 1957. Then he was briefly married to Mia Farrow for two years from 1966 to 1968.
His final marriage was to Barbara Marx in 1976. The couple remained together until his death.
He lived a long life and suffered some health problems including high blood pressure and bladder cancer during his last years. He died of a heart attack in 1998 at the age of 82.

Quotes By Frank Sinatra | Quote Of The Day | Top 100 Quotes

See the events in life of Frank Sinatra in Chronological Order