Advanced Search
Flavia Cacace is an Italian–British professional dancer and choreographer. Trained in dance since a tender age, she has been a regular in the competition circuit for several years. Cacace and professional dancer Vincent Simone have been professional dance partners for almost a decade now. The two began as amateur ballroom and Latin American dancers. They eventually started participating in national and international championships. Branded as ''Vincent and Flavia,” they have won a host of titles, such as the first-ever 'UK Argentine Tango' championship in 2006 and the 'World Argentine Tango Show' championship (2005/2006). They have also been 'UK Ballroom' champions for several years. The incredible duo went mainstream with the TV reality show 'Strictly Come Dancing' and gained international fame for their self-created version of the Argentine tango. Apart from Vincent, Cacace has partnered with several other celebrities on the show. Ruggero Pasquar...
DID WE MISS SOMEONE?
CLICK HERE AND TELL US
WE'LL MAKE SURE
THEY'RE HERE A.S.A.P
Quick Facts

British People
Italian People
Film & Theater Personalities
British Women
Italian Women
Female Dancers
Childhood & Early Life
Cacace was born on March 13, 1980, in Naples, Italy. She was the youngest of the six children in the family. Her father, Roberto Cacace, was a chef, and her mother, Rosaria Cacace, was a homemaker. She was 4 when her family moved to the United Kingdom
Cacace attended the 'Sandfield Primary School,' the 'St. Peter's Catholic School,' and the 'St Thomas Of Canterbury,' all located in Guildford, Surrey.
She was 6 when she began taking ballroom and Latin dance classes at a dance studio in Guildford. She even started earning at 12, when her teacher asked her to train the younger children. She would earn up to £12 back then.
As soon as Cacace began learning dance, she began to win the junior medals (known as rosettes). A few years later, she ventured into competitive dance on her teacher's advice. She also took up part-time jobs to support her expenses.
After leaving 'St. Thomas,' Cacace attended college to study Italian, graphic design, media studies, and law.
In the mid-1990s, Cacace met aspiring dancer Vincent Simone from Italy. They took lessons from the same teacher and eventually became dance partners, ruling competitions for several years. Together, they performed in Singapore, Canada, and Japan.
However, despite their success, they were far from being professional. Additionally, the prize amount from the competitions was just not enough for them to pursue such an expensive career.
When Cacace was about 17, she and Vincent were granted around £800 to cover their expenses.
They finally turned professional, and their earnings from shows, too, improved.
Continue Reading Below
Recommended Lists:

Italian Dancers
British Dancers
British Entertainers
Female Choreographers
Career
In 2005, Cacace and Vincent choreographed a relatively unknown dance style called the Argentine tango and presented it to the audiences. Since then, the dance style gained prominence in the competitive roster.
Over the years, they have participated in major dance events. They were named the 'UK Professional Ten Dance Champions' (2002–2006), the 'UK Professional Showdance Champions' (2003–2006), the 'UK Argentine Tango Champions' (2006), and the 'UK Ballroom Champions.' They were also named 'World and European Ten Dance and Showdance' finalists in 2002–2006.
In 2006, she appeared in the fourth series of the ‘BBC’ reality show 'Strictly Come Dancing,' partnering with comedian Jimmy Tarbuck. Unfortunately, soon after their first performance, the two had to withdraw due to medical reasons.
Cacace and actor Matt Di Angelo partnered for the fifth series of the show. They were the only pair to get a perfect score for their waltz performance in the final round. However, they lost the competition to Alesha Dixon and Matthew Cutler.
With Matt, Cacace performed rumba in the 2007 Christmas special. They competed together in the 2008 live tour of 'Strictly Come Dancing.' They went on to win several more shows and became the dancing pair with the most wins. They participated in 40 shows, topping in 16 and ranking second in 10.
Cacace and actor Phil Daniels participated in the sixth series of 'Strictly Come Dancing’ but were eliminated in the first week, after losing a dance-off to Don Warrington.
In late 2008, she partnered with TV presenter Terry Wogan for the 'Children in Need' special series of 'Strictly Come Dancing.' They both competed against the winning duo of Tess Daly and Anton du Beke.
Cacace and the former semi-finalist of the show, Gethin Jones, participated in the 2009 ‘SCD Live’ tour. They won six of the 45 shows.
Interestingly, she won the second position, while her long-time professional partner, Vincent and his partner, Rachel Stevens, were ranked first.
Continue Reading Below
Cacace and actor Craig Kelly paired for the seventh series of the show in 2009. They were in the bottom two in the second week and had to perform a tango again. With similar progression in the subsequent weeks, the duo registered their lowest score of the competition until that point. However, dance-off public votes saved them from elimination. The two were finally eliminated in the eighth week.
She partnered with Gethin Jones again, for the 2009 Christmas special. They performed an American smooth to 'Baby It's Cold Outside.' Cacace choreographed Gethin's dance routine for the 'Yvonne Arnaud Theatre' production of 'Cinderella' in Guildford. She also made a guest appearance on the final show of the panto.
For the eighth series of 'Strictly Come Dancing,' Cacace partnered with actor Jimi Mistry. They were eliminated in the sixth week, despite being at the fourth position on the leaderboard. The elimination was a shock to many, and her fans, too, raised questions about the fairness of the result.
In the ninth series of the show, Cacace and astrologer Russell Grant came together and were the seventh pair to be eliminated. More than their dance skills, the entertainment quotient of their acts had kept them safe till their elimination.
Cacace scored her first 'Strictly Come Dancing' victory on December 22, 2012 (tenth series), sharing it with gymnast Louis Smith. In January that year, she made an appearance in the ‘BBC TV’ drama 'The Magicians.'
On June 1, 2013, Cacace and Vincent announced that they would not appear in the upcoming season of 'Strictly Come Dancing,' as they wished to take up other projects.
Along with Vincent, Cacace owns a mobile app called 'Dance with Vincent and Flavia,' published by 'International Celebrity Networks.' The app offers free dance tutorials. They have also released a series of DVDs titled 'Vincent and Flavia School of Dance,' consisting of ballroom and Latin dance tutorials. They have also released three DVDs containing Argentine tango tutorials.
The two have toured with several dance theater productions all over the U.K.
Their first production was the 2013 dance musical 'Midnight Tango,' based on the Argentine tango dance form. The musical toured successfully for 3 years and had two ‘West End’ runs. Following this, they teamed up for the comic murder-mystery dance musical 'Dance 'til Dawn.'
Cacace and Vincent continue to appear in their own ‘West End’ shows, such as 'The Last Tango.' They have also bagged two 'Olivier Award' nominations for family entertainment.
In 2018, they performed in the ‘BBC Tango Prom' and also appeared in 'Snow White' (staged at the 'London Palladium’).
She has also performed on shows such as 'Dance Fever,' ‘Sunday Night at the London Palladium,' the ‘Royal Variety Performance’ at the 'London Palladium,' 'Ant & Dec’s Saturday Night Takeaway,’ 'The Generation Game,' 'Surprise Surprise,' 'Mel & Sue,' and 'The Paul O'Grady Show.'
Recommended Lists:

British Female Dancers
British Choreographers
Italian Choreographers
British Female Choreographers
Personal Life
Cacace and Vincent dated for 11 years, finally breaking up in 2007. She then dated her 'Strictly Come Dancing' partner Matt Di Angelo, from 2007 to 2010.
Since 2011, she has been in a relationship with Jimi Mistry. They lived together in Jacobs Well, Surrey. Cacace announced her engagement with Jimi through a ''tweet" on January 5, 2013. They got married on December 28, 2013, in London.
She and Jimi established the website ‘FCMFIT’ in 2019. The site focuses on fitness, nutrition, and life. In an attempt to rejuvenate herself after handling years of rigorous schedules as a dancer and choreographer, Cacace wanted to do something different.
Soon, she came across the 'Optimum Performance Training Model' (OPT), which helps in maintaining muscular balances in the human body. She then joined the 'National Academy of Sports Medicine' and received a ‘CPT L3’ diploma and certification as a nutritional advisor. She also obtained an OPT certificate.
Cacace and Jimi own two dogs: a Cockapoo and a mongrel rescue dog.
Recommended Lists:

See the events in life of Flavia Cacace in Chronological Order 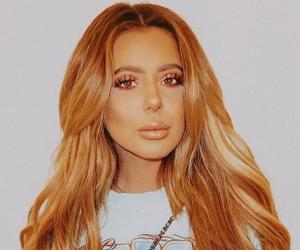