Eva Braun is popularly known as Adolf Hitler’s longtime companion and wife; she was married to him for less than 40 hours. Born in a middle-class family, she studied at the ‘Catholic Institute.’ After completing her education, Braun worked as a sales woman. She later worked as an assistant under Heinrich Hoffman, who was the official photographer of Hitler, the popular Nazi leader. It was while working for Hoffman that Braun was first introduced to Hitler. Though the two shared a romantic relationship that lasted more than 12 years, the relationship was not known to the public as Hitler never allowed her to be seen with him in public. Furthermore, despite being his love interest, Braun had no political influence on him whatsoever. Regardless of her desolated life, as Hitler was engrossed in his political ambitions, her loyalty for him never flagged. In fact, she promised to be by his side even at the time of death. Ri Sol-ju
DID WE MISS SOMEONE?
CLICK HERE AND TELL US
WE'LL MAKE SURE
THEY'RE HERE A.S.A.P
Quick Facts

Eva Braun was born on 6 February 1912, in Munich, Bavaria, German Empire, to Friedrich ‘Fritz’ Braun and Franziska ‘Fanny’ Kronberger. She was the second daughter of the couple. While her father was a school teacher, her mother worked as a seamstress.

She completed her formal education at the Catholic lyceum before enrolling at the ‘Convent of the English Sisters’ in Simbach am Inn. She studied at the business school for a year.

After completing her education, she took up work as a shop assistant and sales clerk at the office of Heinrich Hoffmann, the official photographer of the ‘Nazi Party.’ She then learned the art of photography and was able to click photographs and develop them. 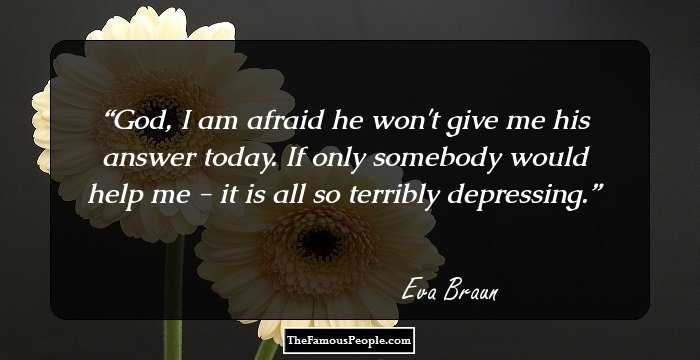 She first met Hitler at Hoffman’s studio in October 1929. The popular Nazi leader was introduced to her as ‘Herr Wolff.’

The death of Hitler’s half-niece, with whom he lived in an apartment in Munich, drew Hitler towards her. In 1932, she tried to kill herself. Luckily, she failed and the incident led Hitler to become more committed towards her.

In 1935, she attempted suicide for the second time by consuming several sleeping pills. She wanted to take her own life as Hitler was not willing to spend more time with her. However, she recovered and started spending time with Hitler at his household in Berghof near Berchtesgaden.

In 1935, she attended the Nuremberg Rally for the first time as a member of Hoffman’s staff. Later in her career, she worked for Hoffman's art press.

Though they were in love, Braun and Hitler were not spotted together at public events. Instead, they preferred to remain apart as Hitler believed that his popularity would decrease if he married her. In fact, Germans did not know about the romantic relationship between the two until after the war.

Adhering to the minimal role that women took in the affairs of the state, Braun hardly had any political influence on Hitler. The only activities that interested her were sports, shopping, and watching films. 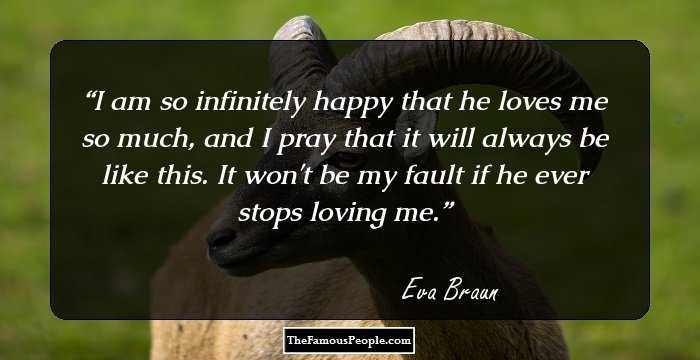 In 1945, she moved to Berlin from Munich to be with Hitler. The two tied the nuptial knot after midnight on the night of 28–29 April, in a private civil ceremony within the Führerbunker. Post marriage, she legally became Eva Hitler.

The following day, in late afternoon, as the two reclined in a small study, a gunshot was heard. It was later found that she had bitten into a cyanide capsule, while he had shot himself in the right temple with his pistol. Their bodies were burned in the garden behind the Reich Chancellery.

The ashes were secretly buried at the SMERSH compound in Magdeburg, East Germany, along with the bodies of Joseph and Magda Goebbels and their six children.

The fact that she was a companion and later wife of Adolf Hitler remained a well-guarded secret until their death. 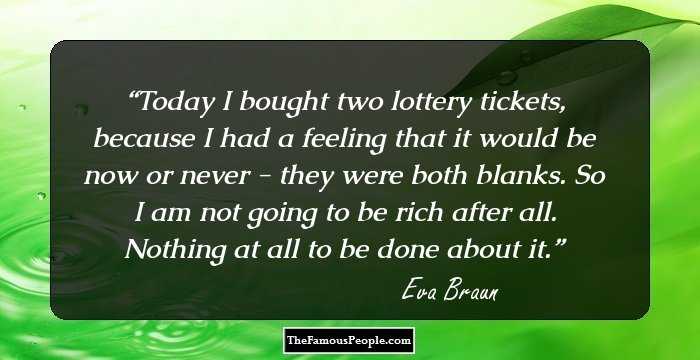 See the events in life of Eva Braun in Chronological Order 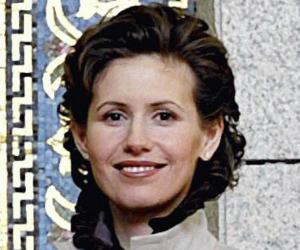