Ethan Coen is an American filmmaker who has, together with his brother Joel Coen, written, produced, directed and edited a number of successful and acclaimed films. These include Barton Fink, Fargo, The Big Lebowski, O Brother, Where Art Thou?, No Country for Old Men and True Grit. Since the beginning of their career in 1984 till 2003, though the brothers were involved in both production and direction of the movies, Ethan Coen was credited as the producer while the credit for direction went to Joel. This changed later with the 2004 film The Ladykillers from which the brothers were credited both as the directors and producers of their films. The Coen brothers share the writing credits jointly and, under the pseudonym of Roderick Jaynes, also edit their films together. The brothers have received several awards for their work and their best director Academy Award for No Country for Old Men was the first where two directors received the honours together since 1961. For a number of films, the brothers have just written screenplays. These include Angelina Jolie’s directed Unbroken and Steven Spielberg directed Bridge of Spies. Apart from filmmaking, Ethan Coen has also written several stage plays, directed numerous commercials and penned a fiction book and a couple of collection of poems books as well. He made his solo directorial debut in 2022 with the documentary film Jerry Lee Lewis: Trouble In Mind. 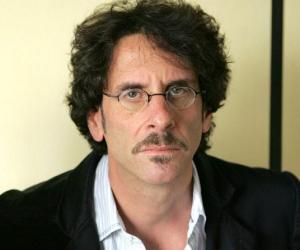 Ethan Coen or Ethan Jesse Coen was born on 21 September 1957, in St. Louis Park, Minnesota, Minneapolis, to Rena Neumann Coen and Edward Coen. He has an older brother named Joel Coen and a sister named Deborah who is a psychiatrist by profession.

His mother was employed as an art historian at St. Cloud State University, while his father served in the United States Army during World War II and then worked as an Economics Professor at the University of Minnesota.

Ethan Coen went to St. Louis Park High School from where he graduated in 1976. Thereafter, he studied at the Bard College at Simon's Rock in Great Barrington, Massachusetts. He then pursued studies in philosophy from the Princeton University.

The Coen brothers were interested in watching and making films from very early. They saved money to buy a Super-8 camera which they used to remake their favourite movies as well as to make some new ones. Their original movies included Henry Kissinger - Man on the Go, Lumberjacks of the North and The Banana Film.

After Princeton, Ethan Coen joined his brother Joel Coen in New York and took up a series of temporary office jobs including one as statistical typist at Macy's department store.

Their first commercial film project together was the 1984 film Blood Simple which they wrote, produced, directed and edited together.

From this time up until 2004, though the brothers were involved in all aspects of film making, yet Joel was credited as the director while Ethan was credited as the producer of the film. The brothers shared the credits for screenplay writing and additionally also edited their films jointly under the alias Roderick Jaynes.

After the critical and commercial success of their first film, the brothers’ next project together was Crimewave (1985) for which they co-wrote (with Sam Raimi) the screenplay and also did uncredited acting roles.

Amongst these, Barton Fink and Fargo stood out winning not just commercial success but nominations and wins at various award functions. While the former bagged three major awards (including best picture award) at the 1991 Cannes Film Festival, the latter won two Academy Awards including one for original screenplay.

The Hudsucker Proxy was their first big Hollywood venture; however, it was a massive failure.

The Big Lebowski was not successful when it came out; however, now it has received the status of a cult classic film.

Apart from films, the 1990s also saw the publication of Gates of Eden (1998), a collection of short stories written by Ethan Coen. A few years later, in 2001 another of his book – a collection of poems – titled The Drunken Driver Has the Right of Way: Poems was released.

In films, he next co-wrote, produced and co-edited O Brother, Where Art Thou? (2000), The Man Who Wasn't There (2001) and Intolerable Cruelty (2003). Together with his brother, he also executive produced the documentary and concert film Down from the Mountain (2000) and a black comedy film Bad Santa (2003). They also did uncredited rewrite work on Bad Santa.

The 2004 film, The Ladykillers, was the first film where both the brothers received director and producer credits. They were also the writers and editors of the film which did not get a positive response.

In 2012, another of his book – a collection of poems – titled, The Day the World Ends: Poems, came out. He has directed numerous commercials too – both solo as well as with his brother.

In May 2022, Ethan Coen made his solo directorial debut by making the A24 documentary film Jerry Lee Lewis: Trouble In Mind. It premiered at the Cannes Film Festival.

Ethan Coen’s first marriage was with a woman named Hillary. They married in 1985 but divorced shortly afterwards. In 1990, he married Tricia Cooke and the couple have a son named Buster Jacob and a daughter named Dusty.

See the events in life of Ethan Coen in Chronological Order