Elizabeth Hurley, also known as Liz Hurley, is a British model and actress. She has always been in the limelight, for both right and wrong reasons. One of the most desirable women in the world, Hurley is also one of the most photographed women. She had a colorful early life as she dabbled in ballet and punk fashion. She was also involved with the ‘New Age Travellers,’ a hippie group in Britain. She gained worldwide recognition when she walked down the red carpet with her then-partner Hugh Grant at the premiere of his film. Although Grant was more popular, Liz stole his thunder and grabbed all the attention with her bold ‘Versace’ dress, which was held together by giant gold safety pins. Hurley capitalized on her sudden fame and went on to establish a very successful modeling career. Though she has achieved only moderate success as a film actor, her modeling career as well as her well-publicized personal life has kept her in the limelight. In her turbulent personal life, Liz has had to put up with cheating partners, break-ups, outspoken in-laws, and paternity suits. In spite of her difficult personal life, Liz has managed to emerge unscathed and continues to enjoy fame and attention. Kate Winslet
10th June In History
DID WE MISS SOMEONE?
CLICK HERE AND TELL US
WE'LL MAKE SURE
THEY'RE HERE A.S.A.P
Quick Facts

By the age of 12, Elizabeth knew that she wanted to be a dancer. Hence, she was enrolled to a private boarding school, specializing in ballet. Later, she earned a scholarship to study dance and theatre at the ‘London Studio Centre.’

As a teenager, she joined the ‘New Age Travellers,’ a hippie group from the UK, before getting influenced by punk fashion. Her exposure to punk fashion led her to color her hair and wear a nose ring. 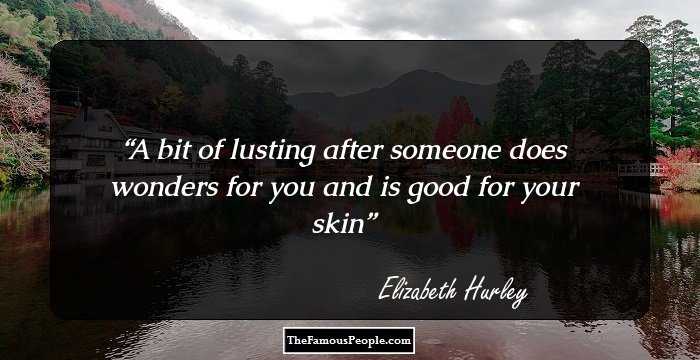 During her early days, Hurley won a ‘Face of the Year’ competition which was organized by a local newspaper. She was rewarded with a one-year contract with a top company in London.

In 1987, she landed her debut film role in ‘Aria,’ a movie that consisted of 10 short films. The film was screened at the 1987 ‘Cannes Film Festival.’

In 1988, ‘Christabel,’ a TV show featuring Hurley in the lead, was released. In the show, Hurley played the role of an English woman who gets married to a German lawyer.

She also played a lot of cameo roles during this period, appearing in shows like ‘Inspector Morse,’ ‘The Good Guys,’ and ‘Sharpe.’

In 1994, her then-partner Hugh Grant founded a production company called ‘Simian Films,’ for which Hurley was assigned as development head to scout for projects.

In 1995, the well-known cosmetics firm ‘Estee Lauder’ signed her as their spokesmodel, a position which she held till 2001, when she was replaced by Caroline Murphy.

In 1997, she starred as ‘Vanessa Kensington’ alongside Mike Myers in the hit action comedy film ‘Austin Powers: International Man of Mystery.’ A couple of years later, she followed it up with a guest appearance in the film’s sequel ‘Austin Powers: The Spy Who Shagged Me.’

In 2000, she flouted a five-month acting-strike imposed by the ‘Screen Actors Guild’; she acted in a commercial for ‘Estee Lauder’ and had to pay a penalty of $100,000. The same year, she was seen in the French-American mystery thriller film ‘The Weight of Water,’ which also featured Sean Penn.

In 2001, Hurley was part of ‘The Human Face,’ a four-part documentary about the effects of facial expressions and features. It was narrated by British actor-comedian John Cleese.

In 2002, she acted in the film ‘Serving Sara.’ The film’s failure led Hurley to stop acting in films in the US and focus more on her modeling career.

In 2005, she modeled for firms like ‘Saloni,’ ‘Liverpool Department Stores of Mexico,’ and ‘Lancel.’ The same year, she also launched her own beachwear line called ‘Elizabeth Hurley Beach’ at ‘Harrods’ in the UK.

In 2006, she appeared in the advertising campaigns for brands like ‘Jordache,’ ‘Shiatzy Chen,’ ‘Got Milk?,’ ‘Patrick Cox,’ and ‘MQ Clothiers of Sweden.’

In 2006, she hosted the British reality show ‘Project Catwalk’ and received a lot of flak for it. She was replaced in the next season, owing to allegations that she had asked the contestants to send her free clothes.

In 2008, Hurley designed and modeled a capsule collection of 12 swimsuits for ‘MANGO,’ a Spanish clothes brand.

In 2011, she acted in the fifth season of the TV show ‘Gossip Girl’ where she portrayed the character of ‘Diana Payne,’ a rich businesswoman from Los Angeles.

From 2015 to 2018, she portrayed the main role of ‘Queen Helena’ in the American primetime television soap opera ‘The Royals.’ She appeared in all the 40 episodes of the show. In 2019, she was cast in the third season of the web television series 'Runaways' where she played ‘Morgan le Fay.’

Elizabeth Hurley started hogging the limelight in 1994 when she wore an iconic ‘Versace’ dress while accompanying Hugh Grant to the premiere of ‘Four Weddings and a Funeral.’ The dress appeared in numerous tabloids worldwide and catapulted Hurley to fame.

In 1995, she was chosen as the face of ‘Estee Lauder’ in spite of not having any previous experience in modeling. Elizabeth Hurley continues to work with the brand and has also been active in their ‘Breast Cancer Awareness Campaign.’

In 1997, Hurley starred as ‘Vanessa Kensington’ in ‘Austin Powers: International Man of Mystery,’ a spoof of older ‘James Bond’ movies. It remains her most loved role and the movie went on to become a cult classic.

She has been featured three times on the cover of ‘British Vogue,’ a popular fashion magazine in the UK. The magazine is often called ‘The Fashion Bible.’

In 1987, when Hurley was not so famous, she met British actor Hugh Grant on the sets of a Spanish movie titled ‘Remando Al Viento.’ She became involved in a well-publicized relationship with him that lasted till 2000.

In 1995, Grant was arrested in Los Angeles for his dalliance with a prostitute named Divine Brown, following which Hurley surprised everyone by not breaking up with him.

In 2000, Hurley and Grant separated, albeit on good terms and have remained friends ever since. They also continued with their business enterprise ‘Simian Films.’

In 2002, Hurley gave birth to a son and named him Damian Charles Hurley. The boy’s father, American producer Steve Bing, initially refused to acknowledge Damian as his son and eventually took a DNA test that confirmed him as the father.

In 2002, Hurley started a relationship with Indian business magnate Arun Nayar. In 2007, Hurley and Nayar got married in two separate ceremonies, first at the Sudeley Castle in England, and then at ‘Umaid Bhawan Palace’ in Jodhpur, India.

The wedding had its share of controversies, as criminal charges were filed against Hurley and Nayar by a religious Hindu community in India for violating wedding customs. This was followed by Nayar’s parents renouncing their son publicly.

Hurley’s marriage with Nayar ended in 2011 when she successfully filed for divorce, stating Nayar’s “unreasonable behaviour” as the cause for divorce. Later that year, she got engaged to former Australian cricketer Shane Warne. In December 2013, Warne and Hurley broke off their engagement.

This beautiful actress caught the attention of many when she wore a ‘Versace’ dress to a movie premiere in 1994 with her then-boyfriend Hugh Grant.

Elizabeth Hurley was approached to represent the famous brand ‘Estee Lauder,’ though she had no prior modeling experience.

Quotes By Elizabeth Hurley | Quote Of The Day | Top 100 Quotes

See the events in life of Elizabeth Hurley in Chronological Order