(One of the Highest-Paid Actresses in the World in 2020)

Emily Blunt is a British-American actress who is popular for playing seminal roles in films like ‘The Devil Wears Prada,’ ‘The Girl on the Train,’ and ‘Edge of Tomorrow.’ She used to stammer as a kid but overcame her stammering eventually. An intense avidness for acting during her growing up years saw her landing the part of Juliet at the age of 19 in a theatrical adaptation of the legendary Shakespearean tragedy ‘Romeo and Juliet’ in 2002. She debuted professionally by appearing in ‘The Royal Family,’ a drama adapted for the London stage where she starred opposite the celebrated English actress Dame Judi Dench. The ‘Evening Standard’ bestowed her with the ‘Best Newcomer’ award for her portrayal of Gwen Cavendish in the play. After appearing in numerous other stage productions, she got her first major break when she was offered a part in the British TV film ‘Boudica.’ She also got the role of Catherine Howard in ‘Henry VIII,’ a drama movie adapted for television. Soon after, she made her debut on the big screen with the movie ‘My Summer of Love.’ Thereafter, Emily went on to star in numerous movies, TV films, and series for which she has earned several prestigious awards and nominations. British People
British Women
Pisces Actresses
British Actresses
Actresses Who Are In Their 30s
Childhood & Early Life
Emily Olivia Leah Blunt was born on 23 February 1983, in Wandsworth, London, to Oliver Simon Peter Blunt, a barrister and Joanna, a teacher and one-time actress. Emily has three siblings, an older sister named Felicity, a younger brother named Sebastian, and a younger sister named Susannah.
Emily struggled with stammering from the age of eight and her struggle continued for the next seven years. She was advised by a school teacher to take up acting so that she could prevail over her stuttering.
Emily began her schooling at ‘Ibstock Place School’ in Roehampton and thereafter attended ‘Hurtwood House,’ a high school for residential students situated in Dorking, Surrey. She completed a two-year program on performing arts besides excelling in singing, playing cello, and sports.
In August 2000, she got an opportunity to demonstrate her acting skills in the ‘Edinburgh Festival’ where she caught the attention of an actor and agent named Kenneth Mcreddie. Kenneth helped Emily make a mark in London’s theater district, ‘West End,’ and ‘BBC.’ 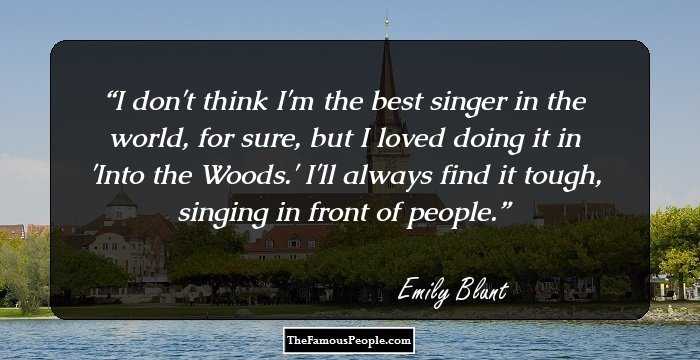 Quotes: Singing
Continue Reading Below
Professional Career: The Initial Years
Kenneth helped Emily Blunt land important roles in numerous period plays, dramas, and TV productions. Emily started her professional career as a theater artist in 2001 when she received an offer to act as the granddaughter (Gwen Cavendish) of Fanny Cavendish (Judi Dench) in the play ‘The Royal Family.’
Emily’s performance in ‘The Royal Family’ was highly appreciated and she was named ‘Best Newcomer’ by the British tabloid ‘The Evening Standard.’
She continued to perform in numerous other ‘West End’ productions, notable amongst them being ‘Vincent in Brixton’ and ‘Romeo and Juliet.’
She made her TV debut in 2003 when she starred as Isolda in the British TV drama film ‘Boudica’ (released as Warrior Queen in the US). In the same year, her portrayal of Catherine Howard in the drama movie ‘Henry VIII’ was highly eulogized.
Emily’s depiction of a character named Tamsin in ‘My Summer of Love,’ a film released in 2004, also received appreciation. The plot of ‘My Summer of Love’ revolves around a romantic relationship between two women hailing from diverse background.
She picked up another ‘Evening Standard’ award under the ‘Most Promising Newcomer’ category in 2004 for her poignant performance in ‘My Summer of Love.’ She shared the award with Natalie Press who starred as Mona in the movie.
She starred opposite noted American actress Susan Sarandon in the movie ‘Irresistible’ in 2005. Emily impressed her fans and critics with her stellar depiction of Mara, a marriage wrecker and sociopath, in ‘Irresistible.’ 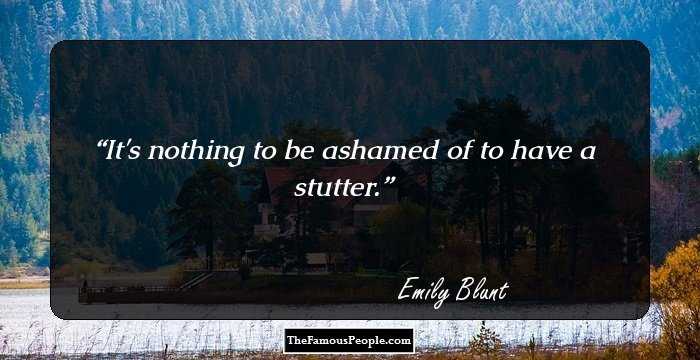 Professional Career: Turning Points
Emily starred as Natasha in the TV film ‘Gideon’s Daughter’ which was directed by Stephen Poliakoff. The film was screened at the 2005 ‘Hamptons International Film Festival’ and was aired for the first time across British TV screens in 2006.
Continue Reading Below
Emily received a ‘Golden Globe Award’ under the category of ‘Best Supporting Actress’ for her immaculate portrayal of Natasha, a distressed single child, in ‘Gideon’s Daughter.’
She appeared in the comedy film ‘The Devil Wears Prada,’ featuring as senior assistant Emily Charlton who reports to the editor-in-chief of ‘Runway’ periodical Miranda Priestly, portrayed by Meryl Streep. Emily’s appearance in this movie, which released in 2006, proved to be momentous as her acting won rave reviews as well as award nominations.
Emily received ‘BAFTA’ and ‘Golden Globe’ award nominations for ‘Best Actress in a Supporting Role’ and ‘Best Supporting Actress’ respectively for her depiction of Emily Charlton in ‘The Devil Wears Prada.’
2007 turned out to be a prolific year for Blunt as she starred in four movies of distinct genres – ‘Wind Chill’ (horror), ‘The Jane Austen Book Club’ (romantic), ‘Charlie Wilson’s War’ (biographical comedy-drama), and ‘Dan in Real Life’ (comedy).
The year 2008 witnessed Emily featuring as Norah Lorkowski in ‘Sunshine Cleaning,’ and as Valerie Brennan in ‘The Great Buck Howard.’ The following year, she played the lead role in an indie drama film titled ‘The Young Victoria,’ which portrayed Queen Victoria’s early life.
Emily was nominated for the ‘Critics’ Choice Movie Award’ and the ‘Golden Globe Award’ for ‘Best Actress’ for her part in ‘The Young Victoria’ in 2009.
2010 also proved to be remarkably significant for Emily Blunt as she starred opposite celebrated Hollywood actors and actresses. She shared screen space with Anthony Hopkins in the horror flick ‘Wolfman’ in which she played an antique dealer named Gwen Conliffe.
2011 was extremely productive for Emily as she appeared in a total of five movies – ‘Gnomeo & Juliet,’ ‘The Adjustment Bureau,’ ‘Salmon Fishing in the Yemen,’ ‘Your Sister’s Sister,’ and ‘The Muppets.’ She earned a ‘Golden Globe Award’ nomination for ‘Best Actress’ for depicting Harriet Chetwode-Talbot, a financial consultant, in ‘Salmon Fishing in Yemen.’
2012 saw Emily play important role opposite Jason Segel in ‘The Five Year Engagement.’ The same year, she also played Charlotte in ‘Arthur Newman,’ which had Colin Firth playing the lead.
Continue Reading Below
2014 began on a promising note for Blunt as she found herself sharing screen space with the likes of Tom Cruise and Meryl Streep. Also, she walked away with a ‘Critics’ Choice Movie Award’ for ‘Best Actress.’
Emily was cast as Rita Vrataski, a warrior assigned with the responsibility of training Tom Cruise’s character in the film ‘Edge of Tomorrow’ which was a huge box-office hit, grossing over $3.7 billion in 2014. She co-starred with Johnny Depp, Anna Kendrick, Meryl Streep, Tracey Ullman, and James Corden in ‘Into the Woods.’
In 2015, Emily played a ‘FBI’ agent in the crime-thriller ‘Sicario’ which starred Josh Brolin and the Puerto Rican actor, Benicio Del Toro. The movie was screened at the ‘Cannes Film Festival’ and was critically acclaimed.
She continued to impress fans and critics alike in 2016 with her performances in films, such as ‘The Huntsman: Winter’s War’ and ‘The Girl on the Train.’
She contributed as a voiceover artist in the 2017 movies, ‘Animal Crackers’ and ‘My Little Pony: The Movie.’ In 2018, she voiced a character named Juliet in ‘Sherlock Gnomes,’ a sequel to the 2011 fantasy romantic comedy film ‘Gnomeo & Juliet.’
In 2018, Blunt shared screen space with her husband John Krasinski in the horror movie ‘A Quiet Place.’ The movie, which premiered at the ‘South by Southwest Film Festival,’ was directed by her husband and received critical acclaim.
The same year, she received praises for playing Mary Poppins in the musical fantasy ‘Mary Poppins Returns’ which served as the sequel to the 1964 movie ‘Mary Poppins,’ which was based on P.L.Travels’ book of the same name. In the 1964 movie, the title role was played by the famous English actress Julie Andrews.
In 2019, Emily was cast to star alongside Dwayne ‘The Rock’ Johnson in the American adventure movie ‘Jungle Cruise.’ The same year, she was also cast to play important roles in movies like ‘The Quiet Place 2’ and ‘Not Fade Away.’
Awards & Achievements
Emily Blunt won the ‘BAFTA Britannia Award’ for ‘British Artist of the Year’ in 2009.
In 2015, she won the ‘Critics’ Choice Movie Award’ for ‘Best Actress in an Action Movie’ for the movie ‘Edge of Tomorrow.’
In 2007, Emily Blunt won the ‘Golden Globe Award’ for ‘Best Supporting Actress – Series, Miniseries or Television Film’ for playing Natasha in the television drama ‘Gideon’s Daughter.’ 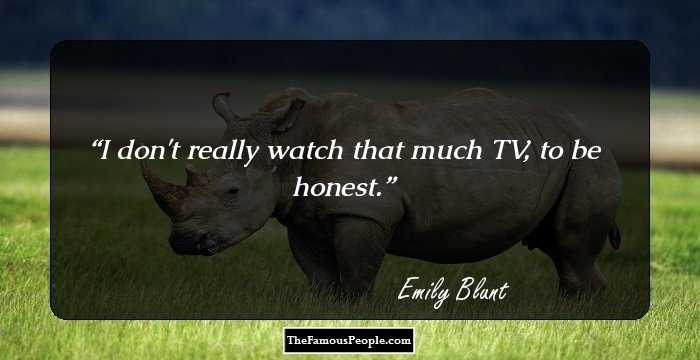 Personal Life
Emily Blunt was in a relationship with Canadian singer Michael Buble from 2005 to 2008.
In 2008, she started dating American actor John Krasinski. They got married on 10 July 2010 in Como, Italy. The couple has two daughters, Hazel (born 2014) and Violet (born 2016).
Trivia
In 2015, Emily Blunt became a naturalized American citizen.

Quotes By Emily Blunt | Quote Of The Day | Top 100 Quotes

See the events in life of Emily Blunt in Chronological Order