Eliza Patricia Dushku is an American actress, model and producer. She made her acting debut in 1992 with the drama film, ‘That Night’, at the age of 10. After the success of her first film, Dushku was cast in several other leading productions by famous and established directors. Her breakthrough, however, came through television. After appearing as a slayer in ‘Buffy the Vampire Slayer’, she became a global phenomenon at a young age. She received widespread recognition for her portrayal of Faith in both the original series and its spinoff, ‘Angel’. Subsequently, she starred in some of the most popular Hollywood movies, such as ‘Bring It On’, ‘Jay and Silent Bob Strike Back’ and ‘The Alphabet Killer’. Dushku also appeared as a leading character in many TV series, including ‘Leap Year’, ‘Tru Calling’ and ‘Doll House’. Apart from performing in front of the camera, she is also known for voice acting, and has voiced for many popular video games and animation series. She was recently seen in the TV series, ‘Bull’ and ‘Banshee’, and now she is playing a leading role in an upcoming series titled, ‘The Black Company’. American People
American Women
Massachusetts Actresses
George Washington University
American Actresses
Childhood & Early life
Eliza Patricia Dushku was born on 30 December 1980 in Watertown, Massachusetts to Judith Ann and Philip Richard George Dushku. Her mother is a reputed political science professor. The family traces its roots to Danish and English heritage. Her father is from Albania.
Dushku has three siblings and grew up in a Mormon religious household, but she decided to disown her church affiliation in her later years. She attended Beaver Country Day School and later graduated from Watertown High School in Massachusetts. 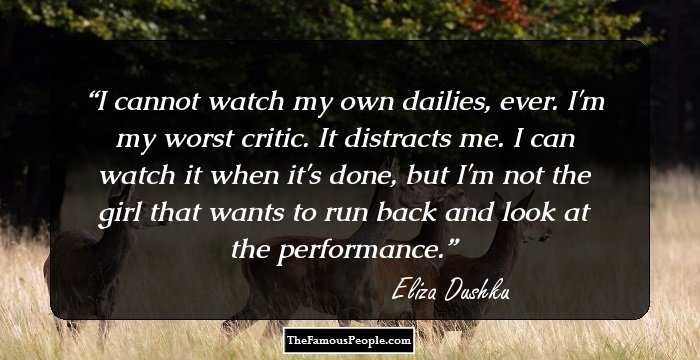 The Hottest Male Celebrities With The Best Abs
Career
Eliza Dushku’s career flourished at a very young age. She was noticed by a casting agent when she was just 10 years old. She was roped in to play the role of Alice in the drama romance ‘That Night’ in 1992. She was selected after a 5-month long search, and the movie helped her achieve initial success.
After her debut, Dushku managed to land several roles, including the character of Pearl in ‘This Boy’s Life’ (1993) alongside Robert De Niro and Leonardo Di Caprio. The drama film was a sleeper hit and Dushku’s strong on-screen presence was appreciated by critics.
In 1994, she appeared in the James Cameron thriller ‘True Lies,’ starring alongside Arnold Schwarzenegger and Jamie Lee Curtis as their teenaged daughter. The movie was a roaring success. She also appeared in the short film ‘Fishing with George’ in the same year.
Over the next few years, Dushku appeared in a few movies, including ‘Journey’ (1995), ‘Bye Bye Love’ (1995) and ‘Race in the Sun’ (1996). She decided to concentrate on her studies after that.
In 1998, despite wanting to continue her studies, Dushku was persuaded by her agent to submit a video audition for an upcoming show. Dushku read the script of ‘Buffy the Vampire Slayer’ and loved it immediately. Her audition was successful, and she was chosen to play the role of Faith.
Dushku was still a minor when the production of ‘Buffy the Vampire Slayer’ started, and her role demanded long working hours. In order to achieve this, Dushku was emancipated after appearing in front of the judge.
Originally slated to run only for five episodes, Dushku’s character in ‘Buffy the Vampire Slayer’ became so popular that it was extended until the fourth season. Dushku remained a part of the series until 2003 while concurrently working on its spinoff, ‘Angel’.
She reprised her role as Faith in ‘Angel’ from 2000 to 2003 and appeared in six episodes. The role earned her more popularity, and she received many fan letters, which overwhelmed her.
While filming for ‘Buffy the Vampire Slayer’ and ‘Angel’, Dushku also appeared in a slew of movies. In 2000, she was seen in the high-school movie ‘Bring it On’ as Miss Pantone, and the movie was an instant hit.
Continue Reading Below
In 2001, she starred in the comedy ‘Jay and Silent Bob Strike Back’ alongside Kevin Smith and Ben Affleck. It was a hit. Later, she was seen with James Franco and Robert de Niro in the film, ‘City by the Sea’ (2002). The mystery was a critical success, and her role as Gina was appreciated as well.
In 2002, Dushku was seen as Danielle in the low-budget comedy, ‘The New Guy’. She also voiced for the ‘Get Your Freak Off’ (2002) episode of the animation series, ‘King of the Hill’.
In 2003, she appeared in many movies, including ‘Wrong Turn’ and ‘The Kiss’. She was roped in to play the leading character of Tru Davies, a medical student, in the supernatural TV series, ‘Tru Calling’. The series ran for two seasons but was not renewed for the third. However, it was popular during its run.
In 2005, she appeared in an episode of ‘That '70s Show’ as Sarah. She also starred in a theatre production titled ‘Dog Sees God’ which ran for almost two months before many members, including Dushku, quit it, citing abuse by the producer.
Over the next few years, she involved herself in diverse projects, including appearing in the music videos, ‘I’m Just a Kid’ and ‘Rockstar’, and voicing for Yumi Sawamura in the video game, ‘Yakuza’. The game was released in 2006 for PlayStation 2.
Her movie ‘Nobel Son’ alongside Alan Rickman and Bill Pullman was released at the Tribeca Film Festival in 2007. She also played the role of Lena Wilson in the indie movie ‘On Broadway’, and her performance was highly appreciated. Other movies included the dark comedy, ‘Sex and Breakfast’ (2007).
In 2008, she was seen in ‘Open Graves’, ‘The Alphabet Killer’, ‘The Coverup’ and ‘Bottle Shock’. While most of these movies tanked at the box office, Dushku’s acting skills were acknowledged.
She started working with Joss Whedon in creating the show, ‘Dollhouse’, which she produced. She played the titular character ‘Echo’, and it was released in 2008. The series ran for two seasons and was popular among her fans.
In 2010, she guest starred in several TV series, including ‘The Big Bang Theory’, ‘Robotomy’ and ‘White Collar’. She also starred in the short film ‘One Shot’ that was released on YouTube in 2011. Towards the end of the year, Dushku filmed the documentary ‘Dear Albania’ (2011) in collaboration with Travel Channel and Lonely Planet.
Continue Reading Below
She voiced the character of Holly Mokri in the motion comedy series ‘Torchwood’ in 2011. Other appearances included her roles in ‘The Guild’, ‘Herd Mentality’ and several short videos.
Dushku is passionate about humanitarian causes and is among the Board of Directors for THRIVEGullu. She was the keynote speaker at the Millennium Campus Network (MCN) and received a Global Generation Award in 2011.
In 2012, she starred as June Pepper, a recurring character, in the TV series, ‘Leap Year’. In the next year, she played her voice-over role as the She Hulk in the Marvel series, ‘Hulk and the Agents of S.M.A.S.H.’.
Dushku mostly worked in TV movies and series in 2015. Her comedy movie ‘Jane Wants a Boyfriend’ was well received; and her role as Veronica Dawson in the series ‘Banshee’ also grew popular. She also guest-starred in the comedy series, ‘Con Man’.
In 2017, she played the recurring role of J.P. Nunnelly in the crime drama ‘Bull’. She also acted in the TV movie, ‘The Saint’. Dushku is currently working on a new TV series titled, ‘The Black Company’, wherein she plays the leading role. It is scheduled to release in the coming months. 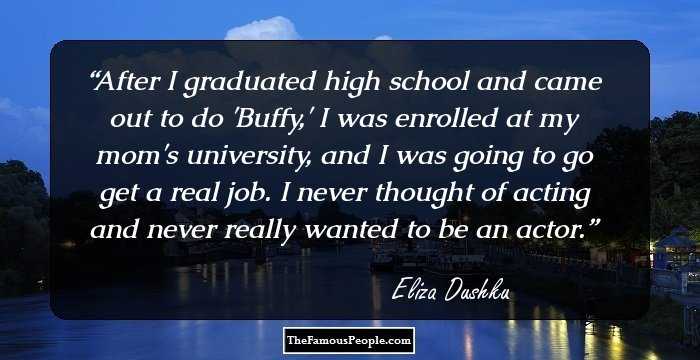 Major Works
Eliza Dushku’s most famous role till date is her portrayal of vampire slayer Faith in the hit series, ‘Buffy the Vampire Slayer’ and ‘Angels’. These roles launched her career in Hollywood and convinced critics of her skills and talent. She was nominated for several awards as well.
Family & Personal Life
Eliza Dushku started dating basketball player Rick Fox in October 2009. They moved in together in August 2010. They later announced that they had split as of June 2014.
She is currently married to Peter Palandjian, a CEO of a Boston real-estate company. They got married on 18 August 2018.
In an homage to her father’s lineage, Dushku’ decided to become an honorary citizen of Tirana and was even given the title of Tirana Ambassador of Culture and Tourism by the Mayor Lulzim Basha. 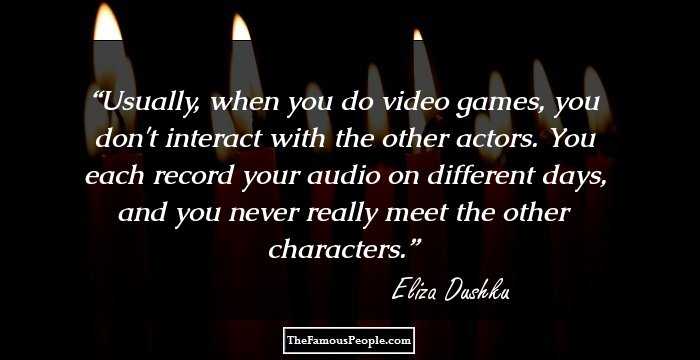 Quotes: You, Never
Trivia
Eliza Dushku is named after Eliza R. Snow, a historian and poet from the 19th century who extensively wrote about religion.

Quotes By Eliza Dushku | Quote Of The Day | Top 100 Quotes

See the events in life of Eliza Dushku in Chronological Order