(American Actress Known for Her Films: 'Closer', 'Black Swan' and as 'Jane Foster' in 'Thor' Movies)

Golden Globe and Academy Award winning actress, Natalie Portman has proved to be one of the most versatile and talented actresses in the entertainment industry. This Israeli born, American actress has appeared in some of the most successful and critically acclaimed films. She gained recognition after she starred in the ‘Star Wars’ series of films. With a degree in psychology from Harvard, Natalie Portman along with her acting career, served as a guest lecturer in Columbia University on terrorism and counter-terrorism. She has also pursued graduate courses at the Hebrew University of Jerusalem and is well versed in Arabic, German, Japanese and French. She served as the youngest member of the 61st Annual Cannes Film Festival jury. Named one of the ‘50 Most Beautiful People’ by People’s Magazine, Portman is known for her trademark brown eyes, sweet voice and petite figure. Some of her well known films include, ‘Star Wars Episode I: The Phantom Menace’, ‘Star Wars Episode II: Attack of the Clones’, ‘Star Wars Episode III: Revenge of the Sith’, ‘V for Vendetta’, ‘Black Swan’ and ‘No Strings Attached’. Lindsay Lohan
9th June In History
DID WE MISS SOMEONE?
CLICK HERE AND TELL US
WE'LL MAKE SURE
THEY'RE HERE A.S.A.P
Quick Facts

American People
American Women
Harvard University
Gemini Actresses
American Actresses
Childhood & Early Life
Natalie Portman was born on June 9, 1981 as Natalie Hershlag in Jerusalem, Israel to Avner Hershlag, Israeli fertility specialist and gynaecologist and Shelley Stevens, a homemaker.
In 1984, when she was three, her parents immigrated to the United States from Israel. Her father came as a medical trainee and they stayed in Washington, D.C. They later moved to Connecticut and then Jericho, New York.
She attended the Charles E. Smith Jewish Day School, Washington, D.C. and later the Solomon Schechter Day School in Glen Cove, New York. In 1999, she graduated from the Syosset High School in Syosset, Long Island.
Since she turned four, she started learning dance and performed in various local troops. She also attended many theatre camps during her childhood days.
She attended the American Theatre Dance Workshop in New Hyde Park, New York, where she trained in ballet and modern dance. She also went to the Usdan Center for the Creative and Performing Arts in Wheatley Heights.
While she was working as an actress, she attended Harvard College, from where she graduated in 2003 with an A.B. degree in psychology. Following year, she attended the Hebrew University of Jerusalem for graduate courses.
In March 2006, she served as a guest lecturer on terrorism and counterterrorism at Columbia University. She has co-authored two research papers and is proficient in Arabic, German, Japanese and French. 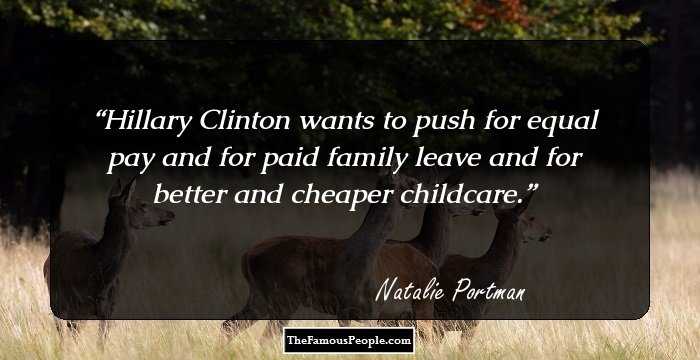 Continue Reading Below
Career
On November, 18, 1994, she made her film debut with ‘Léon: The Professional’, a thriller directed by Luc Besson. After she signed the film, in order to protect her family identity, she took her grandmother’s maiden name ‘Portman’.
In 1995, she played ‘Lauren Gustafson’ in the Michael Mann crime film, ‘Heat’. The film was a commercial success and also earned good reviews from critics.
In 1996, she appeared as ‘Marty’ in the film, ‘Beautiful Girls’. The same year, she was seen in the Woody Allen film ‘Everyone Says I Love You’ and the film, ‘Mars Attacks!’ directed by Tim Burton .
In 1997, she played the role of ‘Anne Frank’ in the stage paly, ‘The Diary of Anne Frank’, which was an adaptation of the book of the same name. The play opened at the Music Box Theatre, Manhattan.
In May 1999, she starred in the epic space opera film titled, ‘Star Wars Episode I: The Phantom Menace’. The film was a massive commercial success but received mixed reviews from the critics.
In November 1999, she starred in the American comedy film, ‘Anywhere but Here’, which was directed by Wayne Wang. The film was based on a novel of the same name.
In 2000, she played the role of ‘Novalee Nation’, a seventeen year old pregnant girl, who is abandoned by her boyfriend in the film, ‘Where the Heart Is’. The film was the directorial debut of Matt Williams.
In 2001, she played ‘Nina’ in the play, ‘The Seagull’, which opened at Central Park as a part of the New York Shakespeare Festival. The play also starred Meryl Streep.
In 2002, she reprised her role in the sequel of the ‘Star Wars’ movie, ‘Star Wars Episode II: Attack of The Clones’. Film critics reviewed the film positively.
Continue Reading Below
In 2003, she played herself on the ‘Oscar Needs a Change of Scenery’ episode of the American children’s TV series, ‘Sesame Street’. The same year, she appeared in the hit film, ‘Cold Mountain’.
In 2004, she starred in the comedy drama film, ‘Garden State’ and that year she also played the role of ‘Alice Ayres’ in the film, ‘Closer’. The very same year, she played herself on the TV series, ‘Sesame Street’.
In 2005, she starred in the film, ‘Star Wars Episode III: Revenge of the Sith’ and the film, ‘Free Zone’. The following year, she hosted an episode of show ‘Saturday Night Live’ and narrated the documentary film, ‘The Armenian Genocide’.
In 2006, she starred in the Spanish American film, ‘Goya’s Ghosts’ opposite Javier Bardem and Stellan Skarsgård. That year she also starred in ‘V for Vendetta’ and ‘Paris, je t’aime’.
In 2007, she starred in the comedy film, ‘The Darjeeling Limited’, the Wong Kar-wai film ‘My Blueberry Nights’ and other films such as ‘Hotel Chevalier’ and ‘Mr. Magorium’s Wonder Emporium’.
In 2007, she played a voice role in the ‘Little Big Girl’ episode of the animated sitcom, ‘The Simpsons’. The following year, she played, ‘Anne Boleyn’ in the drama film, ‘The Other Boleyn Girl’.
In 2008, she made her directorial debut with the short film titled, ‘Eve’. The film premiered at the 65th Venice International Film Festival, which was held in Venice, Italy.
In 2009, she appeared in the anthology series of short films, ‘New York, I Love You’, in which she also directed a segment. That year, she was seen in the films, ‘The Other Woman’ and ‘Brothers’.
In 2010, she delivered an Academy Award winning performance in the Darren Aronofsky film, ‘Black Swan’. That year she was seen in the film, ‘Hesher’, in which she was also a producer.
Continue Reading Below
In 2011, she starred in the romantic comedy film, ‘No Strings Attached’, played the role of ‘Isabel’ in the film ‘Your Highness’ and also appeared in the film, ‘Thor’. The next year, she played a voice role in the ‘Moonshine River’ episode of the animated sitcom, ‘The Simpsons’.
She appeared in the American superhero film ‘Thor, The Dark World’ in 2013. 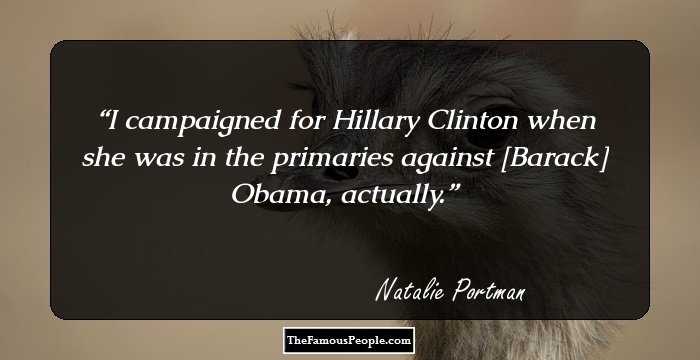 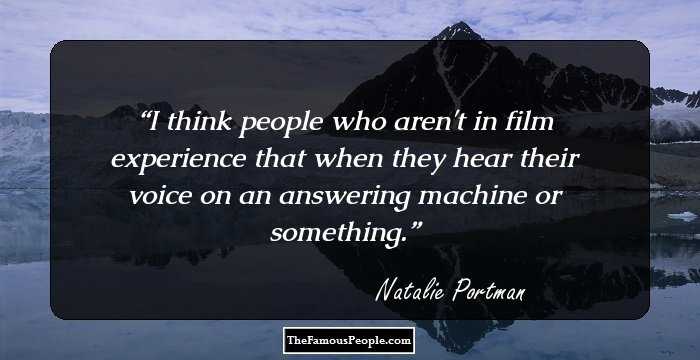 Personal Life & Legacy
She was romantically involved with Devendra Banhart, an American folk singer. Their relationship ended in 2008.
She is an advocate for animal rights, does not wear fur and turned a vegan. However, she discontinued her vegan diet during her pregnancy as she craved for eggs and cheese. She resumed the diet after delivery.
She is the Ambassador of Hope for FINCA International, which encourages women entrepreneurs in developing countries by providing financial aid. She has worked on various anti-poverty causes.
She supports the Democratic Party and in 2004, she supported Democratic nominee, Senator John Kerry.
In 2008, she supported Senator Hillary Clinton. She later supported Senator Barack Obama of Illinois.
On August 4, 2012, she married her boyfriend, ballet dancer Benjamin Millepied, whom she began dating while shooting for ‘Black Swan’. He was the choreographer for the film. They have a child together.
Trivia
This Golden Globe and Academy Award winning actress would often cry off-stage during the Broadway play, ‘The Diary of Anne Frank’, in which she played ‘Anne’. She cried because she had personal connections with the events in the diary and lost her grandparents in the holocaust.

Quotes By Natalie Portman | Quote Of The Day | Top 100 Quotes

See the events in life of Natalie Portman in Chronological Order