Charles I of England Biography

Advanced Search
Charles I of England was the king of England, Scotland, and Ireland from 1625 to 1649. He was an authoritarian who believed in the divine right of kings, and desired to govern his territories according to his own rules and regulations. He had no regard for the views and opinions of his subjects who began to loathe him for his autocracy and dictatorship. He was also a very religious man who supported high church ecclesiastics and thus earned the mistrust of reformed groups, such as the Puritans and Calvinists. Charles was born as the second son of King James VI of Scotland. Since he had an elder brother, it was not expected that he would inherit the throne after his father. However, the unfortunate and untimely death of his elder brother meant that Charles became the heir apparent to succeed his father. Charles I was unpopular from the very beginning; he quarreled with the Parliament of England over several issues from the time of his succession. He made several attempts to dissolve the parliament and rule alone which further added to his unpopularity. His continued animosity with the parliament led to the ‘English Civil War’ and his eventual execution. He was beheaded on January 1649. Also Known As: Charles I

father: James VI and I, James VI of Scotland and I of England

British People
British Emperors & Kings
British Historical Personalities
Scorpio Men
Childhood & Early Life
Charles was born on 19 November 1600, in Dunfermline, Scotland,to King James VI of Scotland and Anne of Denmark. He was created Duke of Albany, the traditional title of the second son of the king of Scotland, on 23 December 1600.
His father became the king of England on March 1603. His parents and older siblings left for England, leaving behind Charles, a sickly child, as they feared he might not survive the journey.
Charles left for England in mid-1604 when he was considered to be strong enough for the journey. He would spend most of his life in England. In addition to being a weak child, he also developed a speech impediment.
In 1605, he was created Duke of York and made a Knight of the Bath.
He received his early education from Thomas Murray who taught him classics, languages, mathematics, and religion.
As he grew up, Charles overcame some of his physical infirmities and became an adept horseman and marksman. He also loved hunting and fencing.
His elder brother Henry, who was the heir apparent and much more popular among the subjects, died of an illness at the age of 18 in 1612. Charles, aged 12 at the time, became the heir apparent. He automatically gained several titles, including Duke of Cornwall and Duke of Rothesay due to his newly gained status as the eldest surviving son of the sovereign.
Charles was created Prince of Wales and Earl of Chester on November 1616. 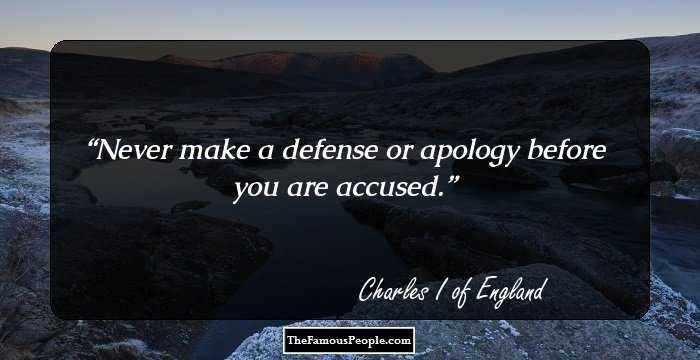 Quotes: You, Never
Continue Reading Below
Accession & Reign
King James started suffering from ill health in 1624 and was growing progressively weaker. He became so ill that he struggled to control the Parliament properly. Eventually, Charles, being the heir apparent, began taking up more responsibility in the governance.
The king died on March 1625 and Charles became the king. At the time of his succession, he had a close friendship with George Villiers, Duke of Buckingham, who was a notorious figure in the English court.
Charles I proved to be an unpopular ruler from the very beginning. The initial years of his reign were marked by political turbulence and conflicts with the parliament. He engaged in wars with France and Spain and this kindled a general dislike for him among his citizens.
He was an authoritarian who believed in the absolute power of the monarch. He dissolved the parliament three times between 1625 and 1629. After dismissing the parliament in 1629, he resolved to rule alone. As a result, he had to raise revenue by non-parliamentary means which added to his notoriety.
Over the 1630s, he primarily raised revenue from measures, such as impositions, forced loans, wardship, ship money, and exploitation of forest laws. However, he became involved in a war against Scotland in 1639 and the need for extensive funding forced him to summon a parliament in 1640.
The Irish uprising on October 1641 strained the relations between the king and the parliament, leading to political tensions. Charles tried to get five members of the parliament arrested, and the escalating tensions culminated in the ‘English Civil War’ in 1642. The war was fought between supporters of King Charles I and the supporters of the parliament.
The first ‘English Civil War’ took place from 1642 to 1646, while the second war took place from 1648 to 1649. The king’s supporters were defeated in both the wars. After the conclusion of the second civil war, the king was put on trial for treason, marking the downfall of Charles I of England.
Personal Life & Legacy
Charles I married French Princess Henrietta Maria in 1625. The initial years of their marriage were fraught with quarrels and disagreements. However, their relationship improved over time. Eventually, the couple formed a strong bond and had a happy married life. This marriage produced nine children.
Following the second ‘English Civil War,’ Charles I was charged with high treason and “other high crimes against the realm of England.” He was put on trial, declared guilty, and sentenced to death. He was beheaded on 30 January 1649 outside the ‘Banqueting House’ in Whitehall, London.