Edward St. John Gorey was a famous American writer and illustrator. He was famous, particularly in the gothic subculture, for his unconventional dark humored storylines and beautiful illustrations with the designs and ideas set in Victorian and Edwardian era. Throughout his lifetime, Gorey published more than 100 independent works and illustrated more than 50 works by other authors, including Samuel Beckett, Edward Lear, John Bellairs, Charles Dickens, T. S. Eliot, etc. He was very fond of anagrams and published most of his work under different pseudonyms that usually were anagrams of his own name, like, Ogdred Weary, Eduard Blutig, D. Awdrey-Gore, etc. He also wrote and directed theatrical works like Broadway production of ‘Dracula’, Le Theatricule Stoique’s acts and worked on PBS's Mystery series, among other things. The house that he spent most of his life in, Cape Cod house is called ‘Elephant House’ and is the theme of a photography book, ‘Elephant House: Or, the Home of Edward Gorey’, with photographs and text by Kevin McDermott and is now the ‘Edward Gorey House Museum’. Gorey never married or had any family, which is probably why he left the bulk of his estate to a charitable trust benefiting cats and dogs, as well as other species, including bats and insects. American Celebrities
Novelists
Cartoonists
Short Story Writers
American Men
Childhood & Early Life
Gorey was born in Chicago to Helen and Edward Gorey. His parents got divorced when he was 11. His father married many times after that and one of his stepmothers was Corinna Mura, a cabaret singer.
After attending many local grade schools, Gorey got enrolled in the Francis W. Parker School. After finishing school, he served in the army in Utah from 1944 to 1946. He then attended Harvard University, where he studied French.
He founded the Poets' Theatre in Cambridge in the early ‘50s with fellow Harvard alumni like, Alison Lurie, John Ashbery, Donald Hall and poet Frank O’Hara. The group was supported by the faculty members John Ciardi and Thornton Wilder. 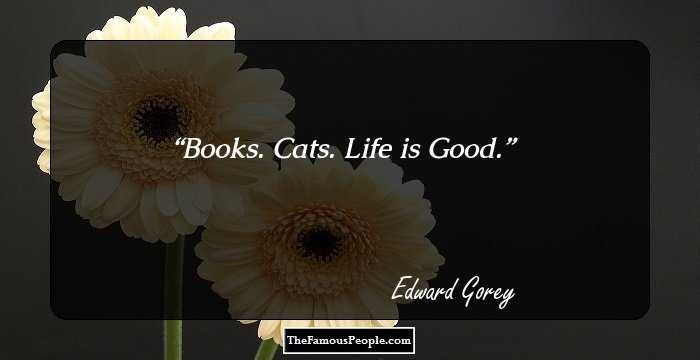 Quotes: Life, Books
Continue Reading Below
Career
In 1953, Gorey shifted to New York and started working as an illustrator for the book-publishing company, Doubleday Anchor, where he worked for the next eight years. Around the same time, Gorey published first independent work, ‘The Unstrung Harp’.
At Doubleday Anchor, Gorey illustrated works as miscellaneous as ‘Dracula’ by Bram Stoker, ‘The War of the Worlds’ by H. G. Wells, ‘Old Possum's Book of Practical Cats’ by T. S. Eliot, many children's books by John Bellairs, etc.
After ‘Unstrung Hrap’s’ success, Gorey started to gain local popularity with his subsequent works like, ‘The Doubtful Guest (1957)’, ‘The Hapless Child (1961)’, ‘The Gashlycrumb Tinies: The Gilded Bat (1966)’, ‘The Deranged Cousins: or, Whatever (!969)’, etc.
His book-illustration acclaim from this phase includes two books by Edward Lear, (‘The Dong with a Luminous Nose’), as well as the works of H.G. Wells, T.S. Eliot Samuel Beckett, John Updike, Charles Dickens, Lewis Carroll, Virginia Woolf, etc.
He started to gain cult following because of his gothic style writing and illustrations, dark humored stories and Victorian styled settings..
He released anthologies ‘Amphigorey (1972)’ and ‘Amphigorey Too (1975)’—which inspired the 1978 musical stage adaptation, ‘Gorey Stories—and ‘Amphigorey Also (1983)’, during this time.
He made gothic and his typical eerie designs for the 1977 Broadway production of Dracula, for which he won a Tony Award for Best Costume Design. He was also nominated for Best Scenic Design.
Gorey introduced animation to PBS’ famous series ‘Mystery!’—a show that had brought a large number of detective series and television movies from all over the world to be aired on American television—in 1980.
He wrote and directed theatre featuring his papier-m�ch� puppets, known as Le Theatricule Stoique. The first of these productions, ‘Lost Shoelaces’, was showcased in Massachusetts in 1987 and the last was ‘The White Canoe: an Opera Seria for Hand Puppets’.
Continue Reading Below 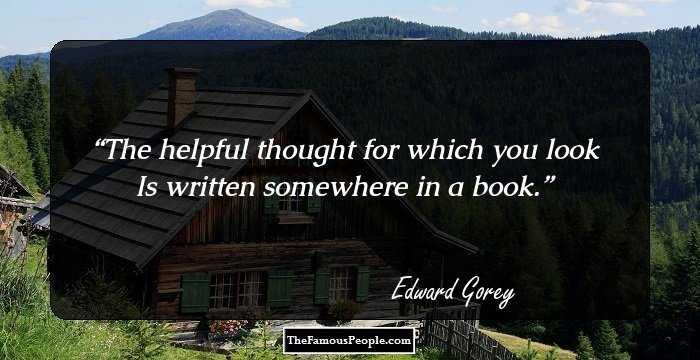 Quotes: You
Major Works
Gorey is an iconic figure in the gothic culture because of his various writing and illustrations like: ‘The Unstrung Harp (1953), ‘The Curious Sofa (1961)’, ‘The Iron Tonic: Or, A Winter Afternoon in Lonely Valley (1969)’, ‘The Dwindling Party (1982)’, etc.
Personal Life & Legacy
Gorey never married and never specified any romantic relationship in the press. He was sometimes called gay but he maintained that he was neither gay nor straight.
He died on April 15, 2000, at Cape Cod Hospital in Hyannis, Massachusetts. 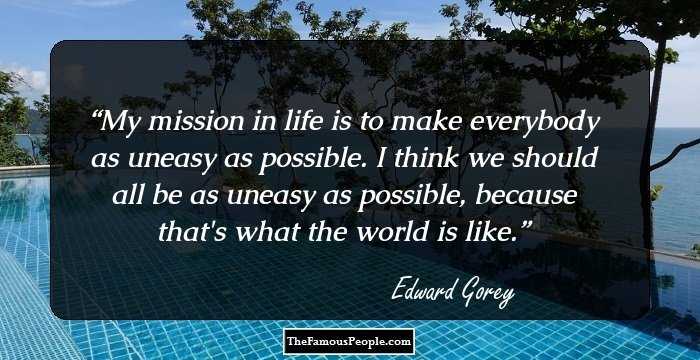 Quotes: Life, Think, Like, I
Trivia
Gorey was a recluse and was known for his love for ballet, fur coats, tennis shoes, and his many cats.
He served as a judge at Yarmouth art shows and enjoyed activities at the local cable station, studying computer art and serving as cameraman on many Yarmouth shows.
His Cape Cod house is called ‘Elephant House’ and is the theme of a photography book, ‘Elephant House: Or, the Home of Edward Gorey’, with photographs and text by Kevin McDermott. The house is now the ‘Edward Gorey House Museum’.
This writer and artist left a lot of his estate to a charitable trust profiting cats and dogs, as well as other species, including bats and insects.
He wrote an unproduced screenplay for a silent film, ‘The Black Doll’.
His favorite writers were: Jane Austen, Agatha Christie, Francis Bacon, George Balanchine, Balthus, Louis Feuillade, Ronald Firbank, Lady Murasaki Shikibu, Robert Musil, Yasujiro Ozu, Anthony Trollope, and Johannes Vermeer.
His favorite television programs were: ‘Petticoat Junction’, ‘Cheers’, ‘Buffy the Vampire Slayer’, ‘Batman: The Animated Series’ and ‘The X-Files’.
He wrote regular movie reviews for the Soho Weekly under the pseudonym ‘Wardore Edgy’.
He wrote many of his books under pseudonyms that usually were anagrams of his own name, like: Ogdred Weary, Mrs. Regera Dowdy, Eduard Blutig, Raddory Gewe, Dogear Wryde, Edward Pig, Wardore Edgy, Madame Groeda Weyrd, Dewda Yorger, etc.
Gorey merchandises are popular at malls around the United States, like stuffed dolls, cups, stickers, posters, and other items.
Although his books were popular with children but he did not associate with children much, neither was he very fond of them.
Recommended Lists:
Short Story Writers #94
Writers #1145
Media Personalities #473

Quotes By Edward Gorey | Quote Of The Day | Top 100 Quotes

See the events in life of Edward Gorey in Chronological Order