The first ever Attorney General of Missouri after it became a state, Edward Bates was a U.S. lawyer and politician who played a very important role during the Lincoln administration. With his serious and solemn appearance Bates was someone who was dedicated to his job and outspoken in expressing his views and opinions. A socially conscious man, he was against the practice of slavery which was rampant during his time. As most white families of that era, his family too owned black slaves whom he freed as he felt it was an inhumane practice to keep slaves. He received good education as a child and studied law as a young man. He was very ambitious with a keen interest in politics and was elected to the house of the representatives. At one time he was even nominated to become the presidential candidate of the Republican Party though he soon realized that he could not possibly win. Undaunted, he went on to support Abraham Lincoln who ultimately did become the President. Bates was made the Attorney General under Lincoln. The lawyer was a man of courage and would openly voice his dissent if he did not agree with the president on any issue. Along with being a successful lawyer, he was also a dedicated family man with several children. Jimmy Carter
Miscellaneous #6354
Lawyers & Judges #959
4th September In History
DID WE MISS SOMEONE?
CLICK HERE AND TELL US
WE'LL MAKE SURE
THEY'RE HERE A.S.A.P
Quick Facts

American People
Virgo Men
Childhood & Early Life
He was born as the twelfth child of Thomas and Caroline Bates in Goochland County, Virginia. Both of his parents were Quakers.
His father died when he was a young boy but fortunately he had several elder siblings who took good care of him. He was sent to Charlotte Academy, of St. Mary's County in 1806.
He served in the army during the War of 1812 though his mother did not approve of her son taking up arms. So he decided to study law as advised by his brother who was an attorney.
He moved to St. Louis and studied law with Rufus Easton who was the Judge of the Louisiana Territory and was admitted to the Bar during the winter of 1816-17. 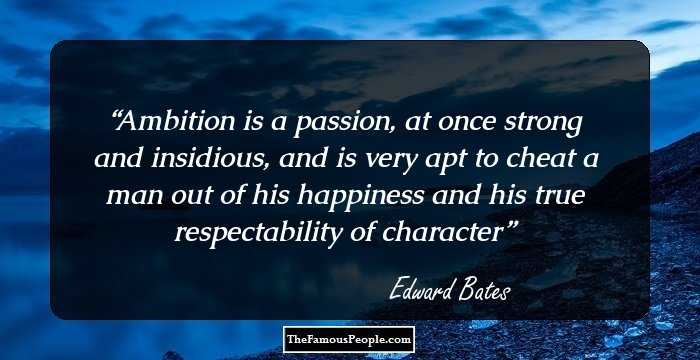 Quotes: Character, Happiness
Continue Reading Below
You May Like

Who Is The Most Popular BTS Member?
Career
Bates joined Easton as a partner upon his admission to the bar. The partners organized the James Ferry in 1817 which ran from St. Charles to Alton.
He also began practicing privately and entered politics in 1820 when he was elected as a member of Missouri’s constitutional convention. The same year he also became Missouri’s Attorney General.
He was elected to the Missouri House of Representatives in 1822 where he served till 1824. His political aspirations were growing by the day and he was delighted when he was elected to the United States House of Representatives in 1827 for one term.
His political career flourished over the 1830s. In 1831, he was elected to the State Senate where he remained till 1835 before joining the Missouri House from 1835.
During the 1840s he became a prominent member of the Whig Party. His political philosophy was very similar to that of Henry Clay.
At this time Bates was a slaveholder but he was highly influenced by the case of Polly Berry, a freed slave who enlisted his support to free her daughter who was still illegally retained by her so-called owners.
During the Whig National Convention in 1852, he was considered for nomination as vice-president but lost to William Graham. The Whig Party broke up in the 1850s.
Bates became a Republican and was considered a candidate for the presidential nomination in 1860. However when he realized that he might not win, he began supporting another candidate, Abraham Lincoln who eventually became the president.
Lincoln on becoming the president appointed Bates as the United States Attorney General in 1861. He served in this post till 1864. He played an important role in carrying out Lincoln’s earlier war policies. He supported the president in the arbitrary arrest of southern sympathizers and rebellious northerners.
However, Bates did not always support Lincoln’s policies and was vocal in voicing his dissent. As the president began proposing more radical policies, Bates’ position suffered.
Even though he himself had freed his slaves, he did not believe in the president’s Emancipation Proclamation that would free black slaves in several states. Nor was Bates in support of the recruitment of blacks into the Union Army.
His dissatisfaction with the Lincoln government reached a new high when the president nominated Salmon Chase to be Chief Justice in 1864, a post which Bates wanted. Thus Bates resigned.
After his resignation he protested against the adoption of the Missouri constitution of 1865 and wrote several essays arguing against the constitution. But the constitution was ultimately ratified and he resigned from active politics.
Major Works
Edward Bates was a brilliant lawyer who served as the United States Attorney General under President Abraham Lincoln from 1861 to 1864. He played a key role in carrying out the president’s war policies and was very vocal in voicing his opinions even if they were different from the president’s.
Personal Life & Legacy
He married Julia Coalter, the daughter of David Coalter, in 1823. The couple had 17 children and Bates took pride in his large family. He was a loving husband and father—a devoted family man.
He died in 1869.
You May Like

See the events in life of Edward Bates in Chronological Order