Don Cheadle is an American actor, producer, director, and writer best known for his performance in the movies ‘Crash,’ ‘Hotel Rwanda’ and ‘Iron Man 2.’ He made his debut in the comedy film ‘Moving Violations’ closely followed by the war movie ‘Hamburger Hill.’ He first received recognition for his performance as Mouse Alexander in the movie ‘Devil in a Blue Dress’ for which he was awarded the Best Supporting Actor by the Los Angeles Film Critics Association. He co-produced as well as acted in the Oscar-winning Best Picture ‘Crash’ and portrayed Paul Rusesabagina in the movie ‘Hotel Rwanda’ which earned him a nomination for the Academy Award for Best Actor. Besides acting, he has worked with the United Nations to address concerns on climate change and the genocide in Darfur and Rwanda. He has co-authored the book ‘Not on Our Watch: The Mission to End Genocide in Darfur and Beyond’ with activist John Prendergast and has co-founded the ‘Not On Our Watch Project’ that focuses global attention in order to prevent mass atrocities on humanity. Cheadle is married to actress, Bridgid Coulter and has two children, with whom he lives in Santa Monica, California. He is one of Hollywood’s respected entertainment personalities who has supported the cause of protecting humanity from atrocities of the worst kind. education: California Institute for the Arts

He was born as Donald Frank Cheadle Jr on November 29, 1964, in Kansas City, Missouri, US to Bettye and Donald Frank Cheadle Sr. His mother was a teacher and his father was a clinical psychologist. He has two siblings named Cindy and Colin. He was fond of music and was a member of his school choir from a young age. He travelled a lot with his family during his initial days.

He studied in Hartley Elementary School in Lincoln, Nebraska from 1970 to 1974 and completed his graduation from East High School, Denver, Colorado in 1982. During his high school days, he took an active part in dramatics and performed in several plays. He also learnt to play the saxophone and was a member of a jazz band.
He went on to do a Bachelor’s Degree in Fine Arts from the California Institute of Arts. While he was in college he attended a number of auditions and landed with a recurring role in the television serial ‘Fame.’ 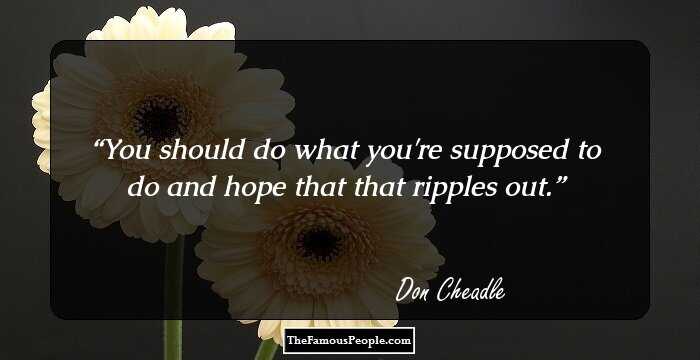 The Best Black Actresses Of All Time
Career
He made his debut on the big screen in the comedy film ‘Moving Violations’ in 1985. This was followed by his appearance in the war movie ‘Hamburger Hill in 1987. He then changed track to television and appeared in the April 1988 episode of the comedy serial ‘Night Court.’

He acted in a number of movies in the late 80’s and early 90’s like ‘LA Law’ and ‘Hill Street Blues’ but first received wide spread acclaim when he was awarded the Best Supporting Actor by the Los Angeles Film Critics Association for his performance as Mouse Alexander opposite Denzel Washington in the movie ‘Devil in a Blue Dress’ in 1995. The movie explored the heart of the black community in Los Angeles in the 1940’s.

He soon gained popularity and appeared as well as co-produced the Oscar-winning Best Picture titled ‘Crash’ in 2004. His portrayal of Paul Rusesabagina in the movie ‘Hotel Rwanda’ earned him a nomination for the Academy Award for Best Actor the same year that boosted his ratings.

He started taking on more diverse roles and appeared in the criminal drama ‘Traffic,’ followed by a comedy role in ‘The Family Man’ and a more serious role in the hospital drama ‘ER’ that ran from 1994 to 2009. His television appearances include ‘’The Rat Pack,’ ‘Things Behind The Sun’ and ‘A Lesson Before Dying.’ His performance in the serial “House of Lies’ won him a Golden Globe Award for Best Actor in a Comedy Series.

He had a minor role in the film ‘Ocean’s Eleven’ which was appreciated and landed him with the role of the same character in the sequels ‘Ocean’s Twelve’ and ‘Ocean’s Thirteen,’ with much more screen time. He also starred in the sequels ‘Iron Man 2’ and ‘Iron Man 3’ portraying the role of James Rhodes, played by Terrence Howard in the initial film.

He wrote and produced the film ‘Miles Ahead’ based on the life of Miles Davis, which was released in 2016. He reprised the character of Colonel James Rhodes in the films ‘Avengers: Age of Ultron,’ ‘Captain America: Civil War’ and ‘Avengers: Infinity War’ recently. 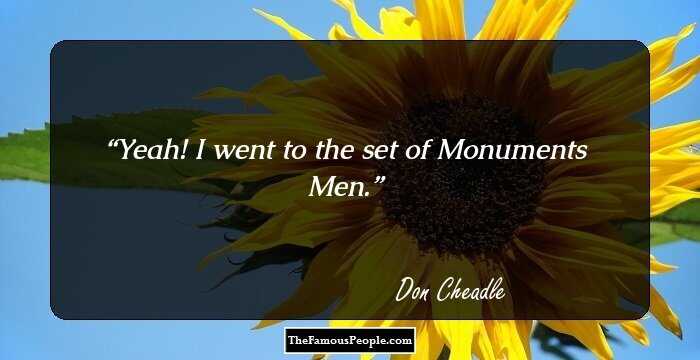 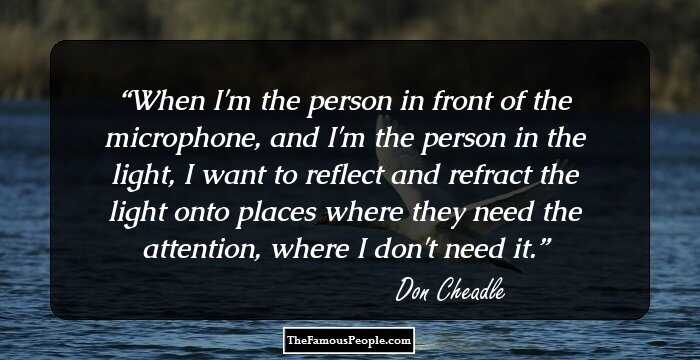 Cheadle married actress, Bridgid Coulter, after a long-term relationship and has two children, Ayana and Imani, with whom he lives in Santa Monica, California. He was featured on the PBS series ‘African American Lives 2,’ on which his DNA revealed Cameroonian origin.

Besides acting, he has worked with the United Nations to address concerns on climate change and the genocide in Darfur and Rwanda. His contributions to the cause have been recognised by the BET Humanitarian award and the Peace Award by the Nobel Peace Prize Laureates in Rome. He is also a member of the Advisory Board on Citizens Climate Lobby where he has been actively involved and has been named as a goodwill ambassador for the United Nations Environmental Program of 2010.

He is a founding member of the Ante Up for Africa poker tournament that has raised more than $ 3 million for the victims of violence in Darfur and Rwanda.
Trivia
Cheadle and activist John Prendergast have co-authored the book ‘Not on Our Watch: The Mission to End Genocide in Darfur and Beyond’ that became a bestseller. He also co-founded the ‘Not On Our Watch Project’ that is an organisation that focuses global attention in order to prevent mass atrocities on humanity.
He appeared in commercials promoting the Super Bowl of the National Football League of American professional football from 2002 to 2005.
He starred with comedian Adam Sandler in the comedy drama ‘Reign Over Me’ in 2007, which proved to be a box office flop.
His second book, ‘The Enough Moment: Fighting to the End Africa’s Worst Human Rights Crimes’ was co-written with Prendergast and released in 2010.

Quotes By Don Cheadle | Quote Of The Day | Top 100 Quotes

See the events in life of Don Cheadle in Chronological Order