Demi Lovato is one of the few artists who have managed to earn a great reputation in the movie industry as well as the music world at a really young age. From being a mere starlet in a few ‘Disney’ productions to becoming one of the most celebrated singers and actresses of today, Lovato has travelled a long way. Apart from garnering acclaim for her roles in movies such as ‘Camp Rock’, Demi has proved her prowess as a singer through albums such as ‘Unbroken’, ‘Don’t Forget’, and ‘Here We Go Again’. Many of her songs have turned out be chartbusters and grabbed top positions in musical charts like the ‘Billboard 200’ and are even popular in nations like New Zealand and Syria, apart from just the United States. The actress attributes the success of her musical endeavours to contemporary pop icons like Britney Spears, Kelly Clarkson and Christina Aguilera, who influenced her through their styles of music. Without merely concentrating on her career and personal growth, this celebrity is known for associating herself with charitable organizations, such as ‘PACER’ which works towards the rights of children who are victims of bullying Humanitarian Work: Artist associated with organizations such as PACER and Free the Children

American People
Musicians
Pop Singers
Pop Rock Singers
Lyricists & Songwriters
Childhood & Early Life
Demi Lovato was born to Patrick Martin Lovato and Dianna Lee Hart on August 20, 1992, in Albuquerque city, New Mexico. While her mother was a cheerleader of the American football team ‘Dallas Cowboys’, her father worked as an engineer and a musician.
Lovato was inclined toward art since a young age, and started learning to play the piano when she was hardly seven. The young girl then experimented with the guitar at the age of 10 and even took lessons in singing as well as dancing during the same period.
Soon after, she got the opportunity to play the role of Angela in the popular television series aimed at children, named ‘Barney and Friends’. 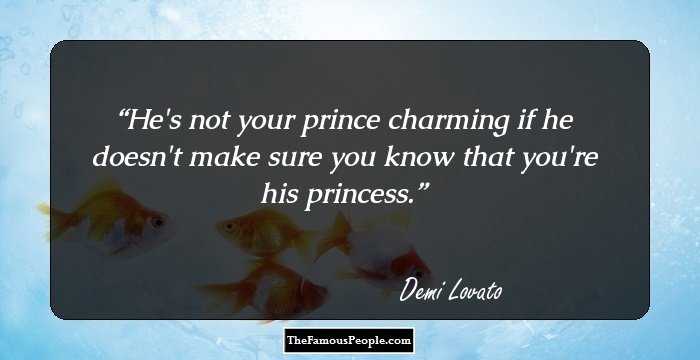 Rhythm & Blues Singers
American Women
New Mexico Actresses
New Mexico Musicians
Career
During the year 2006, Lovato made a guest appearance in the acclaimed television series ‘Prison Break’ and followed it up with a cameo in the television series ‘Just Jordan’.
2007 was one of the eventful years of Demi’s career, since it was during this time that she grabbed one of the meatiest roles of her career. The actress was cast for the lead character Charlotte Adams in the first season of the American television series ‘As The Bell Rings’, which was aired on the ‘Disney Channel’.
The same year, she attended the auditions for two projects of the ‘Disney Channel’, a sitcom named ‘Sonny With A Chance’ as well as ‘Camp Rock’ and she was selected for both of these projects. The premiere of ‘Camp Rock’ was held in June 2008 and was well-acclaimed by the million viewers.
Demi then ventured into singing and composed her album titled ‘Don’t Forget’. This collection garnered both critical and commercial success. Approximately 89,000 copies of the album were sold in the very first week of its release and 500,000 copies in total.
The success of the song ‘Here We Go Again’ from this album encouraged this celebrity to embark on a musical tour in 2009, in a bid to cover 40 cities.
Lovato returned to the screen in 2010 through the sequel of her earlier film ‘Camp Rock’, titled ‘Camp Rock 2: The Final Jam’, in which she essayed the role of Mitchie Torres, the same character which she had played in the original. She even lent her voice to four tracks from this movie.
This singer and actress next starred in the comedy series called ‘So Random’ which released in 2011. However, the second season of the series didn’t see the light of the day.
After a short hiatus from music, Demi returned with her album titled ‘Unbroken’ in 2011. The songs from this album received mixed responses from the critics, but the single ‘Skyscraper’ from this collection topped the ‘Billboard’ countdown chart.
In 2012, Demi became one of the judges of the singing reality show ‘The X-Factor’, where she reviewed the skills of many aspiring singers along with other contemporaries from the music industry such as Simon Cowell.
Continue Reading Below
Lovato released an album titled ‘Glee’ in the year 2013. The album turned out to be a best-seller of the year and tracks from this collection were considered infectious by music lovers. They even grabbed the top spots in the musical charts of various nations like New Zealand and Spain, apart from America.
This acclaimed singer even lent her voice to the soundtrack of the album ‘The Mortal Instruments: City of Bones’ in the same year.
On February 9, 2014, she embarked on the 'Neon Lights Tour' to promote her fourth studio album entitled 'Demi', which was released the previous year.
In September 2014, this multi-talented artist ventured into the skincare business and announced her upcoming range of skincare products called ‘Devonne by Demi’. 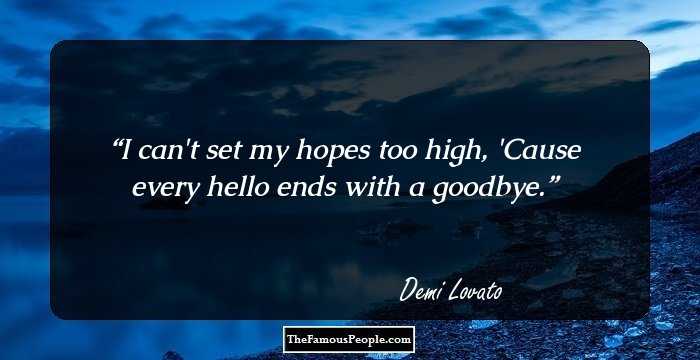 Leo Singers
Leo Musicians
Leo Actresses
Women Singers
Major Works
This celebrity is mainly known for her album ‘Don’t Forget’. The songs of this collection were not just chartbusters, but the album was even awarded a gold certification by the ‘Recording Industry Association of America’ (RIAA). The success of this album catapulted Demi’s career to a great height.
Recommended Lists:

Leo Pop Singers
Women Musicians
American Singers
Female Pop Singers
Awards and Achievements
Demi was felicitated with the ‘Choice Music Tour Award’ at the ‘Teen Choice Awards’ ceremony held in 2009.
Her song ‘Skyscraper’ from the album received the ‘Best Video With A Message’ award at the ‘MTV Video Music Awards’ ceremony in 2012. 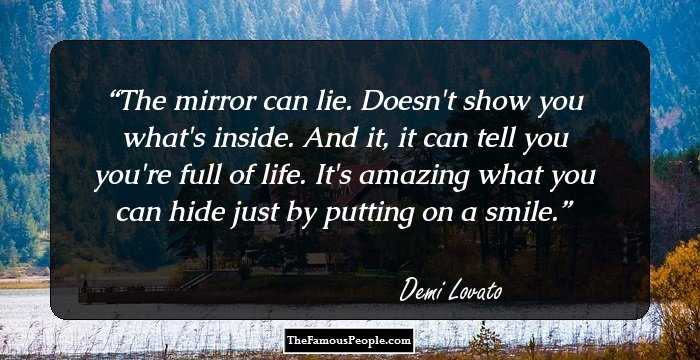 American Actresses
American Musicians
American Pop Singers
Actresses Who Are In Their 30s
Family & Personal Life
Demi Lovato was home-schooled due to bullying at school. She associated herself with an organization called ‘PACER’, which helps victims of bullying.
Even while she was at the peak of her career, in 2010 Lovato became a victim of depression and an eating disorder. She sought medical help to solve the problem by getting herself admitted at a rehabilitation centre.
She made headlines for dating celebrities such as Joe Janas and Trace Cyrus during the same period.
In 2011, she returned from rehab to lead a sober lifestyle. She acknowledged to drug and alcohol abuse. She admitted to cocaine use, and said that she had even smuggled cocaine onto airplanes. She revealed that she had a nervous breakdown, and was diagnosed with bipolar disorder during her treatment.
Demi was associated with ‘Free the Children’, which operates mainly in African nations like Ghana, Kenya, and Sierra Leone.
She has confessed that she’s religious and has advocated the rights of gay people on many occasions.
Recommended Lists:

Quotes By Demi Lovato | Quote Of The Day | Top 100 Quotes

See the events in life of Demi Lovato in Chronological Order