(Singer-Songwriter, Actress and Lead Vocalist of the Band ‘Blondie’)

Deborah Ann Harry, better known by her stage name Debbie Harry, was the lead singer of the punk rock and new wave band, Blondie. She loved singing from a young age and used to perform in her church choir. Growing up, she was a confused young woman who had no idea what to do with her life. She simply wandered around after college for some time and hopped from one job to another. She has worked as a waitress, secretary, playboy bunny and a dancer. Her musical career began in the 1960s when she joined the folk rock group, ‘The Wind in the Willows’. She met the guitarist Chris Stein while performing with the band ‘The Stilettos’ and formed the band, ‘Blondie’ with him. The band became very famous in the Kansas and New York City circuits with their energetic and entertaining performance. Naturally blessed with glamorous looks and blonde hair, Debbie oozed sex appeal and was catapulted to the status of a sex symbol. Blondie produced several super hits including ‘Call Me’ and ‘The Tide is High’. However, the band split up due to personal differences and she embarked on a solo career with the album ‘KooKoo’. She also branched into acting and has appeared in around 30 films so far. American People
Rock Singers
American Women
Florida Actresses
Florida Musicians
Childhood & Early Life
She is the adopted daughter of Richard Smith Harry and his wife Catherine. Her parents own gift shops in New Jersey.
She graduated from Hawthorne High School in 1963. She went to the Centenary College from where she graduated in 1965 with a degree in Associate of Arts.
During the 1960s she moved to New York and worked at a number of odd jobs. She has been a waitress, a dancer, a playboy bunny among others. 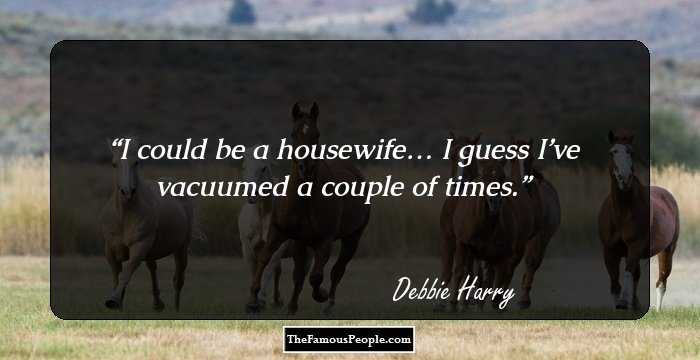 Quotes: I
Continue Reading Below
Career
Her musical career began in the late 1960s when she joined the folk rock group, ‘The Wind in the Willows’ as a backing singer. The band released one album in 1968.
She joined the band ‘The Stilettos’ in 1974 and performed with Elda Gentile and Amanda Jones. Guitarist Chris Stein also became a member shortly after her joining.
She left The Stilettos and co-founded the band ‘Blondie’ with Chris Stein. The duo had also begun dating. The band became famous following the commercial success of their debut album.
Sharp featured and pretty, she caught the attention of her fans with her platinum blonde hair and glamorous looks. She became a sex symbol and was soon a punk icon. She became such an inherent part of Blondie that people thought it was her name!
Blondie’s 1978 album, ‘Parallel Lines’ provided them the breakthrough they needed. It peaked at No.1 in the U.K. and also performed well in the U.S.
Their next album, ‘Eat to the Beat’, released in 1979 was also a big hit. It featured a mix of pop, reggae, and punk style of music and reached No.1 in the U.K. album chart.
Debbie took a break from the band and started working on her debut career. Her debut solo album, ‘KooKoo’ was released in 1981.
Blondie broke up for good in 1982 though Debbie remained good friends with Stein. Another one of her solo albums, ‘Rockbird’ was out in 1986. In spite of not producing any top ten hits, it sold well and was credited Gold in the U.K.
In 1989, she released ‘Def, Dumb & Blonde’ and started using her original name “Deborah” professionally. It had the hit single, ‘I Want That Man’ and the tracks ‘Kiss it Better’ and ‘Maybe for Sure’.
Continue Reading Below
Her solo album ‘Debravation’ was out in 1993. One of the singles from the album, ‘Strike Me Pink’ stirred much controversy due to the disturbing nature of its video which depicted a man drowning. The album was unsuccessful.
After a gap of 14 long years, she brought out her album, ‘Necessary Evil’ in 2007. She promoted the album on Cyndi Lauper’s True Colors Tour where she performed a number of songs from the album.
In addition to her singing career, she has also appeared in a number of films in small roles, the most notable ones being ‘Hairspray’ (1988), ‘Heavy’ (1995), ‘All I Want’ (2002), and ‘Elegy’ (2008).
Major Works
Blondie’s ‘Parallel Lines’ was their breakthrough album that catapulted the band to stardom. The album not only peaked at No.1 in the U.K. album chart, but also sold over 20 million copies worldwide.
‘Eat to the Beat’, another No.1 hit in the U.K. was a multi-platinum album by the Blondie. The most successful singles from the album were ‘Dreaming’, ‘Union City Blue’ and ‘Atomic’. The album was one of Billboard's top 10 albums of 1980 in the U.S.
Awards & Achievements
Blondie won the Juno Award for Best Selling Single, ‘Heart of Glass’ in 1980.
The band Blondie was inducted into the Rock and Roll Hall of Fame in 2006.
Personal Life & Legacy
She is not married and does not have any children. She was once in a relationship with guitarist Chris Stein with whom she had formed the band Blondie.
Inspired by the philanthropic works Elton John is involved in, she became involved with charities fighting cancer and endometriosis.

See the events in life of Debbie Harry in Chronological Order