Barbara Hepworth was an English artist and sculptor. She was one of the most outstanding and influential women artists of the twentieth century. Her artistic works were among the earliest abstract sculptures produced in England. Eldest of the four children in the Hepworth family, she developed an early fascination with natural forms and textures and decided to become a sculptor when she was a teenager. She received her training in sculpture from the Leeds School of Art and later went on to earn a county scholarship at the Royal College of Art. After finishing her studies at the college, she traveled to Italy and learned the art of carving the marble. Meanwhile, she also got married and upon returning to London became one of the leading figures in the 'new movement', associated with direct carving. She held successful joint exhibitions and received appreciation for her earliest works which seemed to be naturalistic with simplified features. Over time, her artistic talent matured and she began experimenting with new wood carvings that incorporated string and metal. Later, an increase in demands and public commissions encouraged her to employ assistants for her work and also to produce editions in bronze. She spent her later life serving as a mentor to dozens of other artists and writers. She is rightfully regarded as the most enduring artist of her times whose landscapes and linear abstract works are quite breathtaking in their clarity and vision Tracey Emin
Artists #112
Sculptors #10
Artists & Painters #102
DID WE MISS SOMEONE?
CLICK HERE AND TELL US
WE'LL MAKE SURE
THEY'RE HERE A.S.A.P
Quick Facts

Cause of Death: Accidental Fire

awards: Order of the British Empire

British Celebrities
British Women
Women Artists
British Artists
Women Sculptors
Childhood & Early Life
Jocelyn Barbara Hepworth was born on January 10, 1903, in Wakefield, West Riding of Yorkshire, to Herbert Hepworth, a civil engineer who later became County Surveyor, and his wife, Gertrude.
She was the eldest of four children in her family. She received her early education from the Wakefield Girls' High School, and later earned a scholarship to the Leeds School of Art.
At the art school, she met her fellow student, Henry Moore, with whom she struck a lifelong friendship and who had an important influence on her work.
She won a county scholarship to the Royal College of Art (RCA) and studied there from 1921 and earned a diploma in 1924. 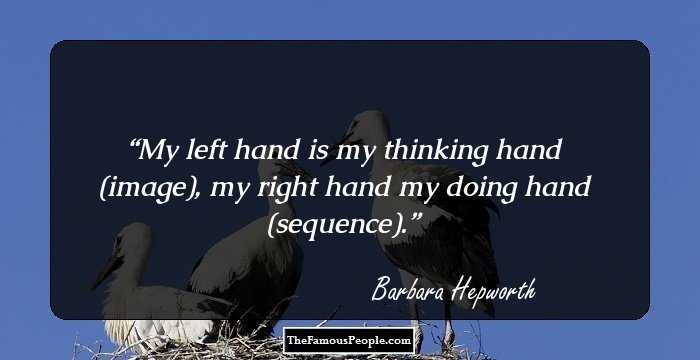 Who Is The Most Popular BTS Member?
Career
In 1924, after completing her studies at the RCA, Hepworth travelled to Florence, Italy on a West Riding Travel Scholarship. In Italy, she learned how to carve marble from the master sculptor, Giovanni Ardini.
In 1926, she returned to London with her husband, where both of them exhibited their works together from their flat.
In 1933, she became one of the founders of the Unit One art movement; the other founders of the movement were artists, Paul Nash and Ben Nicholson. The movement sought to unite surrealism and abstraction in British art.
In 1935, she produced ‘Three Forms’, an abstract sculpture consisting of a sphere and two nearly oval shapes, which according to critics symbolized the birth of her triplets.
In 1937, she designed the layout for ‘Circle: An International Survey of Constructivist Art’, a 300-page book that surveyed Constructivist artists.
During the Second World War, she moved with her children to Cornwall in southwestern England and later produced works such as ‘Tides’ (1946).
In 1949, she and her second husband Nicholson co-founded the Penwith Society of Arts at the Castle Inn along with many other artists including Peter Lanyon and Bernard Leach.
In 1950, she began to work with bronze. The following year, she was commissioned by the Arts Council to create a piece for the Festival of Britain. The resulting work featured two Irish limestone figures titled ‘Contrapuntal Forms’ which was displayed on the London's South Bank.
During the 1950s, she presented ‘Groups’, an experimental series which consisted of clusters of small anthropomorphic forms in marble so thin that their translucence creates a magical sense of inner life.
Continue Reading Below
During the 1960s, she received a number of commissions for truly huge sculptures, an example of which is ‘Four-Square Walk Through’ (1966), a gigantic geometrical piece.
Later in her career, she also experimented with lithography and produced two lithographic suites. The latter one titled ‘The Aegean Suite’ (1971) was inspired by Hepworth's trip to Greece in 1954 with Margaret Gardiner.
Major Works
One of her most famous sculpture works is the ‘Single Form’, which is made in the memory of her friend and collector of her works, the former UN Secretary General Dag Hammarskjöld. The sculpture currently stands in the plaza of the United Nations building in New York City.
Awards & Achievements
In 1958, she was appointed the Commander of the Order of the British Empire (CBE).
In 1965, she was conferred with the title of Dame Commander of the Order of the British Empire (DBE).
In 1968, she was presented with the Freedom of St. Ives award in recognition of her significant contributions to the town.
In 1973, she was elected an honorary member of the American Academy of Arts and Letters.
Personal Life & Legacy
In 1925, after travelling together through Siena and Rome, she married John Skeaping, also a sculptor, in Florence. In 1929, they were blessed with a son, Paul, but the couple divorced in 1933.
In 1933, she entered into a wedlock with the painter, Ben Nicholson, with whom she had triplets; Rachel, Sarah, and Simon, in 1934. The couple divorced in 1951.
Barbara Hepworth died in an accidental fire on May 20, 1975, at the age of 72, at her Trewyn Studios, St. Ives, Cornwall.
You May Like

See the events in life of Barbara Hepworth in Chronological Order