(Italian Painter and Sculptor Known for His Works: ‘Redheaded Girl in Evening Dress’ and ‘Madame Pompadour’)

Advanced Search
Italian painter Amedeo Clemente Modigliani was considered among the most accomplished painters who reveled in painting the nudes. In a career that did not last long he created a lasting impression on the hearts and minds of people in artistic circles. Modigliani’s mother was an early influence in his life and always encouraged him to pursue his ambition of becoming a painter; which is why he was sent off to Florence in order to learn the ropes of painting. Although Modigliani was born in Italy, a great centre of art and culture, he moved to France as a young man and became a part of the new wave of artists that came into prominence in that era. In addition to being a prolific painter, Modigliani was also a sculptor and produced some excellent pieces that were inspired from African culture. Modigliani’s most famous work was the series of nudes that he drew as part of a solo exhibition and remains his most stellar work; although the work was criticised for obscenity at the time. Modigliani suffered from several illnesses throughout his life and that was something that hampered his work. He died at the young age of 35. Donatello
DID WE MISS SOMEONE?
CLICK HERE AND TELL US
WE'LL MAKE SURE
THEY'RE HERE A.S.A.P
Quick Facts

Cause of Death: Tubercular Meningitis

Italian Celebrities
Male Sculptors
Italian Sculptors
Italian Artists & Painters
Male Artists & Painters
Childhood & Early Life
Amedeo Modigliani was born in a Jewish family on July 12, 1884, in Livorno, Tuscany, Italy, to Flaminio Modigliani and Eugenie Garsin. His father belonged to a family of entrepreneurs while her mother came from an intellectual, scholarly family.
Amedeo Modigliani suffered from different illnesses like pleurisy and tuberculosis at different points in his childhood as a result of which he wasn’t enrolled at a school. He was instead home schooled by his mother in his early life. Modigliani had shown his talent as a painter at an early age and her mother was convinced that he had the talent to become a professional.
Modigliani’s mother sent him to Florence in 1898 in order to train as a painter under the guidance of Guglielmo Micheli at his art school and he trained there for two years. At the art school, he got acquainted with other artists and his education was enriched.
Modigliani enrolled at the ‘Free School of Nude Studies’ located in Florence, in 1902. After spending a year there, he went to Venice and lived there for a few years before moving to Paris. 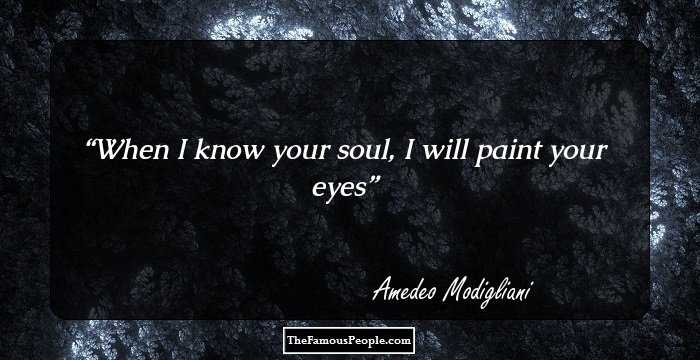 Quotes: Will, Soul, I
Continue Reading Below
Career
In 1906 Amedeo Modigliani arrived in Paris, which was then the den of young artists and immersed himself in the avant-garde artistic scene in the city. During the initial days in Paris, Modigliani painted vigorously and sometimes drew as much as hundred sketches in a day. He also became friends with Pablo Picasso and poet Max Jacob.
Amedeo Modigliani became acquainted with a man named Paul Alexandre while he was in Paris and true to his reputation of being a friend of the young artists in the city; he bought some of Modigliani’s works. In 1908, two years after first setting foot on Paris Modigliani hosted his first exhibition.
Romanian sculptor Constantin Brancusi aroused Modigliani’s interest in sculpture and he spent some time studying African sculpture. He did some sculpting and in fact he exhibited his work at the Salon d’Automne in 1912 that showed whatever he learnt of African sculpture. Modigliani did not pursue sculpting for long but the stint had a profound influence on his painting.
The breakout of the First World War in 1914 had an adverse influence on Modigliani’s life as he could not find customers for his work and at the same time his health had deteriorated. However, some of his friends rallied around and bought some of his work.
In 1917, Amedeo Modigliani painted 30 nude painting that have been rated as his best and the most refined work. After the completion of these paintings, an exhibition was organised for him but the authorities did not allow the event to be hosted on the charge that the paintings were indecent. 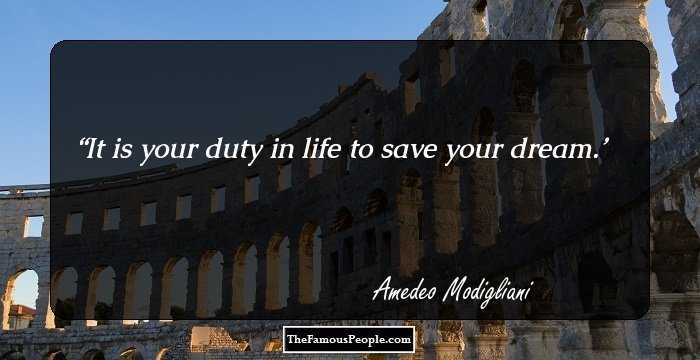 Quotes: Life
Major Works
The series of nude paintings that Amedeo Modigliani drew in the year 1917 is regarded as his greatest work and among them ‘Nude Sitting on a Divan’ is considered to be the finest.
Personal Life & Legacy
After a series of relationships throughout his life Amedeo Modigliani seemed to have settled down with Jeanne Hebuterne, an arts student and the couple started living together in the French Riviera in 1917. A daughter was born the following year.
Amedeo Modigliani had suffered from several illnesses throughout his life and after suffering from tubercular meningitis for more than six months; he died on January 24, 1920 at the age of 35. 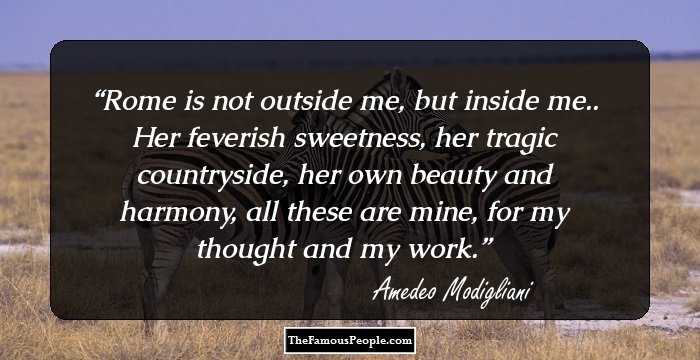 See the events in life of Amedeo Modigliani in Chronological Order