Daddy Yankee is the stage name of Puerto Rican singer, songwriter, rapper, actor and record producer Ramón Ayala, who is one of the pioneering reggaetón artists who helped establish a mainstream market for the music style. Influenced by traditional hip-hop, as well as Spanish-language dancehall reggae, he is one of the musicians who first fused different styles of music to create and popularize a new genre of music. From humble beginnings with independently released mixtapes that he himself produced, he went on to become the co-owner of the record company 'El Cartel Records'. The company also released his first commercially successful international album 'Barrio Fino', which made him an international star after a decade of struggle. He won the 'Latin Grammy Award' for the album, which also included his best known single 'Gasolina'. Following his international success, he was named among 100 most influential people by 'Time' magazine, bagged endorsements for brands like Reebok and Pepsi, and signed a $20 million contract with Interscope Records. He later branched into acting and producing, and is known for the movie 'Talento de Barrio'. Puerto Rican People
Puerto Rican Men
Male Singers
Male Rappers
Aquarius Actors
Childhood & Early Life
Daddy Yankee was born as Ramón Luis Ayala Rodríguez on February 3, 1977, in Río Piedras, the largest district of San Juan, Puerto Rico. His father was a salsa percussionist, otherwise known as bongosero, and while his mother was a manicurist, she came from a family of musicians.
Daddy Yankee and his brother, Nomar, had been exposed to music since they were children, as their father would often perform in front of them. Daddy Yankee started singing and rapping at the age of 13, with special focus on lyrical improvisation.
He later became interested in reggaetón, Spanish-language dancehall reggae, and was immensely influenced by the style of Vico C, and often imitated artists like DJ Playero, DJ Nelson, and DJ Drako. While this type of music was not widely popular at that time, San Juan DJs used to mix hip-hop, dancehall, and freestyle rap, which was particularly loved by the local audience.
As a teenager, he aspired to be a professional Major League Baseball player and was all set to get signed by the Seattle Mariners. However, his baseball dreams were shattered after he sustained two bullet wounds from an AK-47 after being caught in the crossfire of a barrio gun battle.
Continue Reading Below
You May Like

Who Is The Most Popular BTS Member?
Career
While recovering from the bullet wounds, Daddy Yankee got the opportunity to fully focus on his music career. By the time the accident happened, he was already collaborating with DJ Playero and was a featured artist in his 1992 mixtape 'Playero 37'.
On April 2, 1995, with the help of Playero, he released his first mixtape as a solo artist, 'No Mercy', from White Lion Records and BM Records. The politicians imposed a ban on him as the album contained rebel lyrics, but the local audience were able to relate to the language which made it a moderate success.
In August 1997, he released the compilation album 'El Cartel' independently, and later that year collaborated with fellow rapper Nas in the song 'The Profecy'.
In 2001, he followed up with another independent release, 'El Cartel II'; while both the albums were successful in Puerto Rico, they failed to make an impression in Latin America.
He earned recognition from urban music fans in Miami and New York with his second studio album 'El Cangri.com', which released on June 20, 2002 and touched on issues like terrorism, corruption and religion. The single 'Latigazo' was played at Spanish-language radio stations in the US, while the album peaked at 43 on Billboard's Top Latin Albums chart.
Following his first international success, he collaborated with renowned reggaeton singers and producers Luny Tunes in the album 'Mas Flow' in 2003. The same year, he released the top-ten compilation album 'Los Homerun-es'.
In 2004, he stormed into the mainstream market with the release of his third studio album, 'Barrio Fino', for which he co-wrote the lyrics, and is also credited as executive producer. The album's lead single, 'Gasolina', is considered one of the best examples of reggaeton music and ranked 9th on the '50 Greatest Latin Songs of All Time' list by Billboard.
He signed a record deal with Interscope Records in 2005, after Jimmy Iovine, the president of the label, met him in person in Puerto Rico. He released his next studio album, 'El Cartel: The Big Boss', from Interscope on June 5, 2007. The album brought together a number of pop-rap hit-makers including Scott Storch, will.i.am, Luny Tunes, Tainy, Akon and Mr. Collipark.
Daddy Yankee, who had played an extra in the 2004 film Vampiros, acted in the lead role of the film 'Talento De Barrio' and released its soundtrack album in 2008. He released his next studio album 'Mundial' on April 27, 2010, led by the single 'Grito Mundial'.
Continue Reading Below
The release of his sixth studio album, 'Prestige' was delayed by almost a year, to September 11, 2012, after a hurricane damaged El Cartel Records, destroying half of the album.
His next album 'King Daddy' was released on October 29, 2013 and was supported by his 'King Daddy Tour' covering several European and American cities.
In 2017, he collaborated with Latin pop-singer Luis Fonsi to produce the hit single 'Despacito', which topped the 'Billboard Hot 100' as the first Spanish-language song since 'Macarena' in 1996. He is currently working on his next studio album 'El Disco Duro'.
Major Works
Daddy Yankee's first international release, 'Barrio Fino', became immensely successful and is considered as one of the best albums for introduction into the reggaeton style. The album stayed on top of the Latin albums chart for about a year and sold over a million copies in the US alone.
His much awaited album 'El Cartel: The Big Boss' was successful both commercially and critically. It debuted at No.9 on the 'US Billboard 200' and received a Latin album triple platinum certification from RIAA.
Awards & Achievements
Since his international debut in 2004, Daddy Yankee has won 82 awards from 270 nominations. Notably, he has won one 'Latin Grammy Award', two 'Billboard Music Awards', 14 'Billboard Latin Music Awards', 2 'Latin American Music Awards', 6 'ASCAP Awards', 8 'Lo Nuestro Awards', and one 'MTV Video Music Award'.
Personal Life & Legacy
Daddy Yankee married Mireddys Gonzalez in 1994, at the age of seventeen, and became a father when he was eighteen. According to him, it was a confusing and hard experience.
While he treasures the secrecy of his private life, he opened up to the media for the first time during an interview with María Celeste Arrarás on Al Rojo Vivo. He mentioned that friendship has kept his marriage strong over the years and that he avoids temptation witnessing the downfall of many fellow artists.
Daddy Yankee and Mireddys Gonzalez have three children together: Yamilette, Jessealy and Jeremy. He is a devoted father who shares a very close bond with his children and often enlightens them against drugs and other social evils.
Trivia
Interestingly, Daddy Yankee is thankful for the bullet wounds he received at the age of seventeen, as it made him focused on music. It took him a year and a half to fully recuperate, but the bullet was never removed from his hip.

See the events in life of Daddy Yankee in Chronological Order 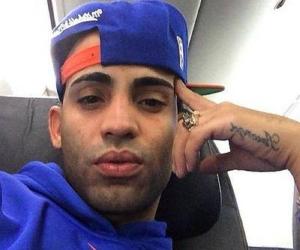