Cyrus McCormick was an American industrialist who invented the mechanical reaper and founded the McCormick Harvesting Company. Born to an inventor father in Virginia, Cyrus received limited formal education but, displayed a knack for mechanics and soon learned the skills of his father, who used to conduct numerous experiments with farm machinery. When his father abandoned the work to build a reaper, Cyrus took over the project and after making several changes to the original design, in 1831, he was able to construct the first commercially successful mechanical reaper. However, over the next few decades, he faced the threat of competing inventors but was able to improve its mechanism, thus making his machine a success and maintaining his market position. In 1847, he established the McCormick Harvesting Machine Company in Chicago to manufacture, market, and distribute reapers. With innovative business practices, over the years, McCormick Harvesting Machine Company became the largest farm equipment manufacturing firm in the country. In 1871, when the factory was burnt down in the great Chicago fire, he rebuilt it with increased capacity and expanded his business. Subsequently, Cyrus also served as a leading public figure and remained active in Presbyterian causes as well as Democratic politics. An extraordinary inventor with unparalleled business acumen, Cyrus McCormick will always be remembered for his contributions to the advancement and mechanization of agriculture. 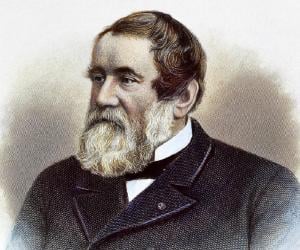 American People
American Men
Aquarius Entrepreneurs
American Entrepreneurs
American Inventors & Discoverers
Childhood & Early Life
Cyrus Hall McCormick was born on February 15, 1809, Rockbridge County, Virginia, U.S., to Robert McCormick, a farmer and inventor, and his wife, Mary Ann "Polly" Hall. He was the eldest of the eight children of his parents.
McCormick received limited education from local schools but possessed his father’s creative edge since childhood and spent most of the time in his father’s workshop. Over the years, Robert was successful in inventing several practical farm implements but had failed in his experiment to build a successful reaping machine.
Continue Reading Below
You May Like

The Hottest Male Celebrities With The Best Abs
Career
In 1831, when Robert abandoned the idea, Cyrus took over the task to build a reaper. After incorporating several changes to the original design of his father, Cyrus achieved success in constructing a reaping machine and first demonstrated it in Virginia in 1831.
Over the next few years, Cyrus worked to improve his machine, increasing its capacity and enhancing its mechanism. In June 1834, he finally patented the invention but was unable to sell any as the machine was unable to handle varying conditions.
In addition to farming, the McCormick family also had an iron foundry and operated in a metal smelting business. After facing difficult financial times which culminated in the Panic of 1837, the foundry failed and left the family in debt.
Thereafter, Cyrus turned to further improve his mechanical reaper in order make a business out of it. The following year, he sold one reaper and after continuously working to enhance the machine, Cyrus succeeded and was able to sell 50 reapers in 1844.
In 1845, he patented a second design of his improved reaper. In 1847, he established a factory in Chicago to build the machines with the financial help from the mayor, William Ogden. The firm was able to sell 800 machines in the first year and eventually came to be known as the McCormick Harvesting Machine Company.
Over the next few years, Cyrus faced competition regarding patent issues of the mechanical reaper with several other inventors. In 1848, after Cyrus filed to renew his patent for the reaper, the US Patent Office denied his request due to a similar patent granted few months earlier.
Subsequently, he became involved in the legal battle with rival creators but was unable to win the case and the basic machine was passed into the public domain. Then, Cyrus decided to defeat his competitors through innovative business practices.
With the development of railroads leading to the expansion of his business, Cyrus also boosted the sales of his machine by using creative marketing techniques such as mass production, high publicity, hiring salesmen for public demonstration in the field, and providing warranty of product.
As a result, the business bloomed and the McCormick mechanical reaper became known in almost every part of the country. Soon, McCormick mechanical reapers were introduced to European farmers and by 1856, the McCormick Company was selling more than 4,000 machines a year.
Continue Reading Below
During the Great Chicago Fire of 1871, when the McCormick factory was destroyed, his wife encouraged McCormick to rebuild the company.
In 1873, he reopened a new factory with increased capacity and also started pursuing foreign markets to expand the business. In 1880, Cyrus handed over the control of his company his son, Cyrus McCormick, Jr.
In addition to being an inventor and industrialist, McCormick also became involved in philanthropic affairs and was active in the Presbyterian Church and the Democratic Party. He acted as the principal benefactor in establishing the McCormick Theological Seminary in Chicago.
Major Works
Cyrus McCormick was the first person to effectively mechanize grain harvesting with his invention of the first commercially successful reaping machine. At a time, when the grain productivity was limited to the amount of manual labor, he created the mechanical reaper whose working and mechanism formed the basis for modern-day harvesting machines.
In 1847, McCormick established his own reaper manufacturing factory in Chicago which continued to expand over the years and emerged as the leader in producing agricultural equipment. By incorporating innovative marketing strategies and managing an efficient workforce, he rose to unprecedented success as an industrialist.
Awards & Achievements
In 1851, McCormick’s reaper won the Gold Medal at the Crystal Palace Exhibition in London.
In 1878, he was elected to the prestigious French Academy of Sciences for "having done more for the cause of agriculture than any other living man."
In 1975, Cyrus McCormick was inducted into the Junior Achievement U.S. Business Hall of Fame.
Personal Life & Legacy
In January 1858, McCormick married Nancy "Nettie" Fowler, his secretary. The couple had seven children together.
After suffering from paralysis during the last four years of his life, McCormick died on May 13, 1884, at his home in Chicago, Illinois, U.S.A. He was interred in Graceland Cemetery.
You May Like

See the events in life of Cyrus McCormick in Chronological Order