Advanced Search
Crispian Mills is an English singer-songwriter and guitarist, who is best-known as the frontman of the psychedelic indie rock band Kula Shaker. He is the son of director, Roy Boulting, and actress Hayley Mills. In the early 1990s, along with few friends, he formed the band Kula Shaker. Their debut album ‘K’ released in 1996. The band is known for their interest in traditional Indian music, mysticism and culture. Some of their famous songs such as ‘Govinda’ and ‘Tattva’, feature lyrics that are written in Sanskrit. Even the band’s name is inspired by an Indian 9th century king named King Kulasekhara. Some of the band’s songs also feature traditional Indian instruments like the tabla and the sitar. Though they have achieved a lot of commercial success, they have also been disliked by several critics. For some time, Mills was also the lead guitarist and frontman of the band ‘The Jeevas’. Other than music, he is also known for directing two films ‘A Fantastic Fear of Everything’ and ‘Slaughterhouse Rulez’. 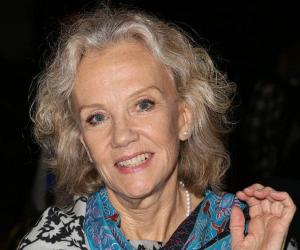 British People
Lyricists & Songwriters
British Men
Male Singers
Male Musicians
Childhood & Early Life
Crispian Mills was born on 18 January 1973, in Hammersmith, London, England. His father, Roy Boulting, was a filmmaker and his mother, Hayley Mills, was an actress. His parents divorced when he was around four years of age.
He studied at various private schools. From an early age, he also developed a deep interest spirituality. He read the Mahabharata, a famous Sanskrit epic from India, and also became a vegetarian. He also got involved with the International Society for Krishna Consciousness, an organization that promotes Bhakti Yoga.
He also started taking LSD, and listening to the band ‘The Doors’, which made him quite interested in psychedelic music. Soon, however, he realized that drugs were not the sole answer to the enlightenment which he sought. In the early 1990s, he also formed the band ‘Kula Shaker’.
Continue Reading Below
Career
In an interview, Crispian Mills stated that as a singer, he could also talk about things such as premature love and teenage sex, or instead, he would choose to talk about the universal truths. Inspired by Hindu philosophy, his band released their first song ‘Govinda’, at an outdoor festival in England.
The band soon released their debut album ‘K’ in 1996. It was a huge success in Britain, and also reached first position on the UK Charts. However, it didn’t do quite well in America. Along with their first single, ‘Govinda’, the album includes several other tracks such as ‘Magic Theatre’, and ‘Sleeping Jiva’. The album was ranked at 879th position in the list of ‘All Time Top 1000 Albums’ by Colin Larkin in 2000.
Their second album was ‘Peasant, Pigs and Astronauts’, which released in 1999. The album was a huge success, reaching ninth position on the UK Albums Chart, though it didn’t do very well in the US. It included tracks such as ‘Great Hosannah’, ‘Mystical Machine Gun’, and ‘Sound of Drums’. Despite their success, the band soon split up, and Mills formed another band ‘The Jeevas’.
’The Jeevas’ released two albums ‘1,2,3,4’, in 2002, and ‘Cowboys and Indians’, in 2003. In 2004, Mills also contributed to the charity album with the Californian School of Braja, along with The Jeevas, and few members of Kula Shaker. Soon, the band Kula Shaker was reunited and they released an extended play ‘Revenge of the King’ in 2006.
The ‘Kula Shaker’ released their third album, ‘Strangefolk’, in 2007. It included tracks such as ‘Die for Love’, ‘Fool That I Am’, ‘Song of Love/Narayana’, and ‘Great Dictator (Of the Free World)’. The band released two more albums, namely, ‘Pilgrims Progress’, and ‘K 2.0’, in 2010 and 2016, respectively.
Film Career
Shortly after his father passed away in 2011, Crispian Mills began writing film scripts as well. He wrote a screenplay named ‘The Winged Boy’. Though it was purchased by Gold Circle, a production company, but it was never made into a film.
He wrote and co-directed the 2012 horror comedy film ‘A Fantastic Fear of Everything’. The film was a commercial failure, and was met with mixed to negative reviews.
He directed and wrote another horror comedy film ‘Slaughterhouse Rulez’ which was released in 2018. Like his previous film, it too a commercial disaster, and received mixed to negative reviews.
Family & Personal Life
Crispian Mills married Josephine Mills, a former model, in 1995. They have two sons named Hari and Charlie.
Mills was initiated into the Hindu Gaudiya Vaishnavism tradition in 1997. He also has a spiritual name ‘Krishna Kantha Das’.
Mills gained huge controversy when he praised the Swastika symbol which is associated with the German Nazis. However, he later clarified that he loved the Swastika symbol due to its spiritual importance, and its origins in Hinduism, though it may have been later hijacked by the Nazis.

See the events in life of Crispian Mills in Chronological Order