Advanced Search
Clarence Darrow, at the peak of his career, was the most famous trial lawyer in the United States. He grew up in a small town in Ohio and from a very young age, started advocating free-thinking and equal rights for women. With a traditional rural upbringing, Darrow always felt the urge to make a difference in the social status of women and also practiced abolitionist views. A strong supporter of female suffrage and empowerment, Darrow was one of the few members of the American Civil Liberties Union, who strived to make a difference in the world he lived in. Apart from having such strong activist views, his career as a lawyer was one with tumultuous twists and turns. He is renowned for supporting the teenage killers - Leopold and Loeb - during their trials for murdering a 14-year-old. Several other cases he dealt with include, the Scopes ‘Monkey’ Trial’, the Massie Trial and the famous, Ossian Sweet trial. Decades after his death, he is still remembered as a vociferous orator, his witty demeanor and for his strong support of the ‘underdogs’ during complicated trials. In modern times, he is regarded as one of the greatest criminal defense lawyers in American history. Jimmy Carter
DID WE MISS SOMEONE?
CLICK HERE AND TELL US
WE'LL MAKE SURE
THEY'RE HERE A.S.A.P
Quick Facts

American Celebrities
American Men
University Of Michigan
Male Lawyers
American Lawyers
Childhood & Early Life
Clarence Darrow was born to Amirus Darrow and Emily Darrow in Ohio on April 18, 1857. His father was an abolitionist and his mother, was an avid advocate of women’s rights.
He attended Allegheny College and then enrolled in Michigan Law School, but failed to graduate from both the institutions. He was finally admitted to the bar in 1878, where he began reading law in Youngstown, Ohio. 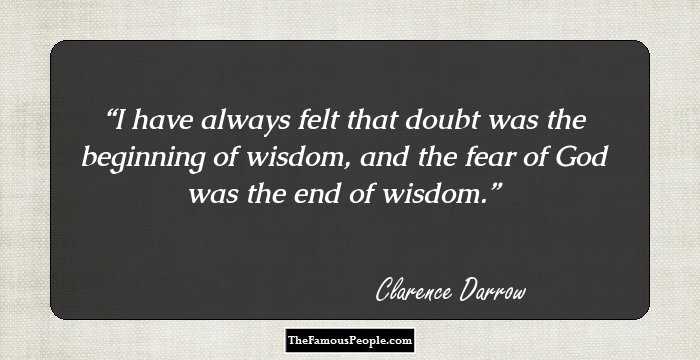 Quotes: God, Fear, I
Continue Reading Below
Career
He started his own practice in Andover, Ohio and was soon involved in Democratic Party politics. Following his close involvement with the political scenario in Ohio, he was appointed as the town counsel for his achievements and contributions.
In 1887, he moved to Chicago with his wife and son, where he worked with the city government as a lawyer. Here, he made a mark for himself at Democratic Party rallies and while engaging in other projects that required his oratory skills.
With the help of a close friend, John Altged, he became a corporate lawyer for the ‘Chicago and Northwestern Railway Company’ and in 1894 he represented Eugene V. Debs, prosecuted by the government for initiating the Pullman Strike.
The same year, he took up his first criminal, murder case in his career. He chose to defend Patrick Prendergast, who was the murderer of the Chicago mayor, Carter H. Harrison, Sr. Many were taken aback by his decision to defend a criminal and although his defense failed miserably and the guilty was hanged to death, he decided that he wanted to become a criminal lawyer once and for all.
By 1897, he became known as one of the leading attorneys of America and also helped organize the Populist Party in Illinois. He decided, he would take a shot at the election and ran for the Congress as a Democrat, but did not get success.
From 1906 to 1908, he represented the Western Federation of Miners, charged with the murder of the former governor of Idaho, Frank Steuenenberg, in 1905.
In 1911, he was asked to represent the McNamara Brothers, who allegedly bombed the Los Angeles Times building on October 1, 1910. In November 1911, Darrow was charged with orchestrating a bribe to a prospective juror. Although he didn’t achieve what he wanted to, he managed to save the brothers from death sentence, but was also criticized by the public for bribing his way to a less severe punishment for the brothers.
Being unpopular among the other attorneys in America, he was effectively put out of business as a labor lawyer and he decided to take criminal cases instead. He always openly opposed ‘death penalty’ and became known for his witty ways and eloquent presentations in court.
In 1924, he defended the case of the teenage killers, Leopold and Loeb, who had kidnapped Bobby Franks, a fourteen year old boy. The case was hailed as the ‘trial of the century’ and both boys openly accepted their crimes. However, Darrow decided to mold the public and the judge’s heart with his eloquence. The boys were saved from death, but both were sentenced to life imprisonment.
He went on to fight a number of famous cases including, the ‘Scopes Monkey Trial’, the ‘Ossian Sweet’ case and the ‘Massie Trial’.
In 1931, he participated at the popular ‘Mecca Temple Debate’, on the topic, ‘Will the World Return to Religion’. Darrow received a mere 1,022 votes, while his rival received 2,359 votes.
Throughout his lifetime, Darrow wrote a number of books including, ‘Crime: Its Cause and Treatment’, ‘Persian Pearl’, ‘The Story of My Life’, ‘Resist Not Evil’ and ‘Marx vs. Tolstoy’. Even though none of these books went on to become best-sellers, it did narrate his boyhood reminisces and also his views on crime, politics and law. This also helped establish him as a prolific writer. 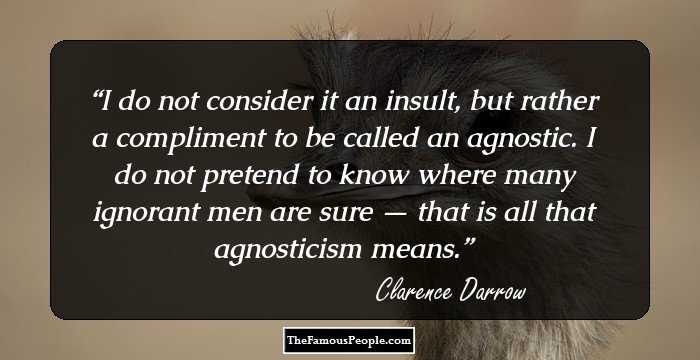 Quotes: I
Personal Life & Legacy
In 1880, he married Jessie Ohl and the couple had a son. They however got divorced in 1897 and he went on to marry Ruby Hammerston in 1903.
He passed away of a pulmonary heart disease. Even today, he is remembered as an aggressive litigator in the history of American criminal defense lawyers.
His life and works have been depicted in a number of movies including, ‘Alleged’ and ‘Darrow’. A number of plays have also been written based on his life including, ‘Darrow’, ‘My Name is Ossian Sweet’ and ‘Inherit the Wind’.
A number of books on his life have been published. These include ‘The People v. Clarence Darrow’, ‘Compulsion’, ‘The Angel of Darkness’ and ‘Clarence Darrow for Defense’.

Quotes By Clarence Darrow | Quote Of The Day | Top 100 Quotes

See the events in life of Clarence Darrow in Chronological Order