Chuck Berry or Charles Edward Anderson Berry was an American singer, songwriter and guitarist. He is known as the 'Father of Rock-n-Roll' and is regarded as one of the most popular and influential performers in the 'rhythm-and-blues' and 'rock-and-roll' music in the era of 1950s, '60s and '70s. His distinctive sounds from the guitar, vivid descriptions of teenage life, and the melodic virtuosities of the piano player (Johnnie Johnson) have served as a source of inspiration for every rock-and-roll band for more than half a century. He helped create rock and roll from rhythm and blues by combining clever lyrics, precise diction, characteristic country-western music devices, electronic effects and magnificent stage shows. Growing up with a family proud of its African-American and Native-American ancestry and singing in the choir of the Antioch Baptist Church could very well have been his inspiration. He says he borrowed his technique and guitar riffs from 'T-Bone Walker'. Legendary bands like The Beatles, Rolling Stones and the Beach Boys have covered numerous songs by Berry. Later on, he stopped recording albums, but played regularly on tours and on 'one-man' shows accompanied by independent musicians and bands Image Credit
https://www.bbc.com/news/entertainment-arts-37694911
(By Chess Records. Note there is an "R" in circle which is a registration mark for the Chess Records logo seen at lower right of the uncropped photo. (eBay item photo front photo back) [Public domain], via Wikimedia Commons)
Previous   Next

American Celebrities
Guitarists
Black Singers
Rock Singers
Black Musicians
Childhood & Early Life
Chuck Berry was born on October 18, 1926 in St. Louis, Missouri. He was the fourth child born to Henry, a contractor and deacon of a Baptist church, and Martha, a certified public school principal.
He went to Summer High School for education. In 1944, he was arrested and convicted of armed robbery and stealing a car at gun point in Kansas City. He was sent to the 'Intermediate Reformatory for Young Men' in Algoa for 3 years.
In 1947, he supported his family with multiple jobs. He trained as a beautician at the Poro College of Cosmetology and played at several night clubs. 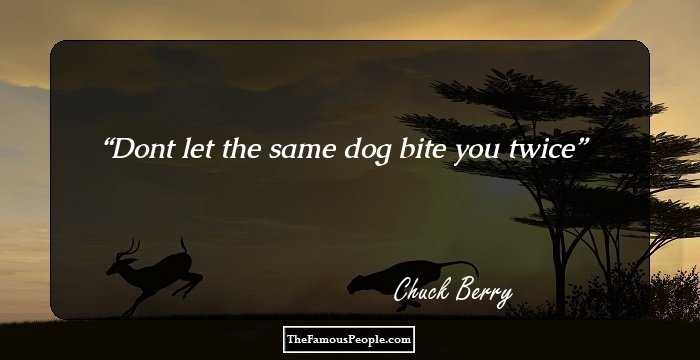 Black Guitarists
Lyricists & Songwriters
Black Rock Singers
Black Lyricists & Songwriters
Career
In 1952, Barry joined pianist Johnnie Johnson and drummer Ebby Harding. Soon, their band became the best in St. Louis.
In 1955, he met Muddy Waters—a popular American blues musician —in Chicago, who advised him to contact Leonard Chess of Chess Records. Berry was signed by the Chess Label. The first recording “Maybellene” sold a million copies and reached number one on the 'Billboard's Rhythm and Blues' chart.
His 1956 song “Roll Over Beethoven” reached #29 on the Billboard Top 100 chart.
From 1957 to 1959, he gave several US hits including “School Days”, ‘Rock and Roll Music”, “Sweet Little Sixteen” and ‘Johnny B. Goode”.
In 1964, he released eight singles. Three out of these went to the top20 of the Billboard 100. Between 1966 and 1969, he released five albums on the 'Mercury' label.
He came back to working with Chess in 1970. They released the live recording of “My Ding-a-Ling”, which went onto become his only #1 single.
In 1975, came out his album 'Chuck Berry' and in 1979, he came out with his last album 'Rock It'.
During the 1970s he performed extensively on the road with his Gibson guitar. But his performances became out-of-tune, erratic, un-rehearsed and un-coordinated in respect with those of his supporting musicians.
Chuck Berry performed at the White House on June 1, 1979 at the request of the then U.S. President Jimmy Carter.
Continue Reading Below
On his 60th birthday, Keith Richards, Eric Clapton, Etta James, Julian Lennon, Robert Cray and Linda Ronstadt organized a celebration concert for him. Taylor Hackford made a documentary on it called 'Hail! Hail! Rock 'n' Roll'.
Recommended Lists:

American Men
Missouri Musicians
Tall Celebrities
Tall Male Celebrities
Major Works
His song “Maybellene” is considered one of the pioneering rock and roll singles. The song was a major hit and sold over a million copies, reaching number one on Billboard's Rhythm and Blues chart.
Recommended Lists:

Libra Guitarists
Male Guitarists
American Singers
Libra Rock Singers
Personal Life & Legacy
Chuck Berry married Themetta 'Toddy' Suggs on October 28, 1948. They had a daughter named Darlin Ingrid Berry, on October 3, 1950.
In December 1959, Barry was arrested under the 'Mann Act'. Allegations were that he transported Janice Escalante, an Apache waitress, over state lines to work as a hat check girl and had sexual intercourse with the 14 year old. He was sentenced to one- and-a-half year imprisonment.
In 1979, Internal Revenue Service accused him of being an income tax evader. He was sentenced to four months imprisonment and 1,000 hours of community service.
In 1990, several women claimed that he had a video camera in the ladies' bathroom. Berry cited safety reasons as the necessity. A police raid at his house found the videotapes and 62 grams of marijuana. He was given a six-month suspended jail sentence, two years' of unsupervised probation and ordered to donate $5,000 to a local hospital.
Chuck Berry died of heart attack on March 18, 2017, at his home in Wentzville, Missouri, U.S.
Recommended Lists:

See the events in life of Chuck Berry in Chronological Order