Kurt Donald Cobain was an American singer-songwriter who rocked the music world with his band ‘Nirvana.’ He displayed artistic traits since early childhood. However, he had a troubled youth because of his parents’ separation. Finding solace in music, he started with playing the guitar and eventually went deeper into the world of music. Albums, such as ‘Bleach,’ ‘Nevermind,’ and ‘In Utero’ were some of his very popular ones. ‘Nirvana’ signing with ‘Geffen Records’ came as a major accomplishment in his career. Although he continued to grow exponentially on the professional front, his personal life was marred by his severe drug addiction. Plagued by health and family issues, he constantly struggled with depression and drug addiction issues throughout his life. However, his exemplary song writing skills helped ‘Nirvana’ sell over 25 million copies in the U.S. and over 75 million records all over the world, making him an iconic personality in the field of rock music. American Celebrities
Guitarists
Rock Singers
Lyricists & Songwriters
American Men
Childhood& Early Life
Cobain was born on February 20, 1967, in Aberdeen, Washington, USA, to Wendy Elizabeth, a waitress and Donald Leland Cobain, an automotive mechanic.
He was a happy go lucky child who was fascinated by art. His inclination towards art was evident from his drawings of cartoon characters on his room walls, which bore pictures of Donald Duck and the creature from the ‘Black Lagoon.’ His inspirational source was his grandmother Iris Cobain, an artist by profession.
Cobain was attracted to music from a very early age. By the age of four, he could play the piano and even write simple songs about visiting a local park. He was inspired by bands like ‘Ramones’ and ‘Electric Light Orchestra.’
He enjoyed listening to songs, such as ‘Motorcycle Song’ by Arlo Guthrie, songs composed by ‘The Beatles,’ ‘Hey Jude’ and many more.
Seeing his parents separate at the tender age of nine changed his temperament immensely. He became an introvert and at times rebellious.
Cobain visited his mother on weekends but stayed with his father. Seeing his mother suffer at the hands of her second husband, who was abusive, made him more depressed.
His father was not able to keep his promise of not remarrying for long. He remarried and brought two children into the house which resulted in a lot of bitterness in Cobain’s attitude towards his father and his new family.
As he went through a troubled childhood, his behavior in public became impudent. When he was taken to a therapist, he advised his parents to be together for the sake of their son’s well-being.
When his parents failed to work out things together, the complete custody of Cobain was given to his father. Nonetheless, Cobain’s behavior did not improve and he was sent to a family friend Jesse Reed’s house.
During the initial phase of living with new people, he was fascinated by Christianity and started attending church services. However, this new attitude of his was short lived.
On his father’s insistence, he joined the school’s wrestling and baseball team but delivered poor performances just to let his father down.
He started keeping company of homosexual boys. When people questioned his sexuality, he claimed to be gay just to keep away from people.
He started staying with his mother during his second year in high school. Just when he was about to complete graduation, he left school. As a result, his mother drove him out of the house.
Cobain met his future band-mate while studying at ‘Aberdeen High School.’ Though they did not connect at first, they eventually bonded because of their mutual love for punk rock. 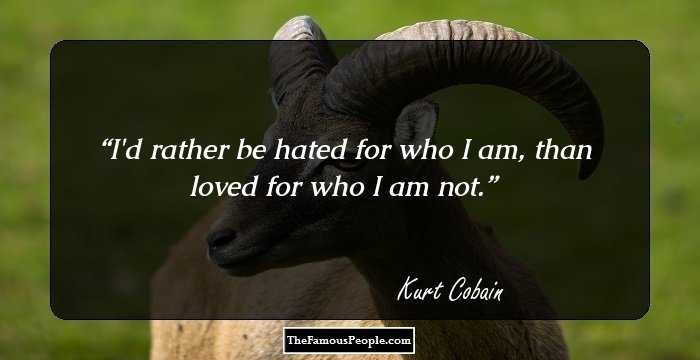 Quotes: I
Continue Reading Below
Career
Right after dropping out of high school, Cobain formed a rock band named ‘Fecal Matter’ in 1985, rehearing original materials and covers of bands, such as ‘The Ramones’ and ‘Led Zeppelin.’ The band dissolved a year later, but the tapes recorded by Cobain helped during the initial days of his future band ‘Nirvana.’
It was only in 1988 that Cobain finally decided on a name for his group ‘Nirvana.’ The band had Cobain as the lead vocalist and guitarist, Krist Novoselic as the bass guitarist, and Aaron Burckhard on the drums. ‘Nirvana’ came up with its first single ‘Love Buzz’ which was released by a small label called ‘Sub Pop Records.’
Their first album ‘Bleach’ was released in 1989. It showcased the album’s punk base along with signature heavy metal sounds.
Aaron Burckhard left the group and was replaced by Chad Channing who was later replaced by Dale Crover. Later on, Dale Crover was replaced by Dave Grohl.
‘Nirvana’ was getting famous in places like Seattle. Around the same time, Cobain started trying his hand at writing songs, such as ‘About a Girl.’
The year 1990 brought in more associations for ‘Nirvana’ and the band started collaborating with prominent personalities from the rock and roll genre. Eventually, they landed an opportunity to tour with the popular rock band ‘Sonic Youth.’
A major accomplishment was achieved in 1991 when the ‘Nirvana’ joined hands with ‘Geffen Records,’ following which ‘Nevermind’ was released.
‘Smells Like Teen Spirit’ was the single by ‘Nirvana’ that won them accolades in the music world. The song also made Cobain the best songwriter of the generation at the young age of 24.
Another album titled ‘In Utero’ was released in September 1993 and it attained huge success. The album is all about his bitter life experiences and struggles.
Continue Reading Below
He took another leap in the recording league through his single ‘Radio Friendly Unit Shifter.’ The single, which was part of the album ‘In Utero,’ describes the impact of the band’s last hit single ‘Smells Like Teen Spirit.’
Although Cobain grew immensely on the professional front, he was slowly drifting away from his band members on a personal level. Thereafter, he did a gig for MTV’s Unplugged series.
The growing popularity soon turned into a burden for Cobain which made him more apprehensive of his future. Unable to handle the pressure and expectation, he turned to drugs. 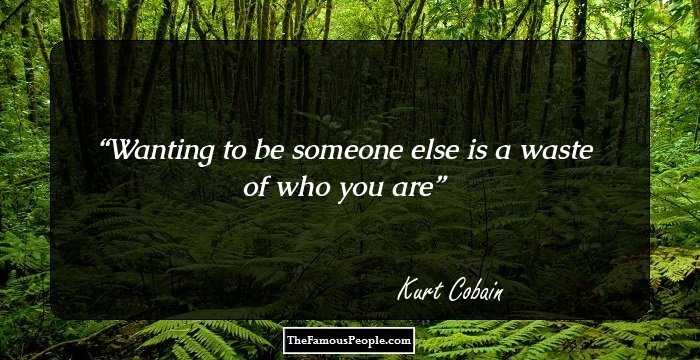 Quotes: You
Achievements
Cobain was ranked as the 12th greatest guitarist of all time by David Fricke of ‘Rolling Stone’ in 2003.
He was ranked seventh in MTV’s list of ‘22 Greatest Voices in Music.’ In the ‘Hit Parader’ list of ‘100 Greatest Metal Singers of All Time’ in 2006, he was placed 20th.
The ‘Kurt Cobain Memorial Committee’ put up a sign in Aberdeen, Washington, saying ‘Come As You Are’ in Cobain’s honor in 2005.
Post the sale of the ‘Nirvana’ song catalogue, Cobain replaced Elvis Presley as the highest earning deceased celebrity in 2006. The following year, Cobain was once again replaced by Elvis.
Cobain was inducted into the ‘Rock and Roll Hall of Fame’ in 2014, along with his two band mates, Novoselic and Dave Grohl.
Continue Reading Below
A book titled ‘Come As You Are: The Story of Nirvana’ was published by Azerrad who penned down every detail about ‘Nirvana’ and its members since the band’s inception.
Personal Life & Legacy
Cobain suffered from chronic bronchitis and a stomach issue throughout his life.
Troubled family and health issues made him indulge in alcohol and drugs. He started using drugs when he was just 13 and by 1990, he had become a severe addict.
He was also arrested a couple of times for spray painting buildings and wandering on streets in drunken state.
In 1987, Cobain started seeing a girl named Tracy Marander with whom he started living in Olympia. Though they were plagued with financial troubles, the couple enjoyed their life. However, their relationship did not last long as Marander gave up on him because of his drug addiction.
In 1990, Cobain got involved with a rocker named Courtney Love whom he met during a show at a nightclub in Oregon, Portland. In February 1992, the two got married, while Courtney Love was working as a lead singer and guitarist with ‘Hole.’
Their daughter Frances Bean Cobain was born on August 18, 1992. Due to Cobain and Love’s heroin addiction, they got involved in legal cases with the authorities. Subsequently, child-welfare agents took away their custody of their baby daughter. After months of negotiations, the couple finally got full custody of their daughter.
While on a family tour in Europe on March 4, 1994, he attempted suicide by overdosing on drugs but escaped death. Post this incident, Cobain became a loner with suicidal instincts.
Cobain went to the ‘Exodus Recovery Center’ in Los Angeles, California on March 30, 1994, for a detox program. The following night, he crossed the fence of the rehabilitation center and flew back to Seattle and kept roaming around the city for the next few days. His friends and family members were unaware of his whereabouts. On April 8, his dead body was discovered at his Lake Washington Boulevard home by an electrician. According to the coroner's report, he died on April 5, 1994. He was only 27.
A final ceremony in his honor was held by his mother on 31 May 1999, which was attended by Marander and Courtney Love. His ashes was then scattered into the McLane Creek stream by his daughter Frances in a Buddhist ceremony.

He is a well-known member of the ‘27 Club,’ a list of musicians and actors who died at the age of 27. Numerous books, documentaries, and films, based on Cobain’s life and death, were released after his death. 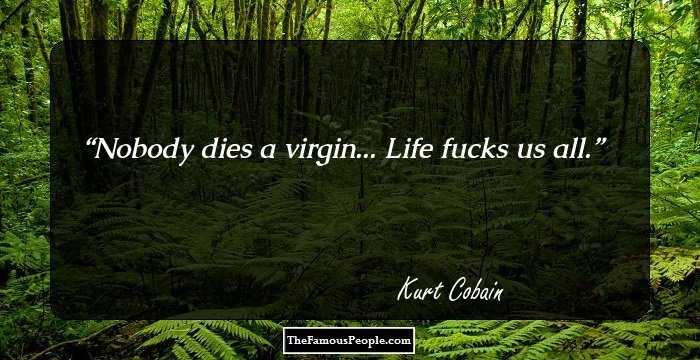 Quotes By Kurt Cobain | Quote Of The Day | Top 100 Quotes

See the events in life of Kurt Cobain in Chronological Order