Sir Christopher Frank Carandini Lee was a famous English actor and singer. He was best known for his work in horror films produced by Hammer Studios. He collaborated on Star Wars with his good friend Peter Cushing who played Grand Moff Tarkin. He himself portrayed Count Dooku, a character with superhuman powers. Christopher Lee appeared as the primary villain Francisco Scaramanga in the James Bond film The Man with the Golden Gun. He also worked with George Lucas on Lucas’s 1992 television series The Young Indiana Jones Chronicles in which he portrayed Count Ottokar Graf Czerin in an episode titled Austria, March 1917. Sir Christopher played Saruman in the Lord of the Rings trilogy, which won him high accolades. He also tried his hand at music and came up with his CD Revelation. He also worked with the Italian power metal band Rhapsody of Fire, singing few of their songs along with the band’s lead singer. Christopher Lee was honored with the Spirit of Metal award at the 2010 Metal Hammer Golden Gods Awards. Cause of Death: Respiratory Problems

His parents separated when he was quite young, and his mother took him and his sister to Switzerland.

He was enrolled at Miss Fisher’s Academy in Wengen where he played his first villainous role as Rumpelstiltskin. Soon, the family returned to London and he was admitted in Summer Field’s School, a preparatory school in Oxford. Afterwards, he received a scholarship to attend Eton College and Wellington College, where he was a classical scholar in ancient Greek and Latin. 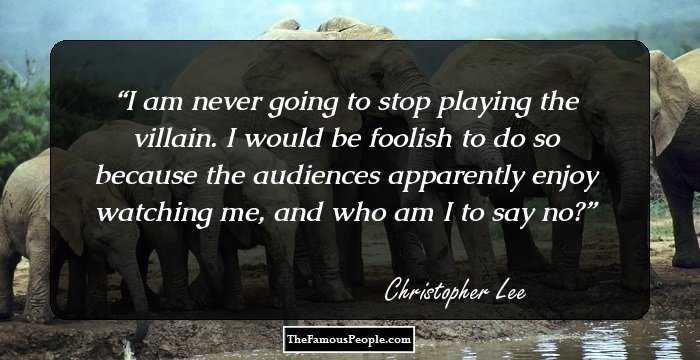 In 1939, he enlisted in the Royal Air Force during Second World War from where he retired later with the rank of Flight Lieutenant. He also served as an intelligence officer with the Long Range Desert Group in Northern Africa and in the Special Forces.

After the war ended, he was admitted to Central Registry of War Criminals and Security Suspects and was assigned the task of tracking down Nazi war criminals.

In 1947, he entered the film industry and earned a seven-year contract with Rank Organization. He got enrolled at an acting school for Rank Organization where aspiring actors were being groomed for stardom. Soon, he made his film debut in Terence Young’s Corridors of Mirrors, a gothic romance.

1952 proved to be a turning point in his career as Douglas Fairbanks Jr. started making films at the British National Studios. In the same year, he appeared in John Huston’s Moulin Rouge, which was later nominated for Oscars.

In 1959, he starred in Hammer’s The Mummy and then portrayed the eponymous character in Rasputin, the Mad Monk. In the same year, he also played the role of Sir Henry Baskerville in The Hound of the Baskervilles.

In 1962, he appeared in Sherlock Holmes and the Deadly Necklace. He then played the leading role in a German film titled The Puzzle of the Red Orchid.

Some of the other films in which he appeared during this time period include The Creeping Flesh (1972), The Wicker Man (1973), and two German films namely Count Dracula and The Torture Chamber of Dr. Sadism. He also worked in few European movies, including Castle of the Living Dead and Horror Express.

In 1974, he was cast as the villain Francisco Scaramanga in James Bond’s film The Man with the Golden Gun.

In 1977, he left for America and did a number of films, including The Return of Captain Invincible (1983) and Howling II: Your Sister Is a Werewolf (1985). He appeared as Sherlock Holmes in Incident at Victoria Falls (1991) and Sherlock Holmes and the Leading Lady (1991).

In 1994, he starred as a Russian commander in Police Academy: Mission to Moscow.

In 1998, he played the role of Muhammad Ali Jinnah, the founder of Pakistan, in the film Jinnah. The film received an overwhelmingly positive response in Pakistan and he confessed that Jinnah was the favorite role of his career thus far.

He did many television roles, including the role of Flay in the BBC mini-series Gormenghast (2000). He then played Stephen Wyszynski in the CBS mini-series John Paul II (2005).

In 2011, he appeared in Hammer’s film The Resident alongside Hillary Swank and Jeffrey Dean Morgan. The film received negative response from the critics. In the same year, he also appeared in the critically acclaimed Hugo, which was directed by Martin Scorsese.]

He voiced many characters, including King Haggard in The Last Unicorn, and Thor in the Danish film Valhalla. He also provided his voice for the English dub of Monsieur Hulot’s Holiday and in the animated versions of Soul Music and Wyrd Sisters.

He provided his voice for many video games as well, including Kingdom Hearts II, Kingdom Hearts 352/2 Days, The Lord of the Rings: The Battle for Middle-earth, and Golden Eye: Rouge Agent.

In 2013, he narrated a documentary titled Necessary Evil: Super-Villains of DC Comics.

The following year, he was seen in an episode of Timeshift called How to Be Sherlock Holmes: The Many Faces of a Master Detective.

His posthumous releases include Angels in Notting Hill, in which he had voiced God / Mr. President. He also narrated a short film titled The Hunting of the Snark, which released in 2017. 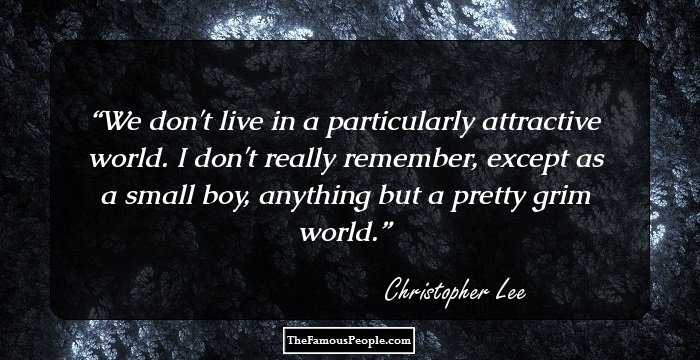 In 1957, he landed the role of Frankenstein’s monster in Hammer’s The Curse of Frankenstein. Thereafter, he appeared as the Transylvanian vampire in Hammer’s Dracula, which was inspired by Bram Stoker’s novel of the same name. It was a critical and commercial success.

In 1965, he reprised his role as Dracula in Hammer’s second installment of the Dracula series titled Dracula: Prince of Darkness, which was well received by the critics. Furthermore, he starred in Dracula Has Risen from the Grave (1968), Taste the Blood of Dracula (1969), and Scars of Dracula (1970), all of which were commercially successful.

Christopher Lee introduced Dennis Wheatley, an occult novelist, to Hammer, who made a movie based on his novel, starring Lee. This movie was titled The Devil Rides Out (1967) and is considered to be Hammer’s greatest achievement.

From 2001 to 2003, he appeared as Saruman in the fantasy adventure film trilogy The Lord of the Rings. Directed by Peter Jackson, the trilogy was based on J.R.R. Tolkien’s novel. It was considered to be one of the biggest and most ambitious film projects ever, and proved to be a turning point in his career.

Christopher Lee appeared in several films alongside Tim Burton, which catapulted him to fame. These films were Corpse Bride (2005) and Charlie and the Chocolate Factory (2005). In 2007, he collaborated with Burton for Sweeney Todd: The Demon Barber of Fleet Street. 2010 marked his fourth collaboration with Burton as they worked in the film adaptation of Lewis Carroll’s classic book Alice in Wonderland. 2012 saw his fifth collaboration with Burton as they worked in Dark Shadows, which was an adaptation of a Gothic soap opera.

On March 15, 2010, he released his first metal album titled Charlemagne: By the Sword and the Cross.

On May 27, 2012, he announced the release of his new single Let Legend Mark Me as the King from his upcoming album Charlemagne: The Omens of Death. In the same year, he released an EP called A Heavy Metal Christmas.

In 1984, Christopher Lee won International Fantasy Film Award for his contribution to the fantasy film genre.

In 2011, he was presented with the BAFTA Academy Fellowship by Tim Burton. In the same year, he was honored by the University College Dublin. He was also honored with Bram Stoker’s gold medal by the philosophical society of Trinity College. The government of France made him commander of the order of arts and letters. 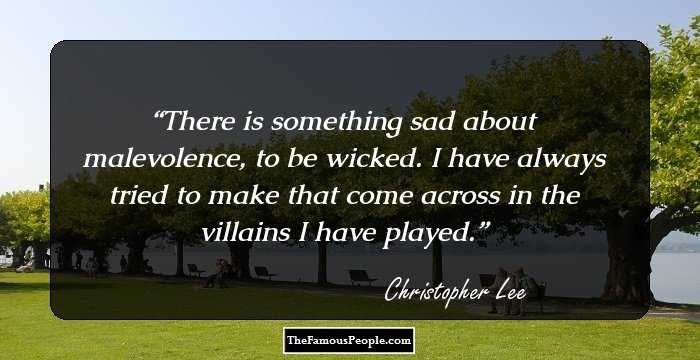 Christopher Lee died of respiratory problems and heart failure on June 7, 2015, at the age of 93.

He appeared on the album cover of Band on the Run, which was performed by Paul McCartney’s band Wings.

Quotes By Christopher Lee | Quote Of The Day | Top 100 Quotes

See the events in life of Christopher Lee in Chronological Order