(English Actor Best Known for His Films: 'Schindler's List', and 'The English Patient' )

Ralph Nathaniel Twisleton-Wykeham-Fiennes, popularly known as Ralph Fiennes, is an English stage and film actor. He is well-known in the British theatre circle for his love for Shakespearean dramas and enactment of characters like ‘Hamlet,’ ‘Coriolanus,’ ‘Richard II,’ etc. He made his directorial debut with ‘Coriolanus,’ yet again exhibiting his love for literary characters, especially that of Shakespeare’s. Fiennes started off his acting career in London, and was associated with theatres like ‘Open Air Theatre’ and ‘National Theatre.’ He ventured into movies with his dark and dense characterization of Bronte’s ‘Heathcliff’ in ‘Wuthering Heights.’ Although the movie did fairly well, it could not get him the international fame that he deserved. However, Spielberg’s Jewish massacre drama ‘Schindler’s List’ forced the filmmakers across the world to take notice. His memorable portrayal of the devilishly desensitized ‘Amon Goth’ earned him international acclaim as well as many prestigious awards, including ‘BAFTA’ and ‘Golden Globe.’ Fiennes is an accomplished actor who has played a variety of roles in genres like thriller, drama, animation, romantic-comedy, etc. British People
T V & Movie Producers
Theater Personalities
British Men
Royal Academy Of Dramatic Art
Childhood & Early Life
Ralph Fiennes was born on 22 December 1962, in Ipswich, England, to Mark Fiennes and Jennifer Lash. His father was a farmer and photographer and his mother was a writer. He has five siblings who are all part of the entertainment industry.
Fiennes attended ‘St. Kieran’s College,’ later transferring to ‘Newtown School’ in County Waterford. His family moved to Salisbury where he finished his schooling at ‘Bishop Wordsworth’s School.’ He then went to ‘Chelsea College of Art’ to pursue painting before deciding that he wanted to become an actor. 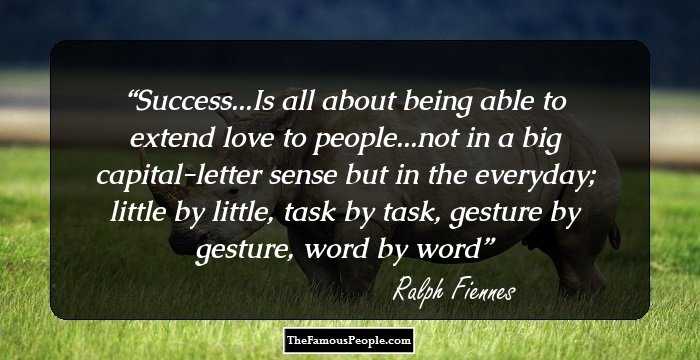 Quotes: Love
Continue Reading Below
Career
Fiennes attended ‘Royal Academy of Dramatic Art’ from 1983 to 1985. Soon after, he started his stage career, performing at ‘Open Air Theatre,’ ‘Regent’s Park,’ and ‘National Theatre.’
He started his film career in 1992 by playing ‘Heathcliff’ in the movie version of Emily Bronte’s ‘Wuthering Heights.’ In the following year, he got an opportunity to play a controversial role in Peter Greenaway’s ‘The Baby of Macon.’
In 1993, Fiennes portrayed the most memorable and crucial role of his life. He played ‘Amon Goth’ in Steven Spielberg’s movie ‘Schindler’s List’ which was based on the mass murder of the Jews by the Nazis.
He gave another fine performance in the ‘World War II’ epic romance ‘The English Patient’ in 1996. He starred in the lead role in the movie along with Kirstin Scott-Thomas, and was nominated for an ‘Oscar.’
Throughout the late-1990s, Fiennes did movies like ‘Oscar and Lucinda’ (1997); film version of the television series ‘The Avengers’ (1998); he voiced the character of ‘Ramesses II’ in the animated musical ‘The Prince of Egypt’ (1998).
In 1999, he acted in a drama movie titled ‘Sunshine,’ which fetched him a ‘European Film Award.’ ‘Onegin’ also released in the same year; the movie was directed by his sister Martha. He co-produced the movie besides acting in it.
Fiennes went back to the stage in 2000, becoming part of William Shakespeare’s ‘Coriolanus’ and ‘Richard II.’ He also made television appearance in a documentary drama titled ‘How Proust Can Change Your Life’ which was based on the life of acclaimed writer Proust.
In 2002, he starred in David Cronenberg’s award-winning thriller ‘Spider.’ He also starred as ‘Chris Marshall’ in a romantic comedy titled ‘Maid in Manhattan.’
Fiennes starred as the lead villain ‘Lord Voldemort’ in ‘Harry Potter and the Goblet of Fire’ in 2005. He also appeared in the sequels, ‘Harry Potter and the Order of the Phoenix’ and ‘Harry Potter and the Deathly Hallows – Part 1 and Part 2.’
Continue Reading Below
In the same year, he starred in the movie version of John le Carre’s novel ‘The Constant Gardener.’ It was filmed in the slums of Kibera. Disturbed by the poor living conditions of the people of Kibera, the crew started ‘The Constant Gardener Trust’ to provide basic education in the area.
Throughout the 2000s, he did movies like ‘Faith Healer’ (2006) which earned him a ‘Tony Award’ nomination. ‘In Bruges’ (2008) won him a ‘British Independent Film Award,’ and ‘The Duchess’ (2008) earned him a ‘Golden Globe.’
He appeared in the Academy Award-winning movie ‘The Hurt Locker’ (2008). In 2011, he made his directorial debut with ‘Coriolanus,’ and then appeared in ‘Skyfall’ (2012).
In the 2013 film ‘The Invisible Woman,’ he played the lead apart from directing the film. Fiennes starred in Luca Guadagnino's thriller ‘A Bigger Splash’ in 2015.
He voiced ‘Raiden the Moon King’ in the 2016 animated film ‘Kubo and the Two Strings.’ In the following year, he also voiced the British butler ‘Alfred Pennyworth’ in ‘The Lego Batman Movie.’ He reprised his role as ‘Alfred Pennyworth’ in ‘The Lego Movie 2: The Second Part’ in 2019.
Major Works
Fiennes’ best role is considered to be his impeccable characterization of ‘Amon Goth’ in Steven Spielberg’s Jewish massacre drama ‘Schindler’s List’ in 1993. It is this role that made the filmmakers all over the world to take notice of him.
Awards & Achievements
He has won most of his awards for ‘Schindler’s List’—‘BAFTA,’ ‘Boston Society of Film Critics Award,’ ‘Chicago Film Critics Association Award,’ ‘Dallas-Fort Worth Film Critics Association Award,’ ‘London Film Critics Circle Award,’ etc.
Other accolades include: ‘Evening Standards British Film Award’ (The Constant Gardener), ‘Tony’ (Hamlet), ‘Gotham Independent Film Award’ (The Hurt Locker), ‘People’s Choice’ and ‘San Diego Film Critics Society Award’ (Harry Potter and the Deathly Hallows – 2), ‘The James Joyce Award,’ etc.
Personal Life & Legacy
Fiennes married English actor Alex Kingston in 1993 after dating her for 10 years. They both were students at the ‘Royal Academy of Dramatic Art’ where they met. The couple got divorced in 1997.
He started an affair with another English actor Francesca Annis in 1995, after meeting her while working on one of his Shakespearean plays, ‘Hamlet.’ The couple dated for 11 years and broke up in 2006.
Fiennes was granted Serbian citizenship on 7 September 2017.
Trivia
This British film star is a ‘UNICEF’ UK ambassador, and has worked in places like India, Kyrgyzstan, Uganda, and Romania.
He is the eighth cousin of the Prince of Wales, and the third cousin of adventurer Ranulph Fiennes and author William Fiennes.
His siblings are Joseph Fiennes, Martha Fiennes, Magnus Fiennes, Sophie Fiennes, and Jacob Fiennes.

See the events in life of Ralph Fiennes in Chronological Order