Advanced Search
Christopher Eric Hitchens was a world famous British-American journalist, columnist, author and essayist. He was born and brought up in England and had an army background. He went to Balliol College, Oxford, and there his interest in politics, religion and culture evolved. He joined the Labour Party very early in his life and subscribed to the leftist political view. He worked for the New Statesman for some time in England and flew to America early in his journalistic career as a part of the foreign editor exchange program with The Nation. He worked there as a foreign editor and also took up the role of a contributing editor at the Vanity Fair. He wrote 12 books that portrays his aggressive and assertive views on the relevant international figures and events of his time like Mother Teresa, Lady Diana, George Bush, Royal Family, Iraq War etc. He also wrote many essays, columns and a memoir called ‘Hitch-22’ in which he has included his personal journey and experience in Journalism and politics. He was awarded with National Magazine Award for his brilliant contribution to the world of writing through his columns in Vanity Fair. Hitchens died at the age of 62 after struggling with esophagus cancer, which is thought to be the probable result of his heavy drinking and smoking throughout his life. Piers Morgan
13th April In History
DID WE MISS SOMEONE?
CLICK HERE AND TELL US
WE'LL MAKE SURE
THEY'RE HERE A.S.A.P
Quick Facts

American Celebrities
British Celebrities
Journalists
Newspaper Columnists
American Men
British Men
Childhood & Early Life
Christopher Hitchens was born on 13th April 1949 in Portsmouth, England to Eric and Yvonne Hitchens. His father was in the British Royal Navy because of which the whole family had to constantly move.
Against his father’s initial will, Hitchens’ mother sent him to Mount House4 School in Tavistock, Devon because his mother wanted him to get education in the upper middle class environment.
Other schools that Hitchens was educated in were Leys School in Cambridge and Balliol College in Oxford. At Oxford he did his major in philosophy, politics and economics.
In 1960, due to his rage over the Vietnam War and the usage of nuclear weapons, rising racism in the west and oligarchy, Hitchens joined politics. He became an active part of the political protests and countercultural movements.
In 1965, Hitchens joined the Labour Party and it was around this time that he formed an interest in Trotskyist and anti-Stalinist socialism through the translated work of Russian revolutionary called Victor Serge. 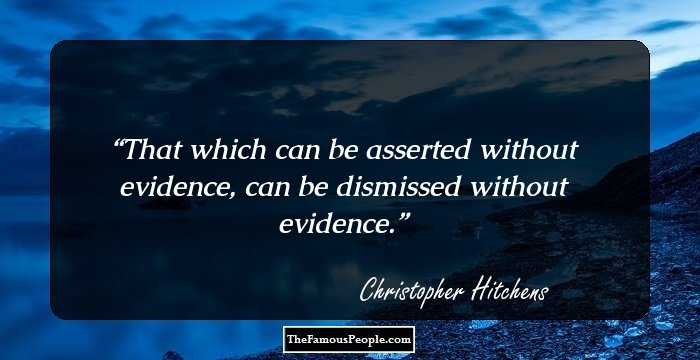 Balliol College, Oxford
Aries Writers
Male Writers
Male Novelists
Career
While still studying at Oxford, Hitchens worked as a correspondent for ‘International Socialism’ which was creatively controlled and published by a set of International Socialists.
In 1971, after graduating from Oxford, he worked as a social science correspondent at the Times Higher Education Supplement, but he was soon fired from there and joined ITV’s Weekend World as a researcher.
In 1973, he joined the New Statesman as a journalist and soon became famous for his aggressive left-winged political views. He met important literary people like Ian McEwan, Martin Amis, etc.
In 1981, while still at the New Statesman, Hitchens went to the Sates under an editor exchange program between his firm and The Nation. He worked there for some time and wrote critical views on American foreign policy, George H. W. Bush, etc.
In 1988, after breaking off the leftist political stance because of the death threats that his writer friend Salman Rushdie was receiving on publishing ‘The Satanic Verses’, Hitchens released his book ‘The Monarchy: A Critique of Britain’s Favorite Fetish’.
In 1992, while still working officially at The Nation, Hitchens started contributing his work to the Vanity Fair and became a contributing Editor of the magazine. He left The Nation after working there for almost 19 years.
In the later 90s, Hitchens started writing and producing the best work of his career in the form of essays, books and journalistic articles. His usual point of discussion in his work was how some of the public figures were raised to the level of gods.
Around same time, he published ‘The Missionary Position: Mother Teresa in Theory and Practice’ in which he tainted the unblemished reputation of Mother Teresa claiming that she supported the dictators.
In 1999, he published the book ‘No One Left to Lie To: The Triangulations of William Jefferson Clinton’. It was a critique on the beloved figure of the west, Bill Clinton and his wrongdoings, which infuriated the left.
Continue Reading Below
In 2000s, he got the citizenship of the U. S and became a media fellow at the Hovver Institution. He appeared on talk shows like ‘Frontiers’ and ‘Charlie Rose’ and presented his assertive opinions on politics.
In 2000s, he wrote and published ‘Why Orwell Matters’, ‘Thomas Jefferson: Author of America’, ‘Thomas Paine’s Rights of Man: A Biography’. He wrote the essay ‘A Long Short War: The Postponed Liberation of Iraq’, supporting military action in Iraq.
In 2007, he came out with his work called ‘God Is Not Great: How Religion Poisons Everything’, in which he criticized the existence of all the religions in the modern society. The book established him as an atheist
In 2007, Hitchens won the National Magazine Award for the category of ‘Columns and Commentary’ for his work for Vanity Fair. Around same time he won the National Magazine Award for Columns on Cancer.
In 2010, his book ‘Hitch-22’ was published, which was a memoir by him. He took a book tour for its publicity and made an announcement during the same that he had an esophageal cancer. He continued the tour.
In 2011, a collection of his sharp one-liners were published called the ‘The Quotable Hitchens: From Alcohol to Zionism’. Another book of his, a collection of critical and political essays, called ‘Arguably: Essays’ was published. 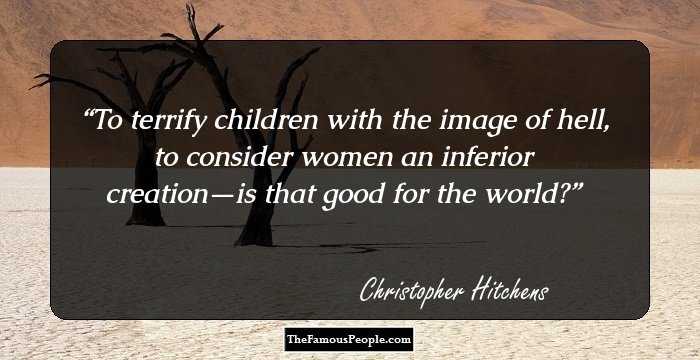 British Writers
American Writers
Male Journalists
British Novelists
Personal Life & Legacy
In 1973, his mother committed suicide with her secret lover and a former clergyman called Timothy Bryan by taking overdose of sleeping tablets and slashing their wrists in Athens. Hitchens thought that his mother was pressurized into it.
In 1984, he got married to Eleni Meleagrou who was a Greek Cypriot. He met with her on his regular trips to Cyprus, during the early period of his journalistic career. He had two children with her - Alexander and Sophia.
Continue Reading Below
In 1991, Hitchens got married to his second wife Carol Blue. He met her for the first time at the LA airport and it was described by him as the ‘love at first sight’. Blue was a Californian screenwriter. They had a daughter named Antonia.
In 2011, Hitchens died after struggling with esophagus cancer at the University of Texas MD Anderson Cancer Center, Houston. His body was donated to medical research, something he had always wished for.
Recommended Lists:

American Novelists
British Journalists
American Journalists
Male Media Personalities
Trivia
His last words, right before his death, were ‘Capitalism downfall’.
His second wedding ceremony took place at the house of the editor of The Nation.
He was very sentimental about his mother’s suicide and found it an emotionally hard process to write about her in his memoir ‘Hitch-22’.
His relationship with his younger brother, Peter Hitchens, who is also a journalist, went through a bit of turmoil when Hitchens called him ‘an idiot’ publically. They reconciled after Hitchens’ nephew was born.
Hitchens was known to be an avid smoker and drinker, a lifestyle that he claimed to as Bohemian and helped him to remain creative.
His wife Carol Blue accepted the LennonOno Grant for Peace on his behalf after his death in 2012.
Many great leaders and creative figures wrote eulogies after Hitchens’ death. It included Salman Rushdie, Tony Blair, Francis Collins, Martin Amis, Sam Harris, Richards Dawkins, etc. 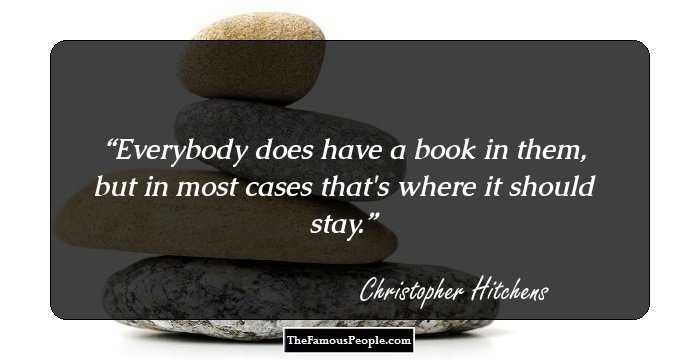 Quotes By Christopher Hitchens | Quote Of The Day | Top 100 Quotes

See the events in life of Christopher Hitchens in Chronological Order