Ludovico Ariosto was a well-known neo Latin poet born in the fifteenth century Italy. He is especially remembered for his epic poem ‘Orlando Furioso’, which is considered to be the finest example of literature of that period. Although he was initially forced to study law Ariosto’s first love had always been literature and he showed inclination towards poetry early in his life. He was a man of simple taste and would have been happy leading a simple life devoted to literature. However, sudden death of his father forced him to take up position in Cardinal Ippolito d’Este’s household. His life there was certainly at odds with his simple nature; yet he found time to compose literary pieces like ‘La Cassaria’ and ‘Orlando Furioso’. He continued the pursuit even when he was working as a diplomat and later as governor. Unlike his predecessors, Ariosto’s works emphasized more on the strength of human being rather than gods. He also coined the term ‘humanism’ and emphasized the value of human beings. However, he was not an atheist; but was a great believer of providence. His famous quotes ‘For rarely man escapes his destiny’ and ‘Man proposes God disposes’ are equally popular in modern time.
Continue Reading Below Italian People
University Of Ferrara
Virgo Poets
Male Poets
Male Writers
Childhood & Early Years
Ludovico Ariosto was born on September 8, 1474 in the ancient town Reggio nell’Emilia, located in northern part of Italy. His father’s name was Count Niccolo Ariosto; but the name of his mother is not known. Ludovico had four brothers and five sisters younger to him.
At the time of Ludovico’s birth, Count Niccollo was the commander of the citadel at Reggio nell’Emilia. However, in and around 1484, the family moved to Ferrara, their native place. From then on, Ludovico began to consider himself as a Ferrarese.
As a child, Ludovico showed an inclination towards literature. However, because he was the eldest child it was necessary that he be trained in professional line. On his father’s insistence Ludovico studied law from 1483 to 1494. He was allowed to study literature only after he had completed legal studies.
From 1495, Ariosto began to study Greek and Latin literature under Gregorio da Spoleto. However, in 1500, Spoleto left Ferrara for a more lucrative position in France. Count Niccollo too died shortly and so Ludovico was compelled to forgo his literary ambition. 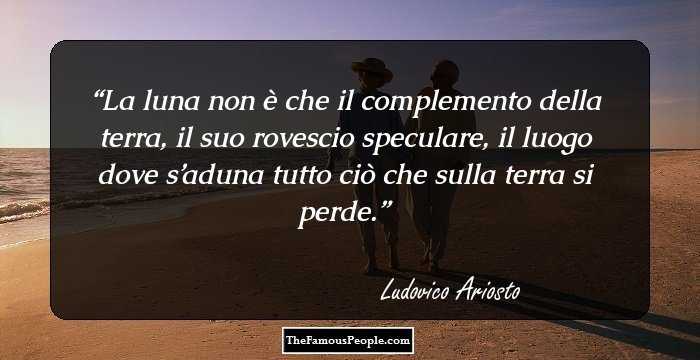 The Hottest Male Celebrities With The Best Abs
Career
On his father’s death Ludovico Ariosto found his family affairs to be in disorder. In 1502, he acquired the position of the commander of the Fort of Canossa. It is not exactly known what he did in the intervening years.
However, it is certain that he wrote a few comedies in prose as well as few poems during this period. It is believed that Cardinal Ippolito d’Este took Ariosto under his patronage when he came across some of these poems.
In 1503, Ariosto took position of the Gentleman of the Household under the Cardinal. He was expected to be in constant attendance of the Cardinal and work as a messenger for him. He was also required to accompany him when he went out on expeditions such as the Venice Expedition of 1509.
This type of work did not suit Ariosto’s temperament at all. Moreover, the cardinal paid him only 84 crowns a year. Neither did he appreciate Ariosto’s literary venture. Yet, he kept on working for him out of compulsion.
By and by, Ariosto gained recognition as a diplomat. He was sent to Rome as ambassador twice; first in 1512 during the time of Pope Julius II and then again in 1513 when Leo X became the pope.
In 1517, the Cardinal was created the Bishop of Buda, Hungary. He expected Ariosto to accompany him. However, Ariosto was not ready to leave Ferrara and so he tried to excuse himself. This angered the Cardinal and consequently, Ariosto lost the position.
However, Ariosto found another patroness in Marchioness Isabella d’Este, the Cardinal’s elder sister, who was one of the leading ladies of Renaissance. Besides their brother, Alfanso, Duke of Ferrara, also liked him well and in 1518, he offered him a position under him.
In 1522, Ariosto was sent to Garfagnana in central Italy as the governor of the region. It was located in the wildest part of Apuan Alps and was infested with bandits. Although he did not get much support from the duke, he managed to satisfy both the inhabitants and the master.
In 1525, Ariosto came back to Ferrara. By now, he had saved enough money to buy a house with a garden. He spent his last days in this house attending the garden and pursuing his literary career. 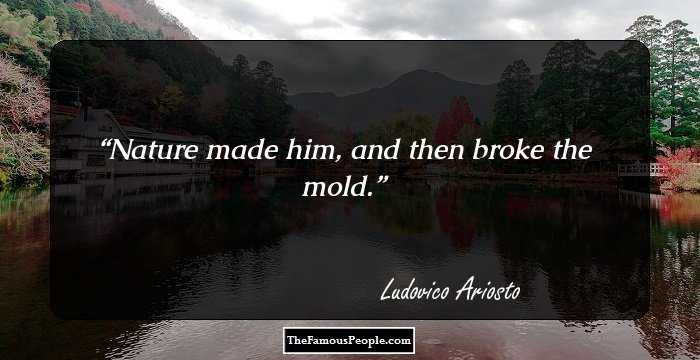 Quotes: Nature
Literary Works
In spite of his busy schedule, Ludovico Ariosto managed to create a huge corpus of literary treasure. These poems were initially inspired by Roman poets like Tibullus and Horace; but later he developed a style of his own. In fact, he was one of the poets, who led to the development of the literary culture during the Renaissance.
Out of all his works, Ariosto is best remembered for his epic poem ‘Orlando Furioso’. It is a continuation of Matteo Maria Boiardo's ‘Orlando Innamorato’ and has been composed in ‘ottava rima’ rhyme. It consists of 38,736 lines and is divided into 46 cantons.
Ariosto started working on this epic poem in 1505/ 1506. It was first published in 1516. At that time it had 40 cantons. However, he kept on improving on it throughout his life and the final version, which had 46 cantons, was published in 1532.
Ariosto also wrote seven satires and five comedies. Major among them are: ‘La Cassaria’ (1508), ‘Il suppositi’ (1509), ‘Gli studenti’ (1518-1519), ‘II negromante’ (1521), and ‘La Lena’(1528). The last one is said to be the inspiration behind Shakespeare’s ‘Taming of the Shrew’.
Personal Life
Ludovico Ariosto met his future wife Alessandra Benucci in 1513. At that time she was married to Tito Strozzi. After Strozzi’s death, Alessandra became Ariosto’s mistress. The couple finally got married sometime between 1528 and 1530 in a secret ceremony. They did not have any children.
Ariosto died on July 6, 1533, months after he completed the final version of his epic poem ‘Orlando Furioso’.
You May Like

See the events in life of Ludovico Ariosto in Chronological Order