Known for his trademark black humour and satire, Chris Morris is one of the most recognized and controversial political satirists in the United Kingdom. Multi-talented and immensely successful, this producer, actor, voice actor, director, radio personality and television anchor has proved himself to be versatile in the entertainment industry time and again. His enigmatic figure coupled with comic style has made him a remarkable influence in the country. Morris has scintillated audiences with his unique sense of satirical comedy, which has resulted in the creation of countless cult followers. Raised in a Victorian farmhouse in Buckden, Morris began his career with local British radio stations. However, prior to this, he also tried his hand at music, working with several bands. His shows ‘The Day Today’ and ‘Brass Eye’, not only captivated audiences, but generated a huge response from common masses and political personalities. Similarly, his satirical radio show, ‘On the Hour’, has an identical effect on his listeners and audiences in the United Kingdom. British People
Radio Personalities
British Men
University Of Bristol
Tall Celebrities
Childhood & Early Life
Christopher Morris was born to Michael Morris and Rosemary Morris in Bristol, England. He was raised for most part of his life in a Victorian farmhouse in Buckden, Huntingdonshire.
He attended the Stonyhurst College, a Jesuit boarding school from the time he turned ten. He later studied zoology at the University of Bristol, United Kingdom. 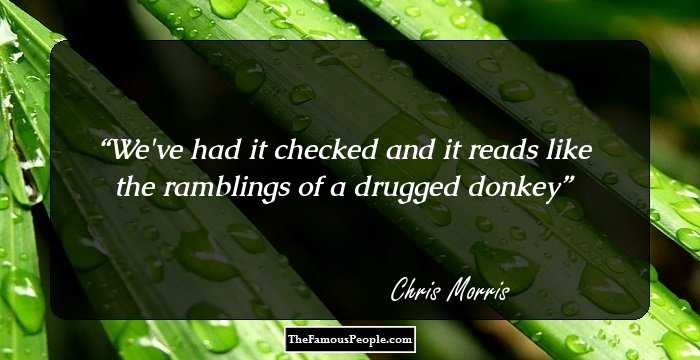 The Best Black Actresses Of All Time
Career
In 1986, he began his career as a news trainee with the BBC Radio Cambridgeshire. The following year, he began to host the afternoon show and soon was given the Saturday morning show as well.
In July 1987, he quit BBC Radio Cambridgeshire and joined the BBC Radio Bristol, where he hosted his own show titled, ‘No Known Cure’. The show was aired on weekend mornings.
In 1988, he worked with the Greater London Radio, for which he hosted ‘The Chris Morris Show’ until the year 1993. He was later fired by the radio station after the broadcast of a controversial sketch.
In 1991, he became the anchor of the radio show titled, ‘On the Hour’, which was broadcast on BBC Radio 4. The show was a parody and a spoof of news and current affairs. It received huge response and recognition.
In 1994, he hosted the ‘Chris Morris Music Show’, which was aired on BBC Radio 1. The same year he collaborated with Peter Cook for the BBC Radio 3 project titled, ‘Why Brother’.
In January 1994, along with Armando Lannucci he created the TV parody on current affairs programmes titled, ‘The Day Today’. The show was broadcast on BBC2.
In 1997, he gained recognition with Channel 4’s ‘Brass Eye’ - a spoof and mock of news programmes. The series was also written by him.
Later in 1997, he created and directed the radio comedy show titled, ‘Blue Jam’, which was aired on BBC Radio 1. The show was aired in the early mornings and ran until the year 1999.
In 1999, he worked as an additional director and voice actor for the BBC 2 comedy sketch show, titled, ‘Big Train’. The show was created by Arthur Mathews and Graham Linehan.
Continue Reading Below
Later in 1999, he authored a series of spoof columns under the title, ‘Second Class Male’ and ‘Time To Go’ for the newspaper, The Observer. He used the pen name Richard Geefe, in these coloumns.
In 2000, he directed, created and wrote the British dark comedy series titled, ‘Jam’, which was broadcast on Channel 4 in the month of April. This show was inspired by his earlier show, ‘Blue Jam’.
In 2002, he directed and wrote the short film titled, ‘My Wrongs #8245–8249 & 117’, which was his debut effort in films. This film was made after his earlier show, ‘Blue Jam’.
In 2005, he was the writer, director and performer in the Channel 4 sitcom titled, ‘Nathan Barley’. The series was broadcast from the month of February and the show had a total of six episodes per week.
In 2006, he performed for the Channel 4 sitcom titled, ‘The IT Crowd’, which was one of the successful British sitcoms. The show revolved around the employees of an IT company.
In 2009, he edited the script of the comedy series titled, ‘Stewart Lee's Comedy Vehicle’, which was well received by audiences. The show was broadcast on BBC2.
In 2010, he directed the feature film titled, ‘Four Lions’, which was a satirical on the concept of jihad. The plot was centred around young British Muslim men.
In 2012, he directed one episode of the television series, ‘Veep’, which was a HBO TV comedy and political satire show, created by Armando Iannucci.
Major Works
He anchored the show, ‘On the Hour’, which received the British Comedy Award in 1992 for the category of ‘Best Radio Comedy’. The show also won the Writers’ Guild of Great Britain Award in the category of ‘Comedy/Light Entertainment’.
His short film, ‘My Wrongs #8245–8249 & 117’, a critically acclaimed film, received the BAFTA Award in the year 2003 in the category of ‘Best Short Film’.
Awards & Achievements
In 1994, he was the recipient of the British Comedy Award for the category of Best TV Comedy Newcomer for ‘The Day Today’.
In 2011, he received the BAFTA Film Award for the category of ‘Outstanding Debut by a British Writer, Director or Producer’ for ‘Four Lions’.
Personal Life & Legacy
He is married to Jo Unwin, with whom he has two sons. The couple live together in Brixton.
Trivia
This British radio personality, anchor, director and satirist was fired from a radio show, after he made silly noise during the broadcast of news bulletins. He also filled the news room with helium when a live news broadcast was in progress.
Recommended Lists:
Media Personalities #824
You May Like

See the events in life of Chris Morris in Chronological Order