Bear Grylls, who is renowned for his reality show ‘Man vs. Wild,’ is an adventurer, traveler, and explorer. Adventure sports, such as mountaineering, sailing, and sky diving interested him ever since he was a child. He was trained in these sports by his father who was associated with the ‘Royal Yacht Squadron.’ He was keen to learn martial arts, and earned a black belt in Shotokan karate at an early age. He even became a cub scout when he was eight years old. Adventures are accompanied with risks and demand immense physical as well as mental strength. Not surprisingly, Bear has sustained many injuries, and has even injured his spine. Apart from recovering from his physical injuries, this courageous individual has overcome his psychological hindrances as well. His determination to climb the Mount Everest remained undeterred even after sustaining severe injuries. Determined to continue his adventurous pursuits even after facing many setbacks, Bear Grylls has been proving his skeptics wrong time and again. Ever since recovering from a major injury, he has been more zealous and has also established himself as a television presenter of reality shows where he embarks on adventures. He is also a survival instructor, writer, businessman, former ‘Special Air Service’ (SAS) serviceman, and honorary lieutenant-colonel. Notable Alumni: University Of The West Of England, Bristol

education: University Of The West Of England, Bristol

Humanitarian Work: He is an ambassador of ‘The Prince’s Trust’.

British People
Reality TV Personalities
British Men
Tall Celebrities
Tall Male Celebrities
Childhood & Early Life
Bear Grylls was born Edward Michael Grylls on 7 June 1974, in London, England, to Sir Michael Grylls and Lady Sarah ‘Sally’ Grylls. His elder sister Lara Fawcett gave him his nickname ‘Bear’ when he was just a week old.
He was raised in Donaghadee, Northern Ireland. When he was four years old, his family shifted to the Bembridge village on the easternmost part of the Isle of Wight. When he was a child, he was trained to climb and sail by his father. He became a cub scout when he was eight years old.
He received education from institutions, such as ‘Ludgrove School’ and ‘Eton College.’ He initiated the establishment of a mountaineering club at ‘Eton College.’
In his youth, he was trained to skydive. He also obtained a black belt in Shotokan karate. 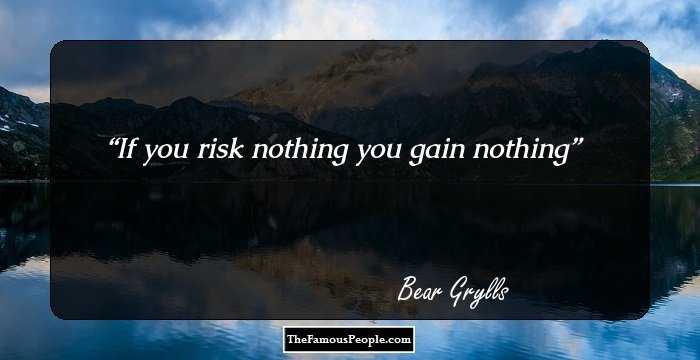 Quotes: You
Continue Reading Below
Career
He joined the ‘Territorial Army’ (Army Reserve UK) and worked at the ‘Special Air Service’ unit of the army for three years. He was a combat survival instructor and learnt demolitions, parachuting, unarmed combat, evasive driving, and trauma medic.
During this period, he met with an accident which led to a spinal injury. He underwent medication and rehabilitation in order to recover from the injury.
In 1997, he climbed Mount Ama Dablam, becoming the youngest British to achieve this feat.
He went hiking in the Himalayan Mountains of Sikkim and West Bengal, and on 16th May 1998, he climbed Mount Everest and registered his name in the ‘Guinness Book of Records.’
He went on a fund raising expedition for the ‘Royal National Lifeboat Institution’ (RNLI) and led a team on Jet Skis to circumnavigate the UK in the year 2000. This was a pioneering initiative, and the expedition took 30 days to complete.
In 2000, his first book ‘The Kid Who Climbed Everest’ was published. The book narrated his journey to the peak of the mountain. He then penned another book titled ‘Facing the Frozen Ocean.’ He has also authored books, such as ‘Born Survivor: Bear Grylls’ and ‘Bear Grylls Outdoor Adventures.’
He completed his part-time graduation in Hispanic studies from ‘Birkbeck, University of London’ in 2002. He also attended the ‘University of the West of England.’
In 2003, he went on an expedition to the north Atlantic Arctic Ocean, accompanied by a team comprising five members. They sailed from Nova Scotia to Labrador, Greenland, Iceland, and then Scotland.
This adventurer created a new record in 2005, when he organized the highest open-air formal dinner party. He organized the party along with mountaineer David Hempleman-Adams and Lieutenant Commander Alan Veal, leader of the ‘Royal Navy Freefall Parachute Display Team.’ The same year, he appeared in the television series ‘Escape to the Legion.’
Continue Reading Below
He undertook an expedition and led a team to para-motor over Angel Falls, which is the highest waterfall in the world in 2005.
In 2006, his tele-series ‘Man vs. Wild’ was launched. The show was initially titled ‘Born Survivor: Bear Grylls’ and was broadcast in the UK. Over the years, the show, which showcases how Grylls survives in some of the harshest environments, went on to become popular all over the world.
He created a new record in 2007, when he flew a parajet over the Himalayas. The following year, he was accompanied by double amputee Al Hodgson and Scotsman Freddy MacDonald when he created a ‘Guinness World Record’ for the ‘longest continuous indoor freefall.’
In the year 2009, he was made the chief scout of ‘The Scout Association’ when he was 35 years old. Thus, he became the youngest individual to hold the position of chief scout. His appointment was extended until 2020, making him the longest serving chief scout in the history.
This voyager, accompanied by a team of five, embarked on Northwest Passage expedition in a rigid-inflatable boat sailing through 2,500 miles in 2010. The same year, he appeared in a ‘Discovery’ channel show named ‘Worst-Case Scenario.’ The following year, he featured in the show ‘Bear’s Wild Weekend.’
In 2011, his book ‘Scouting For All’ was published. He also wrote a series of books under the title ‘Mission Survival.’ This series consists of books, such as ‘Mission Survival: Gold of the Gods,’ ‘Mission Survival: Way of the Wolf,’ ‘Mission Survival: Sands of the Scorpion,’ ‘Mission Survival: Tracks of the Tiger,’ and ‘Mission Survival: Claws of the Crocodile.’
The explorer inked his autobiography ‘Mud, Sweat and Tears: The Autobiography’ in the year 2012. This was followed by the publication of books, such as ‘A Survival Guide for Life’ and ‘True Grit.’
In 2013, he presented the show ‘Get Out Alive with Bear Grylls.’ The same year, a show titled ‘Bear Grylls: Escape From Hell’ premiered on TV. The following year, he hosted the show ‘The Island with Bear Grylls’ which featured 13 men in a desolate island in the Pacific.
In 2014, his show ‘Running Wild with Bear Grylls’ was launched. It featured celebrities like Tamron Hall, Zac Efron, Tom Arnold, Ben Stiller, Deion Sanders, and Channing Tatum.
Continue Reading Below
He hosted another reality show titled ‘Bear Grylls: Mission Survive’ in 2015. The show featured eight celebrities who had to perform certain tasks in order to survive in the show. The winner of the first season was DJ and model, Vogue Williams. The show was back with a new season in 2016 which was won by ‘Arsenal F.C’ player Alex Scott. The show was then canceled due to poor ratings.
He also presented the Chinese version of ‘Survivor Games’ in 2015 and ‘Bear Grylls Survivor School’ in 2016. He has since been a part of ‘Bear’s Mission With…’ which is England’s version of ‘Running Wild with Bear Grylls.’ The show had different British celebrities going on an adventure with Grylls every episode.
In 2015, Bear went on an adventure into the Alaskan Wilderness with the then US President Barack Obama. He has also journeyed through the ‘Jim Corbett National Park’ alongside Indian Prime Minister Narendra Modi for a special episode, which was aired in 2019.
Bear has also written adult fiction books which include ‘The Ghost Flight’ (2015) and ‘Burning Angels’ (2016). In 2017, he released a book titled ‘How to Stay Alive: The Ultimate Survival Guide for Any Situation.’
Bear was appointed as the first ever chief ambassador of the ‘World Organization of the Scout Movement’ (WOSM) in 2018. 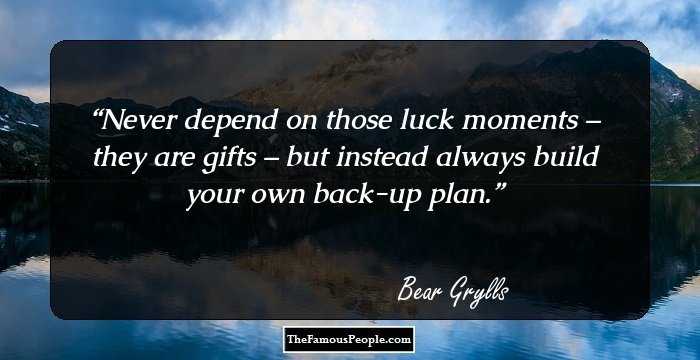 Quotes: Never
Major Works
His television show ‘Man v/s Wild’ was a huge success, and made Grylls an international figure. In the show, the adventures that he goes through are unique, and the survival strategies that he employs are bizarre. This show was launched in the UK as ‘Born Survivor: Bear Grylls.’ The show ran for five years and had seven seasons in total.
Awards & Achievements
In 2004, this adventurer was felicitated with an honorary rank of lieutenant commander in the ‘Royal Naval Reserve.’
In 2013, he was bestowed with an honorary rank of lieutenant colonel in the ‘Royal Marines Reserve.’
In 2019, Grylls was honored and appointed as ‘Officer of the Order of the British Empire’ (OBE) by the Queen of England. 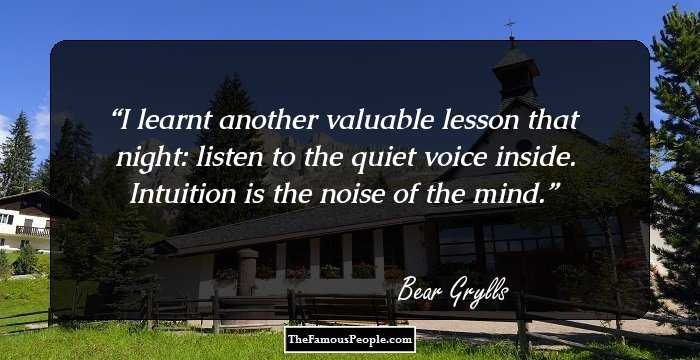 Quotes: I
Personal Life & Legacy
In the year 2000, Bear Grylls married Shara Cannings, and the couple is blessed with three children, named Marmaduke, Jesse, and Huckleberry.
He is associated with many charitable organizations like ‘The Prince’s Trust’ and ‘The JoLt Trust.’ Most of his expeditions have been aimed at raising funds for organizations, such as ‘Global Angels,’ 'The Duke of Edinburgh's Award Scheme,' 'Royal National Lifeboat Institution,' 'SSAFA Forces Help,' and 'Hope and Homes for Children.'
Trivia
He owns a franchise of the dietary supplements brand, ‘Juice Plus.’
A long-time advocate of popularizing adventure among children, Bear left his eldest son Jesse along the North Wales Coast for a practice rescue mission, which was organized by the ‘Royal National Lifeboat Institution’ (RNLI) in 2015.

Quotes By Bear Grylls | Quote Of The Day | Top 100 Quotes

See the events in life of Bear Grylls in Chronological Order