Advanced Search
Charles Koch is an American businessman and philanthropist who is the co-owner and Chief Executive Officer (CEO) of Koch Industries. Charles and his younger brother David inherited the business from their father, Fred Koch, who had founded the company in 1940. The brothers, especially Charles, played a major role in expanding the business and growing it into one of the largest privately held companies in the United States. Born as one of the four sons in an industrialist’s family, Charles was intelligent and hardworking from an early age. He was also a brilliant student who went to the Massachusetts Institute of Technology (MIT) to study engineering and earned two Master’s degrees, one each in mechanical engineering and chemical engineering. After working for a while in Arthur D. Little, Inc. after completing his studies, Charles joined his father’s business, Rock Island Oil & Refining Company. He eventually became the president of the business and renamed the firm Koch Industries in honor of his father. He also has an interest in politics and along with his brother David has made significant financial contributions to libertarian and conservative think tanks and campaigns. A generous philanthropist, he has donated millions of dollars to fund research, policy, and educational projects. Chad Hurley
DID WE MISS SOMEONE?
CLICK HERE AND TELL US
WE'LL MAKE SURE
THEY'RE HERE A.S.A.P
Quick Facts

awards: Honorary Doctor of Science
from George Mason University
for his continued support of the economics program at GMU

American People
CEOs
American Men
Massachusetts Institute Of Technology (MIT)
American CEOs
Childhood & Early Life
Charles Koch was born on November 1, 1935, in Wichita, Kansas, to Mary and Fred Chase Koch. His father was an engineer turned industrialist who later founded what was to become Koch Industries. Charles has three brothers: Frederick, David, and William.
He went to the Massachusetts Institute of Technology (MIT) to study engineering. He earned his Bachelor of Science in general engineering in 1957, and a Master of Science (M.S.) in mechanical engineering in 1958. He then completed another Master’s degree and received his M.S. in chemical engineering in 1960. 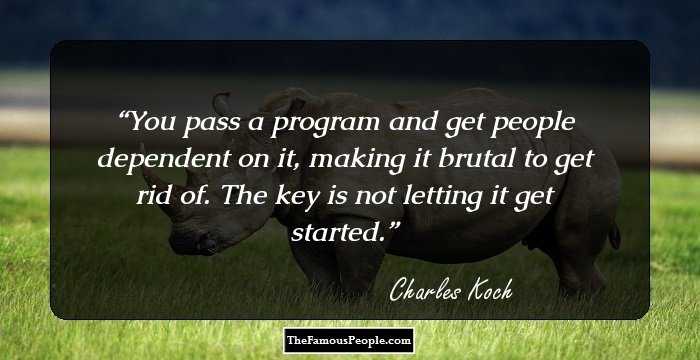 Quotes: You
Continue Reading Below
Career
After graduation he joined Arthur D. Little, Inc. However, this job lasted for a very short while as he moved back to Wichita in 1961 in order to join his father’s business, Rock Island Oil & Refining Company.
He was a hard working young man, determined to expand the family business which had become a medium sized oil firm by the late 1960s. He became the president of the business in 1967 and renamed it Koch Industries in his father’s honor. He has also been serving as the Chairman of the Board and CEO since then.
A highly competitive businessman, he worked tirelessly to grow the business which is today involved in diverse fields such as the manufacturing, refining, and distribution of petroleum, chemicals, energy, fiber, intermediates and polymers, minerals, fertilizers, pulp and paper.
He became the Director of Koch Industries in 1982 and also serves, or has served, as the Director of other corporations including Entrust Financial Corp. and Georgia-Pacific LLC, paper and pulp products.
Under the leadership of Charles Koch, the Koch Industries saw an unprecedented rate of expansion and at present has its presence in around 60 countries around the world and employs more than 100,000 people worldwide.
Over the recent years Koch Industries have invested more than $70 billion in acquisitions and other capital expenditures and own Invista, Georgia-Pacific, Molex, Flint Hills Resources, Koch Pipeline, Koch Fertilizer, Koch Minerals, and Matador Cattle Company.
Charles Koch credits his phenomenal success to the business philosophy of Market Based Management (MBM), a concept which he developed. He describes this philosophy in detail in his 2007 book, ‘The Science of Success: How Market-Based Management Built the World's Largest Private Company’.
The principles of MBM are taught to students, educators, community leaders and government officials by the Market-Based Management Institute, an educational non-profit, through their partnership with the Wichita State University (WSU).
He is a libertarian and is in favor of free-enterprise policy and advocacy organizations. He supports a number of free market-oriented educational organizations, including Cato Institute, the Institute for Humane Studies, Bill of Rights Institute, and the Mercatus Center at George Mason University.
Continue Reading Below 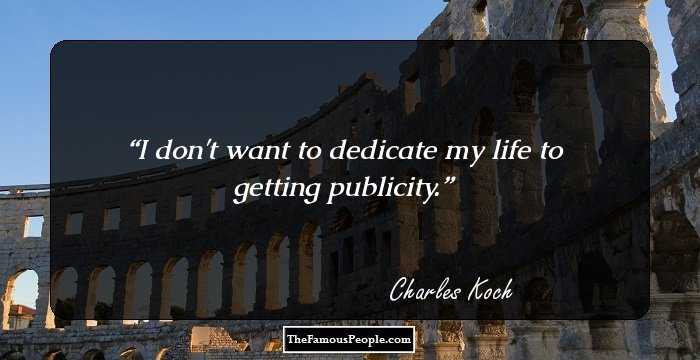 Quotes: Life
Major WorkS
As the co-owner, chairman of the board, and Chief Executive Officer (CEO) of Koch Industries, Charles Koch, has played a pivotal role in transforming the company from a medium sized firm to one of the largest privately held companies in the United States. Koch Industries is also the recipient of more than 930 awards for safety, environmental excellence, community stewardship, innovation, and customer service.
Awards & Achievements
He was presented with the Adam Smith Award by American Legislative Exchange Council in 1994.
In 1999, he won the Directors’ Award for Global Vision in Energy from the New York Mercantile Exchange.
The Heritage Foundation bestowed upon him the Spirit of Justice Award in 2003.
In 2005 he won the Herman W. Lay Memorial Award by the Association of Private Enterprise Education.
He was honored with the William E. Simon Prize for Philanthropic Leadership by Philanthropy Roundtable in 2011. 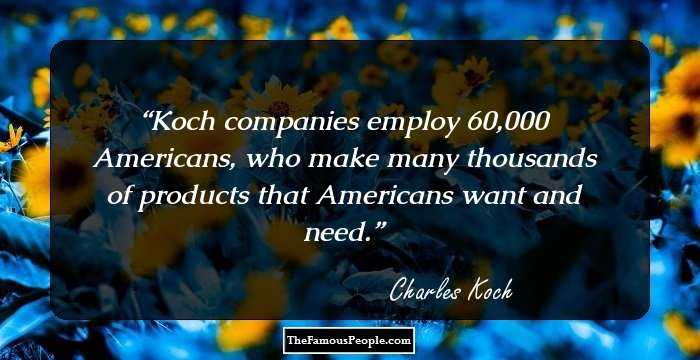 Quotes: Need
Personal Life & Legacy
Charles Koch is a very private person and likes to avoid the limelight. He is also particular about guarding the privacy of his family. He has been married to his wife Liz since 1972 and has two children. He is a prostate cancer survivor.
Philanthropic Works
He is a renowned philanthropist and focuses on funding projects in the fields of research, policy and education which are intended to advance free-market views. He has financed the research of economists like James Buchanan and Friedrich Hayek. Till date he has donated millions to the causes he believes in. Koch Industries and the Koch family foundation donated $11.25 million to the Wichita State University in 2014.

Quotes By Charles Koch | Quote Of The Day | Top 100 Quotes

See the events in life of Charles Koch in Chronological Order