(The Greatest Novelist of the Victorian Era)

One of the most widely read English authors of all time Charles Dickens is famous for his novels that touch upon the sensitive issues of poverty, child labour, and slavery. During a time, when depravity and oppression were the norms of English society, this talented writer had the courage to voice his opinions against these conditions. Gathering inspiration from his childhood experiences of poverty and insecurity, his novels are usually semi-autobiographical. This author was gifted with a powerful memory, and most of the characters in his novels are based on people he met and got acquainted with. This includes his own parents, who were the models for characters Mr. and Mrs. Micawber in the famous novel ‘David Copperfield’. The characters created by this novelist are popular because of their idiosyncrasies and quirky names. Some of his popular novels are 'Oliver Twist', 'A Christmas Carol', and 'Hard Times', amongst many more. Though known for his social commentary on the prevalent conditions in England, the literary works of novelist gained popularity amongst readers, editors and publishers alike. His books have seen more than 200 adaptations for the big screen, including 'The Pickwick Papers', a silent movie made in the early 20th century. British People
British Men
Male Writers
Male Novelists
British Writers
Childhood & Early Life
Charles John Huffam Dickens was born in Portsea Island, England, on February 7, 1812, to John, a clerk at the 'Navy Pay Office', and his wife Elizabeth, an aspiring school teacher.
Three years later, the family moved to London, and finally settled down in Chatham, where Charles spent his childhood along with his siblings Frances, Letitia, Harriet, Frederick, Albert, and Augustus.
As a child, Charles was an avid reader, fond of books like 'Robinson Crusoe', 'The Arabian Nights', and 'Gil Blas'. His favourite writers were Scottish poet Tobias Smollett, and English author Henry Fielding. He pursued his elementary education from a private institution, and later at a school owned by a man named William Giles.
In 1824, John was arrested for not repaying £40 and 10 shillings to a baker named James Kerr. He was joined by his wife and all children except Charles. The boy started living with a distant relative, Elizabeth Roylance.
The child had no option but to drop out of school and start working at the 'Warren's Blacking Warehouse'. Here, he earned six shillings a week for labelling pots containing blacking substance.
On inheriting some money, John repaid his debtors, and was released from prison, but the little boy was still forced to work in the warehouse. Later, he resumed his education at the 'Wellington House Academy', located in Camden Town. However, the young child was not happy since it was not a very pleasant atmosphere to study in.
In May, 1827, Dickens was hired at the law firm of Ellis and Blackmore, as an office boy. After learning shorthand, he began working as a freelance reporter for a society of civil lawyers, known as 'Doctors' Commons'. 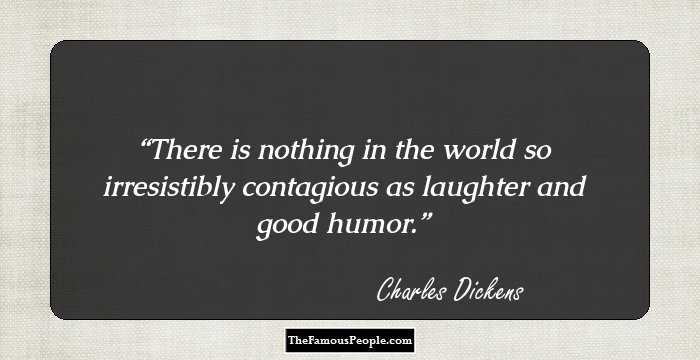 Continue Reading Below
Career
In 1832, Dickens began working at the 'House of Commons' of the United Kingdoms, for 'The Mirror of Parliament', a journal that reported Parliamentary discussions. He also worked the 'Morning Chronicle', writing news articles on election activities in Britain.
The following year, in 1833, he published his first work of fiction, 'A Dinner at Poplar Walk', in 'Monthly Magazine', a publication managed by political editor, Richard Phillips.
Two years later, the editor of ‘Evening Chronicle’, George Hogarth, requested the budding writer to contribute his sketches. Charles began visiting Hogarth at the latter's house and became friends with the whole family.
In 1836, he published his first compilation, 'Sketches by Boz', a collection of short literary pieces accompanied by pictures drawn by caricaturist George Cruikshank. Boz was a pseudonym that was inspired by the nickname 'Moses', by which Charles would address Augustus, his brother.
The same year, the writer who had gained recognition by then, was employed by the literary magazine, 'Bentley's Miscellany', as its editor. In 1836, he also completed writing his novel, 'The Pickwick Papers', which was initially serialized, and became quite popular.
From 1837-39, he published two more famous novels, 'Oliver Twist', and 'The Life and Adventures of Nicholas Nickleby'. 'Oliver Twist' was particularly revolutionary, as it had a young child as the hero. The novel vividly depicted the hardships faced by impoverished children, and the crimes that ensue.
In 1842, the writer travelled with his family to the United States, a trip that he recollected in his travel memoir, 'American Notes for General Circulation'. In the travelogue, he criticized slavery in America, something he had already depicted in 'The Pickwick Papers', but in relation to England.
From 1843-49, Dickens published three stories with the spirit of Christmas as its theme, 'A Christmas Carol', 'The Chimes', and 'The Cricket on the Hearth'.
'A Christmas Carol', printed in 1843, was the most famous, with its depictions of Christmas, and the ideals of sharing that it conveyed.
Continue Reading Below
During the same period, he also published novels including 'Dombey and Son', and 'The Life of Our Lord'. 'Dombey and Son' based the protagonist's character of the proprietor of a shipping company, on his godfather, Christopher Huffam. 'The Life of Our Lord' spoke about the story of Jesus Christ, and was a product of his faith in Christianity.
Towards the end of the decade, he also wrote 'David Copperfield', which is considered to be a semi-autobiographical novel. Several characters of the novel were based on people he had known throughout his life.
During 1850-59, he worked for the weekly journal 'Household Words', as its editor and contributor. Around the same time, he also published novels like 'Bleak House', 'Hard Times', 'Little Dorrit', and 'A Tale of Two Cities', that quickly became popular.
From 1860-70, the prolific writer worked on his novel, 'Great Expectations', and 'Our Mutual Friend '. He also joined 'The Ghost Club', owing to his deep interest in supernatural and paranormal phenomenon.
On June 9, 1865, he met with an accident on his way back to England from Paris. All carriages but the one Charles was travelling in, was derailed, and the writer saved several lives in the disaster. This incident formed the basis of his short paranormal story, 'The Signal Man', where the protagonist knows he will die in a rail accident.
In 1867, the famous novelist went for a reading tour to America, where he earned almost £19,000. During the 76 sessions, he met distinguished writers and publishers like Ralph Waldo Emerson, James Thomas Fields, and Henry Wadsworth Longfellow.
On April 22, 1869, he suffered a stroke, at Preston, Lancashire, and had to pull out of a reading tour in England and Scotland. He had already done 75 sessions of reading, and 12 more were pending. 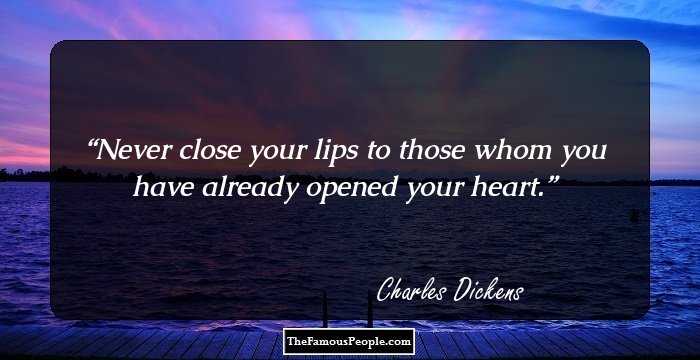 Quotes: You, Never, Heart
Major Works
Amongst several popular, ‘David Copperfield’ is one of the most popular works penned down by Dickens. Considered to have several autobiographical elements, the author has used his debt-ridden father, John as the groundwork for the character Mr. Micawber, and his mother Elizabeth as the model for Mrs. Micawber.
Continue Reading Below
The writer is also known for his story 'A Christmas Carol', which claims the highest number of movie adaptations.
Personal Life & Legacy
On April 2, 1836, the famous novelist got married to editor George Hogarth's daughter, Catherine. The couple had ten children in the course of twenty-two years of marriage.
In their house at Bloomsbury, the family was joined by Catherine's siblings, Frederick and Mary. The latter was idolized by the author and the character of Rose Maylie from 'Oliver Twist', was based on her.
In 1842, Georgina, Catherine's elder sister came to live with the Dickens family, taking responsibility of the children's upbringing.
Upon being persuaded by philanthropist Angela Burdett Coutts, in 1846, Dickens established an institution named 'Urania Cottage', for the welfare of poor women, who were believed to have lost their chastity.
In 1857, he met Ellen Ternan, an eighteen year old actress, who had a part to play in his play 'The Frozen Deep', and fell in love with her. Within a year, Charles' relationship with his wife Catherine turned sour, and the latter found out about the secret affair.
Catherine and her husband separated in 1858, and the former took one child, leaving the rest under the care of her sister Georgina. Till his death, the famous writer maintained his relationship with Ellen Ternan, and it is speculated that they had a child who died in infancy.
On 8 June 1870, Dickens suffered a second bout of paralysis, at his Gad's Hill home. Following the attack, he remained in unconsciousness till his death the following day. His desire was to be buried without a ceremony, at the 'Rochester Cathedral'. However, owing to his popularity, he was cremated at the 'Poets' Corner of Westminster Abbey'.
His grave tomb read "To the Memory of Charles Dickens (England's most popular author) who died at his residence, Higham, near Rochester, Kent, 9 June 1870, aged 58 years. He was a sympathiser with the poor, the suffering, and the oppressed; and by his death, one of England's greatest writers is lost to the world."
His will left a majority of his wealth to his friend John Forster, and his sister-in-law, Georgina. Other than that, he allotted an annual allowance to his wife Catherine, and left some money for his servants.
This gifted writer had been praised by the likes of Chesterton, Tolstoy, and Orwell. Karl Marx and George Bernard Shaw had spoken highly of his stories that addressed welfare of children, the eradication of poverty, and the abolition of slavery. However, writers William Wordsworth and Henry James have openly criticized his literary style.
Even though Dickens stated clearly in his will that no statues should be built in his memory, there are several memorials that have been unveiled in his honour. The most famous of these have been erected in Pennsylvania, Australia, and his birthplace, Portsmouth.
This famous novelist has also been honoured by the Bank of England, by featuring him on Series E £10 notes.
A survey, titled 'The Big Read', featured five novels written by this celebrated author, in a list of 'Top 100 books'. 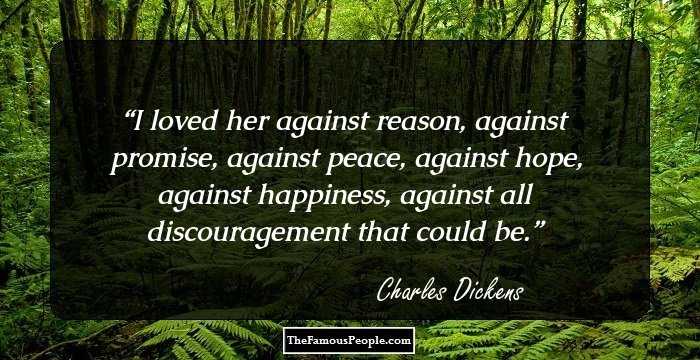 Quotes: Happiness, Peace, Hope, I
Trivia
Phrases like “Merry Christmas!” and “Bah! Humbug”, have become popular after their use in one of his famous novels.

Quotes By Charles Dickens | Quote Of The Day | Top 100 Quotes

See the events in life of Charles Dickens in Chronological Order