(The First Female Aviator to Fly Solo Across the Atlantic Ocean)

Amelia Earhart was one of America’s illustrious aviators and was the first female to fly solo across the Atlantic Ocean. She was known for her unflinching and exploratory spirit that made her a powerful figure among American women. She was the 16th woman in the world to be issued a pilot’s license from the ‘Federation Aeronautique Internationale’ and after a period of laborious aviation training, she took her first flight in a yellow Kinner Airster biplane, flying it an altitude of 14,000 feet. She became the first female pilot in the world to have achieved this feat and she also set the world record for the ‘fastest non-stop transcontinental flight’, which was completed in 19 hours and 5 minutes. Apart from her aviation career, she authored a number of best-selling books during her lifetime about her flying experiences and was instrumental in the formation of the organization for female pilots, ‘The Ninety-Nines’. She was also the proud recipient of a number of distinguished accolades and honors for her outstanding contributions to the world of aviation. A mysterious incident changed the face of aviation forever. When Amelia Earhart embarked on an around-the-world flight, she mysteriously disappeared near Howland Island and was never to be seen or heard of again. To know more interesting facts about her life, scroll further. Charles Lindbergh
24th July In History
DID WE MISS SOMEONE?
CLICK HERE AND TELL US
WE'LL MAKE SURE
THEY'RE HERE A.S.A.P
Quick Facts

Cause of Death: Dissapeared

American Celebrities
Aviators
American Women
Columbia University
Female Pilots
Childhood & Early Life
Amelia Mary Earhart was born to Samuel ‘Edwin’ Stanton Earhart and Amelia ‘Amy’ Otis Earhart. She was the second child born to the couple after a stillborn baby.
From a very young age, she had an adventurous spirit and loved to play outdoors. She was later sent to live with her grandparents, when her parents shifted to Des Moines.
For most part of her early-life, she was home-schooled by her mother and a governess. She was very fond of reading and would spend hours in the family library, reading voraciously.
When the family reunified in 1909, she was sent to school where she studied from the 7th grade till 12th grade.
She then enrolled to Hyde Park High School, from where she graduated in 1916. After graduating, she studied at Ogontz School in Pennsylvania, but failed to complete her program there.
At the outbreak of World War I, she started working with the ‘Volunteer Aid Detachment’ department at the Spadina Military Hospital, where her work necessitated, preparing food in the kitchen and handing out prescribed medication to the wounded.
She joined Columbia University to pursue her medical studies, in 1919, but finally decided to quit after being there for one semester. 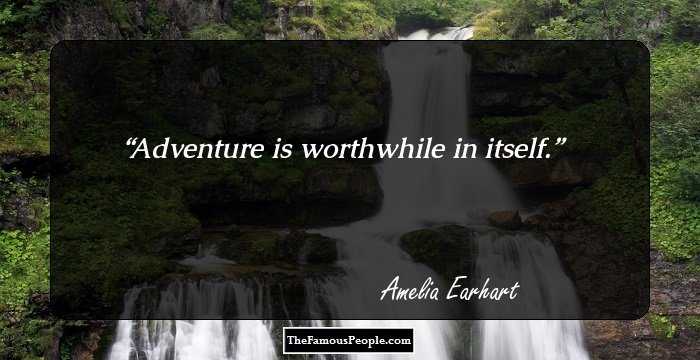 Continue Reading Below
Career
On December 28, 1920, she visited an aerodrome with her father, where Frank Hawks, an air racer, inspired her to pursue a career in aviation. During this time, she became determined to fly, and took up a number of odd jobs to save up money for ‘flying lessons’.
In 1921, she took flying lessons from Neta Snook, a pioneer female aviator, and purchased her first aircraft, a yellow, Kinner Airster biplane, which she fondly called ‘The Canary’. The following year, she created history, by flying the Airster to an altitude of 14,000 feet, setting a world record for female aviators.
She became the 16th woman to have been issued a pilot’s license by the ‘Federation Aeronautique Internationale’ on May 15, 1923.
Around the same time, the family was going through a very rough financial patch and in order to support her family, she had to sell ‘The Canary’ and bought a ‘Speedster’, which she called ‘Yellow Peril’.
She began to work as a social worker at the Denison House, in 1926, where she helped children.
In 1928, she became the first woman to fly across the Atlantic Ocean as passenger. Although she wanted to fly solo over the Atlantic, she could not, as the flight functioned with new instruments and she had no prior experience to handle this new technology.
From 1928 to 1929, she embarked on a lecture tour, which exhausted her. The same year, she decided to fly solo across the North American continent and back, becoming the first woman to do so and gaining immense fame in the process.
In 1930, she became an official of the ‘National Aeronautic Association’. The following year, she set a new record when she flew 18, 415 feet from a borrowed company engine.
She became involved with ‘The Ninety-Nines’, an organization that was established to support a career in aviation for women. She became ‘The Ninety-Nines’ president in 1931 after she was offered her air transport license.
Continue Reading Below
In 1932, she became the first woman ever to fly solo over the Atlantic Ocean in a Lockheed Vega.
In 1935, she once again flew solo over the Pacific Ocean from Honolulu to Oakland and from California to Mexico City. She undertook a nonstop flight Mexico to Newark, New Jersey.
In 1937, she went on an around-the-world flight from Oakland to Hawaii, but in her second attempt, her flight disappeared nearly Howland Island on July 2 the same year. 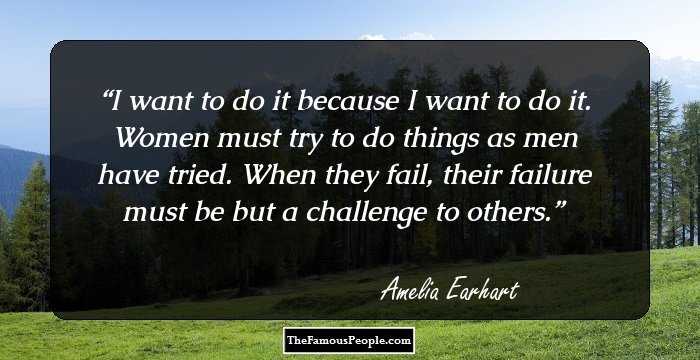 Quotes: Women, I
Major Works
In 1928, she authored the book ’20 Hrs. 40 Min.: Our Flight in the Friendship’ . The book includes details about her first flight across the Atlantic by air and her other important accomplishments. This is largely considered one of her greatest written works and was listed by the ‘National Geographic’ as one of the ‘100 greatest adventure books of all time’. The same was republished in 2003.
Awards & Achievements
She set a record of 19 hours and 5 minutes which became the fastest transcontinental flight by a woman. She then broke her own record after she achieved flight time of 17 hours, 7 minutes and 30 seconds.
She was presented the Army Air Corps Distinguished Flying Cross in 1932.
She was awarded the Gold Medal of National Geographic Society in 1932.
She won the Harmon Trophy for ‘America’s Outstanding Airwoman’ for three consecutive years; 1932, 1933 and 1934.
Continue Reading Below
She was also the proud recipient of the US Distinguished Flying Cross. 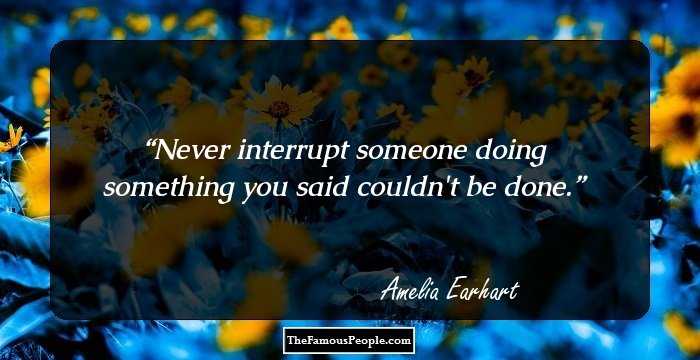 Quotes: You, Never
Personal Life & Legacy
She was engaged to Samuel Chapman but the alliance broke sometime in 1928. She then went on to marry George Palmer Putnam in 1931. Although the couple had no children of their own, Putnam had two sons from his previous marriage.
There has been immense debate about the death of Amelia Earhart. Many believe that her flight crashed in the second around-the-world tour on July 2, 1937, while there have been other suggestions that her plane disappeared. Either way, there have been no records of Earhart or her flight.
After her last recorded cockpit message, the United States Navy searched for Earhart and her flight, but much in vain. Her husband, Putnam also launched several search operations but requested to have the search status, ‘declared death in absentia’. Thus, Earhart was declared legally dead two years after her disappearance in 1937.
Following her death and/or disappearance, her accomplishments went on to inspire a generation of female aviators and continue to inspire budding aviators even today.
The Amelia Earhart Birthplace Museum is now dedicated in her memory and is maintained by ‘The Ninety-Nines’.
Two memorial flights by Ann Dearing Pellegreno and Linda Finch were carried out, where they retraced the final flight path of the courageous Amelia Earhart, just to honor her.
A number of other institutions and establishments have been named after her including Amelia Earhart Centre and Wildlife Sanctuary, Amelia Earhart Field, Amelia Earhart Airport, Amelia Earhart Residence Hall, Amelia Earhart Playhouse and the Amelia Earhart Bridge.
Now, the ‘Amelia Earhart Pioneering Achievement Award’ is a $10,000 women’s scholarship.
She has also been mentioned in a number of songs, books and albums including, ‘In Search of Amelia Earhart’, ‘Amelia Earhart’s Last Flight’ and the film, ‘Amelia Earhart: The Final Flight’.
Trivia
She became the first person to fly solo across both the Atlantic and Pacific Oceans.
In 2006, the National Geographic Channel aired a two-hour episode where they claimed that this famous female aviator survived the ‘final’ world-flight and in fact, lived with the identity of ‘Irene Craigmile Bolam’.

Quotes By Amelia Earhart | Quote Of The Day | Top 100 Quotes

See the events in life of Amelia Earhart in Chronological Order