Chantal Kreviazuk is a Canadian singer-songwriter of adult contemporary music genre who is also a trained classical pianist. Her music potential became evident when she started playing the piano by herself at the age of three. She received classical music training in piano and vocals, and before long she was winning music competitions within her city. As a teenager, her interest shifted from classical music to pop and she began writing commercial jingles for the radio. While on a trip to Italy, she had a terrible accident that almost killed her. This near-death experience made her realize her life purpose—to become a musician. She worked on polishing her musical skills after this incident and began writing more emotive songs. She was signed by Sony Music Canada and brought out her first album ‘Under These Rocks and Stones’ in 1997 in collaboration with Peter Asher and Matt Wallace. Her debut was a resounding success and her singles ‘Surrounded’ and ‘God Made Me’ won the hearts of fans and critics alike. The biggest breakthrough of her career happened with her cover of ‘Leaving on a Jet Plane’ on the soundtrack to the film Armageddon, which was her first international hit. She has also co-written many songs for other artists like Avril Lavigne, Mandy Moore, and David Cook. The Weeknd
Musicians #3494
Singers #3369
Continue Reading Below
DID WE MISS SOMEONE?
CLICK HERE AND TELL US
WE'LL MAKE SURE
THEY'RE HERE A.S.A.P
Quick Facts

Canadian People
Taurus Singers
Women Singers
Taurus Musicians
Women Musicians
Childhood & Early Life
Chantal was born in Winnipeg, Canada, as the only daughter of Carol and John Kreviazuk. She has two brothers and is of mixed descent.
As a small child, she studied music at Royal Conservatory of Music. She attended Balmoral Hall School for girls before joining the University of Manitoba for pursuing a career in Art Studies. 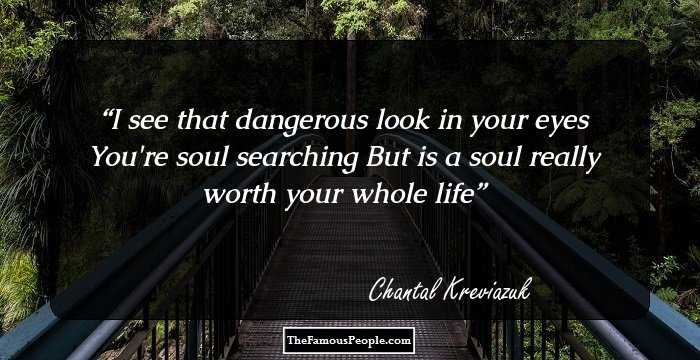 Quotes: Life, Soul, I
Continue Reading Below
You May Like

Famous Beautiful Women With Green Eyes
Career
Her music career officially began in 1997 when she signed a contract with Sony Music and released her first album ‘Under These Rocks and Stones.’ The album became an instant hit and she was invited to perform tour openings for Savage Garden and Amanda Marshall.
In 1998, she recorded a version of the song ‘Leaving on a Jet Plane’ for the soundtrack of the super hit film Armageddon. She recorded a cover of the ballad ‘Feels Like Home’ for the soundtrack of Dawson’s Creek, an American television drama in 1999.
She released her second album ‘Colour Moving and Still’ in 1999. It had songs which she had co-written with her husband Raine Maida. It featured the hit single ‘Before You.’
In 2002, her next album ‘What If It All Means Something’ came out. The single ‘In this Life’ was a big hit in Canada. In the same year, she recorded the song ‘Another Small Adventure’ for the soundtrack in the film Stuart Little 2.
She, along with her husband co-wrote a number of songs for Avril Lavigne's 2004 album, 'Under My Skin'. In the same year, the husband-wife duo co-wrote songs for Kelly Clarkson’s album ‘Breakaway.’
After a break of four years without an album, she released ‘Ghost Stories’ in 2006. The album was produced entirely by her husband. Her song ‘It’s all about a Kiss’ appeared on the soundtrack of the film ‘Just My Luck’ the very same year.
Her fifth album ‘Plain Jane’, released in 2009 reflected her feelings about living a double life. It had a guest appearance by jazz musician Chris Botti.
Major Works
She created a sensation with her very first album, ‘Under these Rocks and Stones’ released in 1997. It included singles like ‘God Made Me’, ‘Believer’, and ‘Surrounded.’ The album was certified multi-platinum in Canada. It was a hit in the U.S also.
Her second album ‘Colour Moving and Still’ (1999) was as successful as her first. It also went on to become a best-seller and was rated multi-platinum in Canada. All the tracks in the album were written by Chantal.
Continue Reading Below
‘What If It All Means Something’, released in 2002 was her third album. It went Gold in Canada. It included singles like ‘In this Life’, ‘Julia’, and ‘Weight of the World.’
The 2006 album ‘Ghost Stories’ was her highest charting album ever. It had a gospel theme to it and was certified Gold in Canada. It features the singles ‘All I Can Do’, ‘Wonderful’, and ‘Ghosts of You.’
Awards & Achievements
In 2000, she won the Juno Award for Best Pop/Adult Album of the year for her album ‘Colour moving and Still.’ The awards are given each year in recognition of the best pop album in Canada.
She is the recipient of the Juno Award for Best Female Artist of the Year (2000). This is an annual award that is presented to the best individual musician in Canada by the Canadian Academy of Recording Arts and Sciences (CARAS).
Personal Life & Legacy
Chantal Kreviazuk is married to Raine Maida, a fellow Canadian musician, since 1999. Together they have three sons.
Trivia
She works with various not-for-profit organizations like War Child Canada and Polar Bears International.
She wrote most of the songs of her first album while recuperating from a road accident.
All her love songs are dedicated to her husband, Raine Maida.
She has made some film appearances though none of them were successful.
You May Like

See the events in life of Chantal Kreviazuk in Chronological Order