Chairil Anwar was a very talented Indonesian poet. He was among those youngsters who pioneered in changing the traditional Indonesian literature and modifying it on the lines of the newly independent nation. He was successful in initiating a transformation of the Indonesian literary scene through his poems. Chairil Anwar was considered as the greatest literary figure of Indonesia by American poet and translator, Burton Raffel. Apart from writing over 94 works, including 71 poems, he is also credited for drafting a few prose pieces, which went missing. In addition to this, he translated a number of poetry and prose compositions. This literary figure became one of the most celebrated Indonesian poets during the 1940s, through his ‘1945 Generation’ style of writing, incorporating individualism, death, and existentialism with his everyday language, inspired largely by European writers. He was rightly described as ‘the perfect poet’ by Dutch scholar of Indonesian literature, A. Teeuw, for his distinct pattern of short and long linked lines, breaking the monotonous trend of traditional four line pattern. Some of his popular poems include ‘Nisan’ (Gravestone), ‘Aku’ (Me), ‘Dimesjid’ (At the Mosque), ‘Diponegoro’, ‘Isa’ (Jesus), ‘Doa’ (Prayer), and ‘Cemara Menderai Sampai Jauh’ (Fir Trees Are Sown Off Into The Distance). 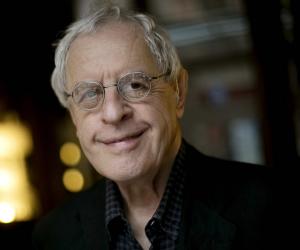 William Cowper
Poets #965
Writers #4927
26th July In History
DID WE MISS SOMEONE?
CLICK HERE AND TELL US
WE'LL MAKE SURE
THEY'RE HERE A.S.A.P
Quick Facts

Indonesian Celebrities
Leo Poets
Leo Writers
Male Poets
Male Writers
Childhood & Early Life
Chairil Anwar was born on July 26, 1922 in Medan, North Sumatra, as the only child of Toeloes and Saleha, both residents of Lima Puluh Kota district, West Sumatra.
As a child, he went to Dutch elementary school for indigenous people, Hollandsch-Inlandsche School (HIS), and later attended Dutch junior high school, Meer Uitgebreid Lager Onderwijs, but dropped out at the age of 18.
He moved to Batavia (now Jakarta) with his mother in 1941, after his parents divorced, where he was introduced to the world of literature. 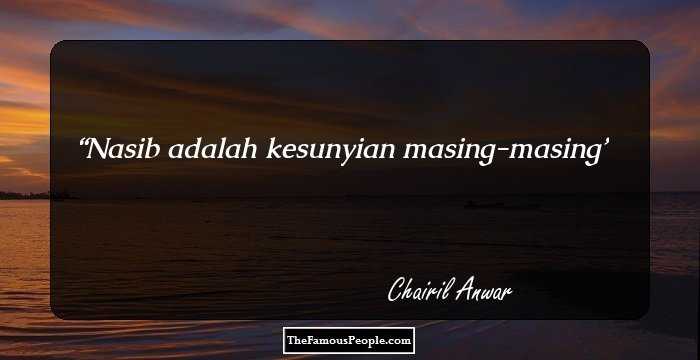 The Hottest Male Celebrities With The Best Abs
Career
With a dream to become an artist since childhood, he started reading books of international authors, like WH Auden, Hendrik Marsman, Rainer Maria Rilke, and Edgar du Perron, which became his inspiration and influenced his works.
In 1942, he apparently wrote his first poem ‘Nisan’ (Gravestone), drawn by the shocking death of his grandmother, which brought him into limelight. Since then, he wrote numerous poems that referred to the awareness of death.
Hoping to get his poems published, he went to Pandji Pustaka magazine in 1943, only to get most of his works rejected on the ground that they were too individualistic and not following the spirit of the Greater East Asia Co-Prosperity Sphere.
He worked as a broadcaster in Japanese Radio, in Jakarta. Eventually, he went on to launch his own magazine, Gema Gelanggang.
His inspiration from European authors offered a fresh dose of poetry and verses to the ‘1945 Generation’ group, which contrasted with the traditional ‘New Authors Generation’ of the 1930s, whose work was more nationalist-based.
He was known for combining his everyday language into an unusual manner to create his individualistic poems. His writing style was distinguished by a blend of short, stand-alone lines with long-linked lines.
In 1949, he authored his last poem ‘Cemara Menderai Sampai Jauh’ (Fir Trees Are Sown Off Into The Distance).
After his death, his works were drawn into controversy for plagiarism, though only one was verified.
Most of his poems were inspired from others but were modified completely with new ideas to create a fresh piece.
Continue Reading Below
He is said to have composed 94 works during his entire life, which included 71 poems, of which most of them were published after his death posthumously and later, translated into English, Dutch, and French.
Apart from writing poetry, he also authored seven prose works and translated around ten poems and four prose pieces.
His works were compiled by documentarian HB Jassin in ‘Chairil Anwar: Pelopor Angkatan 45’ in 1956, while the English translations were published by Burton Raffel in 1970 as ‘The Complete Poetry and Prose of Chairil Anwar’.
His poems, originals and adaptations, have been collected in three books – ‘Roar Mixed with Dust’ (1949), ‘Sharp Pebbles the Seized and the Severed’ (1949), and ‘Three Tear Open Fate’ (1950, co-authored with Rivai Apin and Asrul Sani).
While his early poems clearly exhibited influence of Hendrik Marsman, his later works were inspired from Xu Zhimo, Rainer Maria Rilke, and J. Slauerhoff. 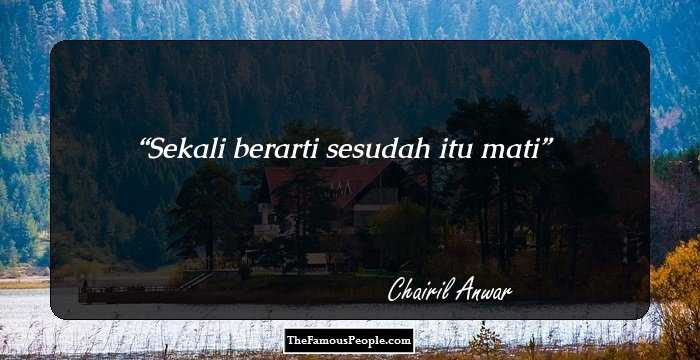 Major Works
He released ‘Aku’ (Me) in 1943, at the Jakarta Cultural Centre, which came to be known as his most notable poem, reflecting his vitality and individualistic writing theme.
Personal Life & Legacy
He married Hapsah Wiraredja in August, 1946, and fathered a daughter, Evawami Alissa. However, the marriage did not last long and ended in a divorce in 1948.
Apparently due to his hectic schedule, he got physically weak and fell ill with several diseases. He died on April 28, 1949 in a CBZ Hospital (now R.S. Ciptomangunkusomo), Jakarta.
He was buried at Karet Bivak Cemetery, Jakarta, on April 29. The cause of death was uncertain, with some hinting tuberculosis, some typhus, and others suggesting syphilis.
His death anniversary, April 28, is celebrated as National Literature Day in Indonesia. 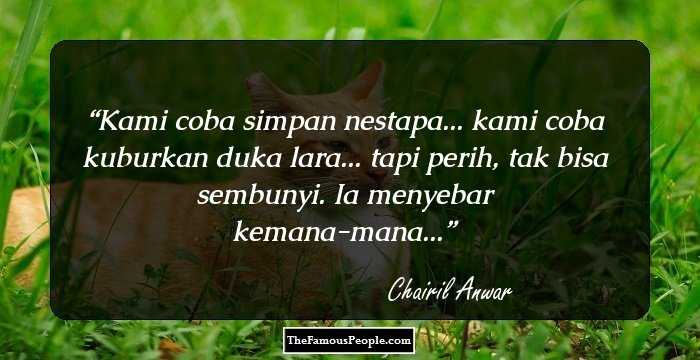 Trivia
Even though he did not complete his schooling, he had a good command over English, German, and Dutch
You May Like

Quotes By Chairil Anwar | Quote Of The Day | Top 100 Quotes

See the events in life of Chairil Anwar in Chronological Order 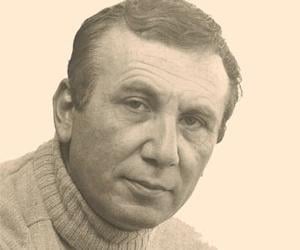