Caravaggio baptised Michelangelo Merisi was an extremely popular painter during the Baroque Movement and he himself was instrumental in creating new techniques of paintings such as ‘Tenebrism’. He was born in Milan and a plague left him fatherless. Unfortunately, his mother too died after a short period which orphaned him at a very tender age. He probably had an innate interest in painting and owing to this he shifted to Milan and started getting trained under a renowned painter. He then worked with many others painters but finally, realization dawned onto him and he decided to work independently. He created many paintings and even got buyers for those artistic pieces. The trader who bought his paintings introduced his work to Cardinal Francesco del Monte, who liked his paintings to such an extent that he gave Caravaggio shelter as well as entitled him to an allowance. A milestone in this painter’s career was when he was chosen to decorate a chapel. The paintings he made for the chapel got him into controversy and at the same time earned him popularity. He is credited with making a shift from the spiritual perspective of painting and taking a more realistic approach in painting. He was pioneer of the Realism style which replaced the predominant Mannerism style of painting in the then Italy Andrea Pozzo
Baroque Painters #1
Artists & Painters #12
DID WE MISS SOMEONE?
CLICK HERE AND TELL US
WE'LL MAKE SURE
THEY'RE HERE A.S.A.P
Quick Facts

Italian People
Italian Artists & Painters
Male Artists & Painters
Libra Artists & Painters
Italian Baroque Painters
Childhood & Early Life
He was born on 29th September, 1571 to Fermo Merixio and Lucia Aratori, in Milan, Italy. The outbreak of a plague forced his family to move to a place called Caravaggio in 1576. The plague claimed the lives of most of his family members including his father and thereafter, he grew up in Caravaggio.
In 1584, his mother died, and apparently after this he shifted to Milan where he became an apprentice under painter Simone Peterzano. 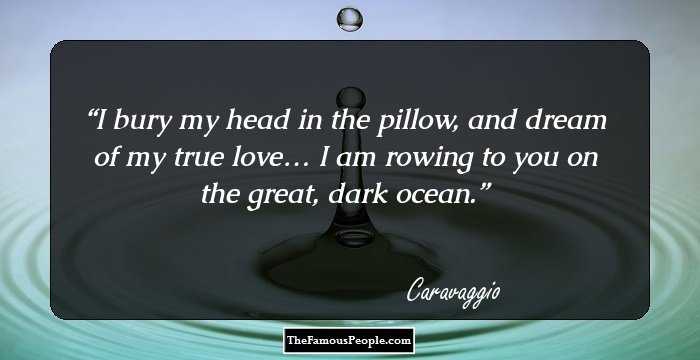 The Sexiest Men Of 2020, Ranked
Career
In late 1580s, he travelled to Rome, worked with varied painters and frequently changed his vocation.
During 1590s, he made many paintings which had themes pertaining to daily life and were not in tune with the spiritual themes prevalent during that time. His paintings during that period include ‘The Fortune Teller’, ‘The Cardsharps’, ‘Boy with a Fruit Basket’, ‘The Young Bacchus’, and ‘The Music Party’.
In and around 1595, he created his own paintings and sold them to a trader named Maestro Valentino, and this trader made his paintings come to the notice of Cardinal Francesco del Monte.
Soon the cardinal became an admirer of his art and let him stay in his own house. Apart from providing Caravaggio with art supplies, he also granted him some allowance as well.
Under the patronage of del Monte, he made several paintings such as ‘The Lute Player’, ‘The Musicians’, ‘Boy Bitten by a Lizard’, and ‘Bacchus’.
In 1596, he put on canvas the ‘Basket of Fruit’ painting which is distinct and lifelike. With his works ‘Realism’ style of painting took a lead over the ‘Mannerism’ form of painting.
One of his early realistic paintings which defied spiritual themes was ‘Penitent Magdalene’. This was followed by many paintings, based on the same line, like ‘Martha and Mary Magdalene’, ‘Saint Catherine’, ‘Judith Beheading Holofernes’, ‘Saint Francis of Assisi in Ecstasy’, ‘Sacrifice of Isaac’ and ‘Rest on the Flight into Egypt’.
In 1597, he got the opportunity to decorate the ‘Contarelli Chapel’, which was a turning point in his life and for the Italian style of painting. He made lifelike images of St. Matthew’s life cycle which vividly manifested the realism in his art form.
These paintings include ‘St. Matthew and the Angel’, ‘The Calling of St. Matthew’, and ‘The Martyrdom of St. Matthew’ which were completed during the period 1598-1601. These realistic portrayals of the saint created much chaos among the public as well as the church authorities.
Continue Reading Below
However, this opportunity to paint for the chapel paved a new way for his artistic creations. He dabbled with biblical themes in his paintings and incorporated realistic elements to these works.
Some of his notable paintings from 1601 to 1602 are ‘Crucifixion of St. Peter’, ‘Conversion of Saint Paul on the Road to Damascus’, ‘Conversion on the Way to Damascus’, ‘Supper at Emmaus’, ‘Amor Vincit Omnia’, ‘Saint Matthew and the Angel’, ‘The Inspiration of Saint Matthew’, ‘John the Baptist’, ‘The Incredulity of Saint Thomas’ and ‘The Taking of Christ’.
During the period 1603-05, he created paintings such as ‘The Entombment of Christ’, ‘The Crowning with Thorns’, ‘Madonna di Loreto’, ‘John the Baptist’, ‘The Calling of Saints Peter and Andrew’, ‘Christ on the Mount of Olives’, ‘Ecce Homo’, ‘Saint Jerome in Meditation’, ‘Saint Jerome Writing’, ‘Portrait of Pope Paul V’ and ‘Still Life with Fruit’.
‘Madonna and Child with St. Anne’, ‘Death of the Virgin’, ‘Mary Magdalen in Ecstasy’, ‘Saint Francis in Meditation’, ‘The Seven Works of Mercy’, ‘The Crucifixion of Saint Andrew’, ‘David with the Head of Goliath’, ‘Madonna of the Rosary’, ‘The Crowning with Thorns’, ‘The Flagellation of Christ’, ‘Christ at the Column’ and ‘Salome with the Head of John the Baptist’ are some of his creations from 1606 to 1607.
This talented artist’s paintings from 1608 till his death comprise of ‘Portrait of Alof de Wignacourt and his Page’, ‘Portrait of Fra Antonio Martelli’, ‘The Beheading of Saint John the Baptist’, ‘Sleeping Cupid’, ‘Annunciation’, ‘Burial of Saint Lucy’, Raising of Lazarus’, ‘Adoration of the Shepherds’, ‘Salome with the Head of John the Baptist’, ‘The Denial of Saint Peter’, ‘Saint Francis in Prayer’, and ‘The Martyrdom of Saint Ursula’.
Major Works
One of his most significant works is his paintings of St. Matthew which portrayed the saint in realistic light were a deviation from the spiritual and religious theme. These paintings put him trouble because of their content but at the same time made him follow a new path in painting.
This was succeeded by many masterpieces like ‘The Supper at Emmaus and ‘Death of the Virgin’.
Personal Life & Legacy
This painter is known for having a very bad temper and apparently, he engaged in duals often. In 1606, he was alleged with the charges of murdering a procurer named Ranuccio Tomassoni. However, the reason behind this act is still obscure although many speculations have been made during these years.
Soon after, to escape from punishment, he left Rome and travelled through Malta, Naples, Sicily and many other places. Even while on the run, he continued to produce works of art.
In 1608, he again engaged in a conflict with Fra Giovanni Rodomonte Roero, who was a knight in the Order of St. John in Malta, which led him to prison but he was soon released.
The following year, Roero got back at him in Naples and attacked him as well as defaced him. This affected the painter deeply and this was visible in his paintings which followed.
In 1610, he decided to travel back to Rome and on his way he was taken into custody at Palo. However, after a brief period of imprisonment he was released. He travelled then continued his voyage and reached Port' Ercole.
After a short period, on 18th July, 1610, this skilled artist breathed his last. The reason behind his sudden death is undetermined but recently some researchers speculated that high content of lead in his body could be the cause of his death.
You May Like

See the events in life of Caravaggio in Chronological Order