Bret Easton Ellis is an American novelist, screenwriter, and short story writer. He was born into a wealthy family. His father, Robert Martin Ellis, was a property developer, and his mother, Dale Dennis Ellis, a homemaker. He grew up in Sherman Oaks in San Fernando Valley. His first novel was the well-received “Less Than Zero” about a bunch of rich and disillusioned teenagers growing up in Los Angeles. Years later, he followed it up with a sequel called “Imperial Bedrooms”. He very often links the characters of his works as is evident from his collection of short stories, “The Informers”, which has common characters. The stories are narrated in first person by different characters, though they appear in all the stories. His works are “transgressional” in nature. His book “American Psycho” ran into problems with women’s groups for its violence and sexual content. It is, however, regarded widely as his best work yet. “Less Than Zero”, “The Informers”, “American Psycho”, and “The Rules of Attraction” were made into movies. He has also written the screenplay for the movies “The Canyons” and “The Curse of Downers Grove”.“Lunar Park” won a World Fantasy Award nomination for Best Novel. He has not declared his sexuality explicitly because he thinks people will read his books differently based on their opinion about him. American People
Novelists
American Men
Bennington College
Tall Celebrities
Childhood & Early Life
Bret Easton Ellis was born on March 7, 1964 to Robert Martin Ellis, a wealthy property developer, and Dale Dennis Ellis, a homemaker. He was raised in Sherman Oaks in San Fernando Valley. His parents divorced in 1982.
He was educated at The Buckley School. He enrolled for a music-based course at Bennington College in Vermont. There he became friends with writers Donna Tartt and Jonathan Lethem. 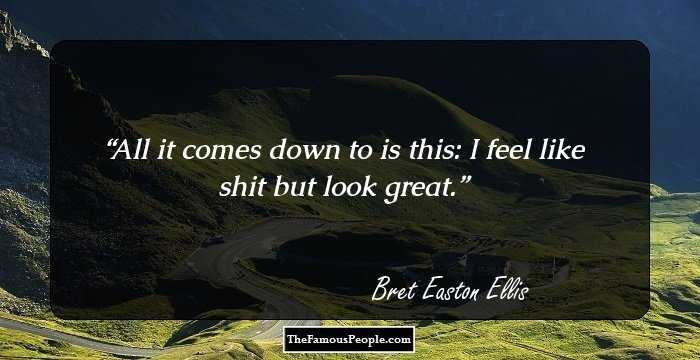 Quotes: Like, I
Continue Reading Below
Career & Later Life
Bret Easton Ellis’s first novel was “Less Than Zero”. Published in 1985 when he was 21, and still in college, it is the story of disaffected, disillusioned, rich teenagers of Los Angeles.
“Less Than Zero” was loosely adapted into a movie in 1987 by 20th Century Fox. It starred Andrew McCarthy, Robert Downey Jr., Jami Gertz, and James Spader.
He authored a collection of short stories called “The Informers” published in 1994. The stories have interlinked characters. He partnered Nicholas Jarecki, and wrote the script for a movie version of the stories.
His 1998 novel “Glamorama” is a satire on celebrity culture and consumerism.It follows the story of a male model who becomes involved in a terrorist organization comprised entirely of other models.
In 2000, his novel “American Psycho” was made into a dark, comic movie by Guinevere Turner and Mary Harron. It was released by Lions Gate Films. The protagonist was played by Christian Bale.
His “The Rules of Attraction” was adapted into a movie in 2002. Directed by Roger Avary, its star cast included James Van Der Beek, Shannyn Sossamon, Ian Somerhalder, and Kip Pardue.
Bret Easton Ellis’ “Lunar Park” is a mock memoir with many characters being fictionalized portrayals of real people including himself, his father, and friend, author Jay McInerney. It was released by Knopf in 2005.
His “Imperial Bedrooms”, released in 2010, is a sequel to “Less Than Zero”. It revisits the previous novel’s self-destructive and disillusioned youth nearly twenty-five years later as they approach middle-age in the present day.
In 2013, he wrote the screenplay to the movie “The Canyons”. It is an erotic thriller directed by Paul Schrader. Set in Los Angeles, the movie stars Lindsay Lohan and James Deen among others.
Continue Reading Below
He is currently writing the screenplay for the movie “The Curse of Downers Grove” along with its director Derick Martini. It is based on the novel “Downers Grove” by Michael Hornburg. 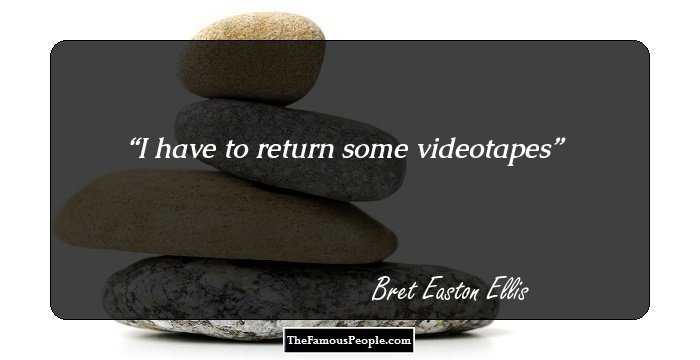 Quotes: I
Major Works
Bret Easton Ellis’ second novel “The Rules of Attraction” was published in 1987. It is a comic depiction of a few promiscuous and spoiled college students in New Hampshire involved in a love triangle.
“American Psycho” was his third novel, published in 1991. The lead character, Patrick Bateman, is a serial killer and Manhattan businessman. The book created a lot of controversy for its violence and sexual content.
Awards & Achievements
In 2013, he won an award from the Melbourne Underground Film Festival in the Best Screenplay category for the movie, “The Canyons”. It is an erotic thriller directed by Paul Schrader, starring Lindsay Lohan. 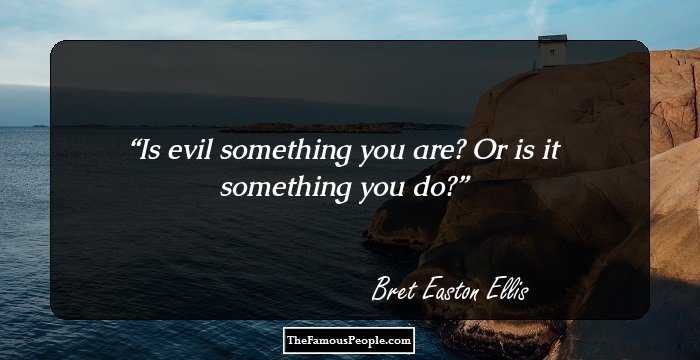 Quotes: You
Personal Life & Legacy
Bret Easton Ellis is known to be gay, and Michael Wade Kaplan, to whom he dedicated the book “Lunar Park”, was his lover. However, he does not identify himself as gay or straight.
Trivia
This contemporary novelist took the title for his book “Less Than Zero” from Elvis Costello’s 1977 song of the same name. The sequel, “Imperial Bedrooms”, also takes its name from an album by Costello.
This author’s book “Glamorama” inspired contemporary Italian composer Lorenzo Ferrero so much that he wrote a composition for chamber ensemble entitled “Glamorama Spies” in 1999.