Brandon Lee was an American actor and martial artist. After graduating with a major in theatre from college, he went on to take up various jobs in the film industry. After working as a script editor and playing cameo roles, he later began portraying lead characters in action movies. Most of the films and television projects that Brandon Lee took up were action thrillers or projects that were based on martial arts. Brandon Lee was trained in martial arts just like his well-known father Bruce Lee. Brandon Lee was trained in different forms like Shaolin Kung-Fu, Muay Thai, Wing Chun and Jeet Kune Do. He was mostly trained by his father’s disciples Dan Inosanto and Richard Bustillo. In an interview, Brandon Lee explained his view on martial arts and its connection with self-knowledge. In the interview, he went on to say that while mastering martial arts one might face many barriers that might stop them from continuing their pursuit. He also said that once the barriers are overcome, one always learns something about oneself, which can be viewed as a spiritual experience. Brandon Lee died in a shooting accident while filming a movie when he was 28 years old. He was known to be a poetic and loving personality.

American Celebrities
Dancers
Martial Artists
American Men
California Actors
Childhood & Early Life
Brandon Lee was born on 1 February 1965 in Oakland, California, USA. He was the son of martial arts expert and film actor Bruce Lee and teacher Linda Emery.
Brandon Lee lost his father when he was eight years old. He, along with his family, moved to Seattle following the death of Bruce Lee.
Brandon Lee received his high school education from ‘Chadwick School’ and ‘Bishop Montgomery High School’ in Los Angeles. He received his ‘General Educational Development’ certificate at the age of 18.
He attended ‘Emerson College’ in Boston, Massachusetts and took up majors in theatre. However, a year later, he shifted to New York where he took acting classes from the famous ‘Lee Strasberg Theatre and Film Institute.’ 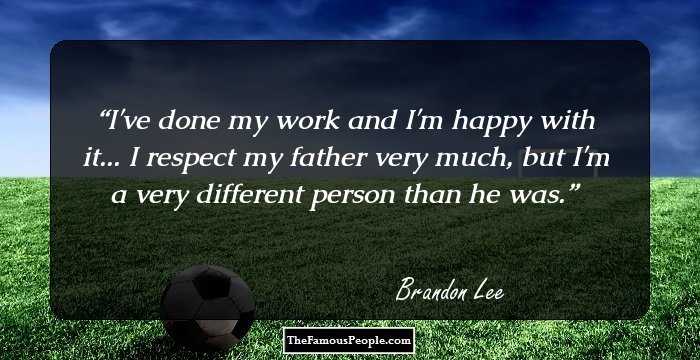 Continue Reading Below
Career
In 1985, Brandon Lee returned to Los Angeles and began his career with ‘Ruddy Morgan Productions’ as a script reader. His first screen appearance was an uncredited cameo in the action movie ‘Crime Killer’ which released in 1985.
Brandon Lee was called for an audition for his first major movie role by casting director Lyn Stalmaster. Upon successfully completing the auditions, he became a part of ‘Kung Fu: The Movie.’ He was given the role of the son of the lead character. The movie was based on a popular television series named ‘Kung Fu’ of the 1970s.
Brandon Lee landed his first leading role in the Hong Kong thriller movie ‘Legacy of Rage’ in 1986. In the movie, he acted alongside Regina Kent, Michael Wong, and Mang Hoi. His performance in the movie was well appreciated.
In 1987, he acted in the television pilot project ‘Kung Fu: The Next Generation’ which was not selected for running as a series. However, it was aired by the ‘CBS Summer Playhouse.’ This pilot project was the second follow-up of the initial television series ‘Kung Fu.’
In 1988, Brandon Lee made a brief appearance in the American television series ‘Ohara.’ He portrayed a negative character in the series. The same year, he also began shooting for his first English movie project named ‘Laser Mission.’ The movie was shot in South Africa and later released in the European market in the year 1990.
In 1991, Brandon Lee starred in an action movie titled ‘Showdown in Little Tokyo’ alongside Dolph Lundgren. This was considered to be his debut American film. The same year, he signed a multi-picture deal with ‘20th Century Fox’ film studio.
In 1992, he starred in the action thriller ‘Rapid Fire,’ which was distributed by ‘20th Century Fox.’ He was signed to do two more projects. The same year, he also landed the lead role in the film adaptation of the underground comic book, ‘The Crow.’ This was his last project, and the movie was released posthumously in 1994. 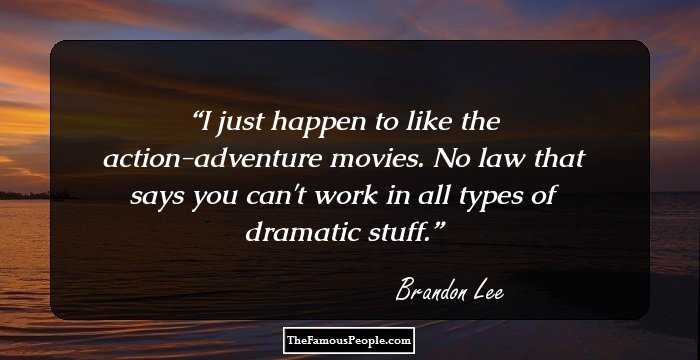 Major Works
Brandon Lee was recognized for his performance in action thriller films. He is remembered for his movies, ‘Kung Fu’ and ‘The Crow.’
For his movie ‘The Crow,’ Brandon was posthumously awarded the ‘Best Actor’ in 1994 at the ‘Fangoria Chainsaw Awards.’
Personal Life & Legacy
Brandon Lee met Eliza Hutton in 1990. They moved in together the next year and got engaged in October 1992. Brandon Lee and Eliza had planned their wedding on 17 April 1993 in Mexico. However, the marriage did not happen as Brandon Lee died after an unfortunate accident.
On 31 March 1993, while shooting for his film ‘The Crow,’ Brandon Lee died of a gunshot wound after an accidental shooting. His body was buried in Seattle, next to his father Bruce Lee’s tomb, at the ‘Lake View Cemetery.’ 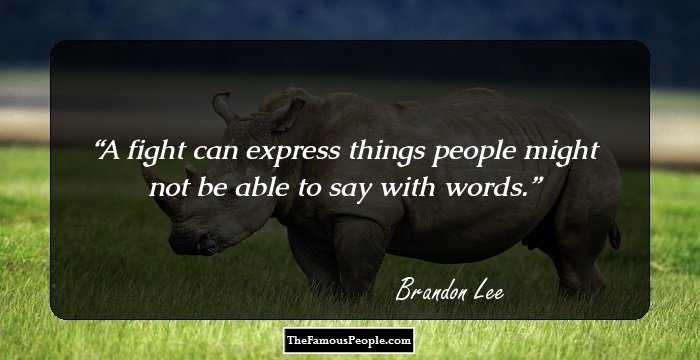 Trivia
The movie ‘The Crow’ is dedicated to Brandon Lee and Eliza Hutton.
Brando Lee was the grandson of Cantonese opera singer Lee Hoi-chuen.

Quotes By Brandon Lee | Quote Of The Day | Top 100 Quotes

See the events in life of Brandon Lee in Chronological Order