(The Most Influential Martial Artist of All Time)

Joe Lewis quote, “If Bruce Lee wasn't the greatest martial artist of all time, then certainly he is the number one candidate” suffices Bruce Lee’s contribution as a martial artist to the world. A film actor and instructor of the combat practices, he gained a worldwide status in a short span of life and soon became one of the most influential martial artists of all time. Born in an affluent family, Lee gained entry into films long before he realized the same and soon became a famous child actor. Acting and martial arts went hand in hand as he turned to a martial art instructor. However, it was his relocation to Hong Kong and association with films that elevated the popularity of both him as an actor and martial arts as a combat practice. His films created box office records, eventually changing the way martial arts and films related to it were looked upon by the world. Lee is accredited with the formulation of Jeet Kune Do, (The Way of the Intercepting Fist), a new form of martial art which was quite different from the traditional and rigid form in matters of practicality, flexibility, speed, and efficiency. A further reading will brief you about his life and profile in detail. Shannon Lee
DID WE MISS SOMEONE?
CLICK HERE AND TELL US
WE'LL MAKE SURE
THEY'RE HERE A.S.A.P
Quick Facts

Cause of Death: Cerebral Edema

epitaphs: Founder of Jeet Kune Do. In memory of a once fluid man crammed and distorted by the classical mess.

American Celebrities
Hong Konger Celebrities
Martial Artists
American Men
California Actors
University Of Washington
Childhood & Early Life
Bruce Lee was born to Lee Hoi-chuen and Grace Ho in San Francisco's Chinatown. When he was three months old, his family relocated to Hong Kong. He had four siblings
Despite being raised in an affluent family, he was involved in a lot of street fights and gang rivalries which urged the need to be trained in martial arts. His first tutor was his father, under whom he learned the basics.
By the age of 13, he started his Wing Chun training under Yip Man. His mixed ancestry led him to learn the art of Wing Chun privately from Yip Man and Wong Shun Leung.
Academically, he received his preliminary education from La Salle College, but poor marks resulted in his being transferred to St. Francis Xavier's College.
His continuous involvement in street fight led to his relocation to San Francisco in 1959, as his parents were deeply disturbed by his violent behaviour and wanted him to leave Hong Kong to pursue a safer and healthier avenue.
After putting up in San Francisco for a few months, he moved to Seattle where he enrolled at the Edison Technical School to complete his further education. Meanwhile, he worked as a live-in waiter for Ruby Chow’s restaurant.
He enrolled at the University of Washington in 1961, where he majored in drama. 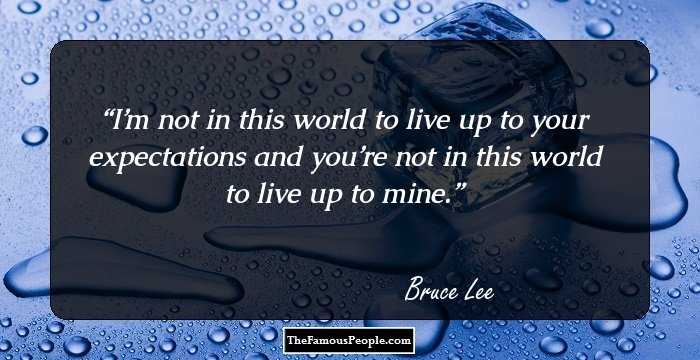 Continue Reading Below
Career
Much before he learned to utter monosyllabic words as a baby, his career had kick-started, owing to the film-background of his father, who was a Cantonese opera star. He was only three months old when he starred in his first film, ‘Golden Gate Girl’.
Ever since his launch into the world of showbiz, his early years of life were eventful. A born actor (quite literally as well), his acting skills polished with every film. By the time he turned 18, he was 20 films old.
From 1959 until 1964, he gave up his acting career to pursue a vocation in martial arts. He started off as a teacher of Kung Fu. With time, he opened his own martial arts school, Lee Jun Fan Gung Fu Institute, in Seattle.
In 1964, he dropped out of college to join James Lee, a famous martial arts instructor on Oakland. Together, the two opened a second institute, Jun Fan Martial Art Studio in the city.
He participated in the 1964 Long Beach International Karate Championships, which popularized him for his ‘two-finger push-ups’ and ‘one inch punch’. It was there that he met Taekwondo master Jhoon Goo Rhee, a friendship that formed instantly and benefitted both artists. He performed in the 1967 event as well.
Meanwhile, in 1964, he had a private match with Wong Jack Man, which he won. Though the result of the match was unanimously declared, there are two versions about the proceedings of it.
His extraordinary performance in Long Beach Karate Championship brought him under the limelight of Hollywood directors. His first stint of acting as a matured adult was in the TV series ‘The Green Hornet’. The show lasted for one season from 1966 until 1967.
From 1967 until 1969, he made guest appearance in few more television series including ‘Ironside’, ‘Here Comes the Brides’ and ‘Blondie’.
In between acting, he found time and started concentrating on martial arts. He realized that traditional martial arts technique were too rigid and that a new system that had traits of practicality, flexibility, speed, and efficiency needed to be devised. This was when Jeet Kune Do or the Way of the Intercepting Fist was formulated.
Continue Reading Below
In 1969, he made a guest appeared in the film, ‘Marlowe’. However, biasness and dearth of key roles resulted in him leaving Los Angeles for Hong Kong in the summer of 1971.
Upon arriving at Hong Kong, he signed a two film contract. First to release was ‘The Big Boss’, which had him in the lead role. The film was a major hit but was soon surpassed by his next film, ‘Fists of Fury’, which went onto become a grand success.
With the 1972 film, ‘Way of the Dragon’, he turned from being merely an actor to the writer, director, star, and choreographer of the fight scenes. Same year, he was offered ‘Enter the Dragon’, which was the first joint venture of Golden Harvest and Warner Bros.
‘Enter the Dragons’ was slated for a July 26, 1973 release. However, just six days before its premier, he passed away. 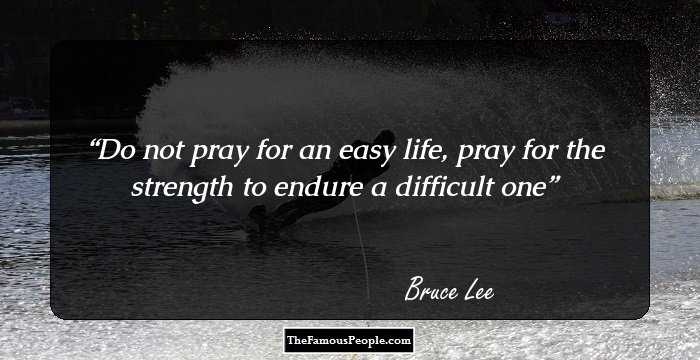 Quotes: Life
Major Works
An iconic martial arts performer, he performed in a number of television shows and films. However, the film that gained the most limelight and made him a ‘hero’ in the West as well was the Golden Harvest and Warner Bros production, ‘Enter the Dragon’. The film grossed about $200 million worldwide.
Awards & Achievements
Posthumously, he was listed in the Time Magazine list of ‘100 Most Influential People of the 20th Century’.
In 2013, he was conferred with the prestigious Founders Award at The Asian Awards. Same year, a statue of him was unveiled in Los Angeles' Chinatown. Standing 7-foot tall, the statue was made in Guangzhou, China and proudly serves as the testament of his accomplishments as a martial arts instructor. 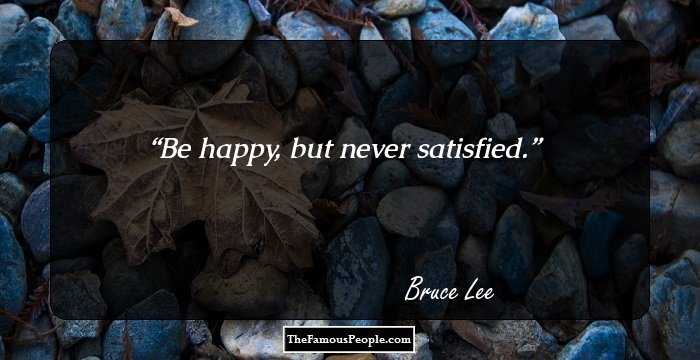 Quotes: Never
Personal Life & Legacy
While studying at the University of Washington, he met Linda Emery, with whom he tied the knot in August 1964. The couple was blessed with two children, Brandon Lee and Shannon Lee.
On May 10, 1973, he collapsed suddenly, while dubbing for ‘Enter the Dragon’ after suffering from seizures and headaches. Immediately, he was rushed to Hong Kong Baptist Hospital, where he was diagnosed with cerebral edema. He recovered from the first collapse.
On July 20, 1973, scheduled to meet James Bond star, George Lazenby, he got ready and arranged a meeting with Raymond Chow and Betty Ting Pei at the latter’s residence to discuss the script of ‘Games of Death’ which he intended to make with Lazenby. He complained of headache and therefore had analgesic. He lay down to take a nap little knowing that it would be his last nap.
He was taken to Queen Elizabeth Hospital where he was declared dead. An autopsy confirmed that the death was due to an allergic reaction caused by the ingredient meprobamate which aides in muscle relaxation that caused a 13% increase in his brain size, from 1,400 to 1,575 grams.
He was buried at his wife’s hometown in Seattle at Lakeview Cemetery. His home in Hong Kong is proclaimed to be preserved and turned into a tourist site by philanthropist, Yu Pang-lin.
Trivia
A martial arts instructor and actor, he is responsible for formulating the Jeet Kune Do or the Way of the Intercepting Fist. His last movie as an actor was ‘Enter the Dragon’.

See the events in life of Bruce Lee in Chronological Order