Bobby Brown popularized new jack swing, a blend of soul, funk, and hip-hop sounds with raps and melodious verses. The illustrious American singer, dancer and songwriter is accredited for keeping alive the new jack swing pioneered by Ted Riley. Born into a poor family, his love for music and the determination to succeed led him to form a band called New Edition with his friends. The band’s first album, ‘Candy Girl’, made them a teenage sensation. He embarked on his solo singing career after being a part of the band for eight years.His first album did not bring him success. However, his second release ‘Don't Be Cruel’ was a sensational hit that brought him critical and commercial success. The album dominated the Billboard Hot 100, and was one of the best-selling albums of the decade. He bagged in his first Grammy Award for 'Every Little Step,' the number one hit from the album and also earned a 'Soul Train Music Award,' a 'People's Choice Award,' and two 'American Music Awards.' His other album, 'Bobby' was well-received but could not match the success of its predecessor. His fourth solo album ‘Forever’ was not successful. Despite his talent, the singer made headlines for all the wrong reasons. His alcoholism and cocaine addiction affected his life and career. His marriage to pop star Whitney Houston was tumultuous and their divorce became the talk of the town. Bobby Brown was born on February 5, 1969, in Boston, Massachusetts, U.S. He was the seventh of eight children born to Herbert Brown, a construction worker and Carole, a schoolteacher. Brown and his siblings grew up in Roxbury's Orchard Park Projects in Massachusetts.

As a boy, he resorted to stealing from stores. He was also involved in gangs and was even shot in the knee during a fight.
At 11, one of his friends was stabbed to death. After this incident, he turned a new leaf and began to take his education and life seriously.

He idolized singer James Brown, and dreamt of being a singer like him since he was three years old. He joined the church choir, where his talent was noticed. 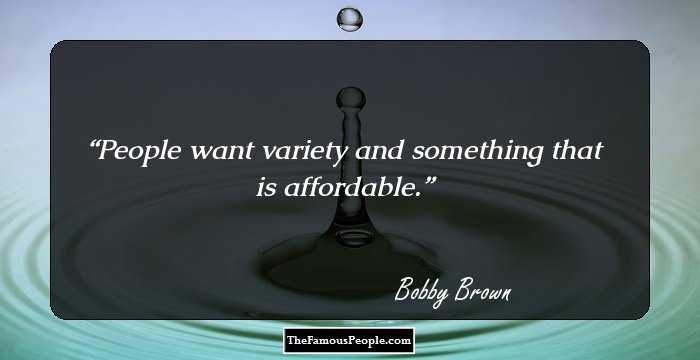 Continue Reading Below
Career
Bobby Brown and his childhood friends, Michael Bovines and Ricky Bell, formed a band called New Edition in 1978. Ralph Tresvant and Ronnie DeVoe too joined the band, over the next four years.
In 1982, they came second in the Hollywood Talent Night held at Boston's Strand Theatre organized by music producer, Maurice Starr. Impressed by their performance, Starr signed them to his Streetwise Records.
New Edition’s debut album, ‘Candy Girl’, in 1983, boasted of the hits, ‘Is This the End,’ ‘Popcorn Love,’ ‘Jealous Girl’ and ‘Candy Girl’, which topped the American R&B and the UK singles charts.
The band’s second album ‘New Edition’ released in 1983. It bettered their debut album with hits such as ‘Cool It Now’ and ‘Mr. Telephone Man’, and achieved double platinum in the U.S.
Their 1985 album, ‘All for Love’, though certified platinum with hits as ‘Count Me Out’, ‘A Little Bit of Love’ and ‘With You All the Way’, could not match the success of its predecessors.
Brown felt that the singers were being underpaid and he was also jealous of band mate Ralph Tresvant’s growing popularity. Brown left the band to go solo amidst the news that he was forced out.
Following a contract with MCA Records, Steven Machat became his manager. In 1986, Brown’s debut solo album, ‘King of Stage’, did not fare well, but the ballad, ‘Girlfriend’ became a No.1 R&B hit.
He embarked on a hugely successful tour to promote the ‘Don’t be cruel’ album in 1988. However, towards the last stages of the tour, he invited criticism for his suggestive and crude acts.
His album, Bobby, in 1992, sold 2 million copies, but failed in comparison to his previous albums. Its singles, ‘Humpin' Around’, ‘Get Away’ and ‘Good Enough’ ‘That's The Way Love Is’ were hits.
Continue Reading Below
His fourth solo album, ‘Forever’, released in 1997, bombed because of inadequate promotion and his insistence on writing and producing the tracks himself.

He re-surfaced in 2002, for a duet with rapper Ja Rule on ‘Thug Lovin'‘. The decade saw him sing in Damian Marley's song ‘Beautiful’ and ‘Real Love’ with singer Macy Gray.

In 2005, he directed the reality series, ‘Being Bobby’, for Bravo TV. His wife, Whitney Houston featured in the series, but following their divorce, the series folded after one season.

New Edition members reunited to perform Jackson 5 hits as a tribute to the late Michael Jackson at the 2009 BET Awards. They formally reunited the next year and continue to perform together.

He guest-appeared in films such as ‘Panther’, ‘Two Can Play That Game’, ‘Gang of Roses’, and ‘Nora's Hair Salon’ and had a major role in ‘A Thin Line Between Love and Hate’. 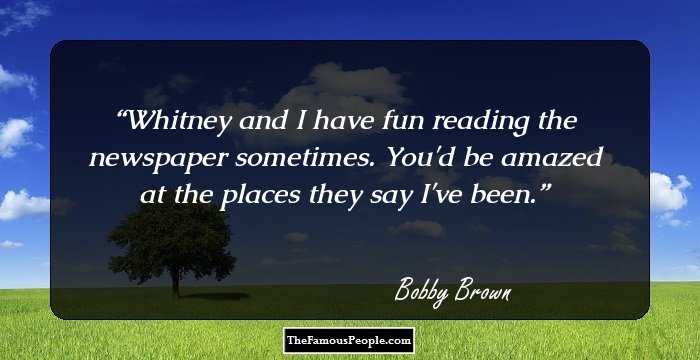 Quotes: You
Major Works
Collaborating with top R&B artists, his album, ‘Don't Be Cruel’, in 1988, included five hit singles of which ‘My Prerogative’ topped the Billboard Hot 100, and was the 33rd best-selling album of the decade.
In 1989, he made a cameo appearance in the film, ‘Ghostbusters II’, and also sang two songs for its soundtrack, one of which was ‘On Our Own’ that topped the U.S. Billboard R&B charts.
Awards
In 1990, Bobby Brown's ‘Don't Be Cruel’ won the American Music Award in two categories- Favorite Pop/Rock Male Artist and Favorite Soul/R&B Album. Three years later, he won the Favorite Soul/R&B Male Artist Award. 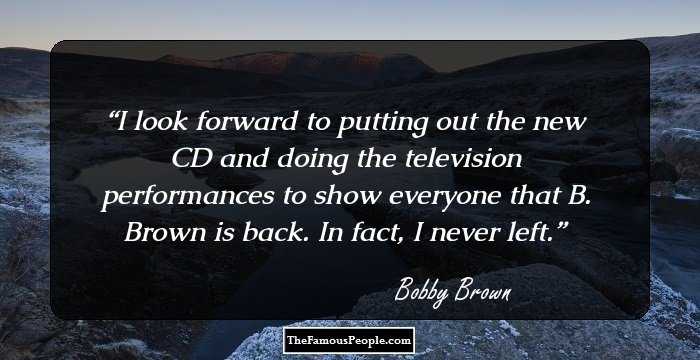 Personal Life & Legacy
At 17, he became father for the first time. From 1989 to 1991, his relationship with Kim Ward produced two children – La Princia and Robert Barisford Brown, Jr.
He was married to singer, Whitney Houston, from 1992 to 2006. The couple has a daughter - Bobbi Kristina Brown. The marriage could not withstand his philandering and drugs abuse and they divorced.

Bobby Brown began dating Alicia Etheridge after his separation from Houston. He married Alicia in 2012. Together, they have children named Bodhi, Hendrix and Cassius.

He has been pulled up by the police on various occasions for drunken driving. In 2013, he was ordered to attend three Alcoholics Anonymous meetings weekly and to complete an 18-month alcohol program.
Trivia
This R&B singer, a distant cousin of five-time Grammy Award winner Donna Summer, is referred to in LL Cool J’s song ‘Around the Way Girl’.

Quotes By Bobby Brown | Quote Of The Day | Top 100 Quotes

See the events in life of Bobby Brown in Chronological Order