James Joseph Brown was a very prominent American musician who contributed immensely to the development of several musical genres including soul music, funk music and rap music. Over a career spanning six decades this highly influential artist redefined the way music was created in America. Regarded as one of the founding fathers of funk music, he has earned many epithets: ‘The Godfather of Soul’, ‘The Original Disco Man’, and ‘Mr. Dynamite’. Brown’s life story is a typical rags-to-riches tale—born into abject poverty during the Great Depression, he had a difficult childhood and became involved in street violence and crimes as a youth. After a jail term he turned to music and joined Bobby Byrd’s vocal group, The Gospel Starlighters. Blessed with an emotive and powerful voice he easily became one of the group’s leaders. The group was renamed as ‘The Famous Flames’ and performed at nightclubs and became popular with the song ‘Please, Please, Please’. By the 1960s, the unique music which Brown created was becoming known as “funk” music—his song ‘Cold Sweat’ which hit No.1 on the R&B Chart was cited as the first true funk song by music critics. Brown’s touring shows were the most extravagant production in American pop music and he could perform more than 330 shows in a year. American Celebrities
Dancers
Musicians
Black Singers
Black Dancers
Childhood & Early Life
James Brown was born to Joseph James and Susie Brown in a small wooden shack during the Great Depression. He is of African, Chinese and Native American ancestry.
His parents broke up when he was small and he spent his life in extreme poverty, often living with relatives. He went to school till the seventh grade.
He was naturally talented and started singing in talent shows as a child. He also learned to play piano, guitar and harmonica.
He became involved in crimes as a teenager and was convicted of armed robbery at 16 and sent to a juvenile detention center. There he met Bobby Byrd who had a gospel group that performed in prison. The two became good friends. 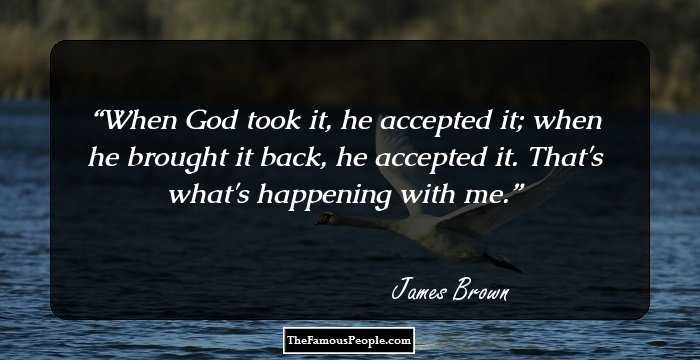 Quotes: Me, God
Continue Reading Below
Career
Brown joined Byrd’s vocal group, The Gospel Starlighters. The group was renamed as The Famous Flames and released their debut album ‘Please, Please, Please’ in 1958. The title track of the album became a big hit and charted at No.1 on the R&B chart. However, the band could never replicate their initial success and broke up.
He released the ballad ‘Try Me’ in 1958 which peaked at No.1 on the R&B chart. He also organized a new backing band that was led by J.C. Davis. He revived his relationship with Bobby Byrd.
During the 1960s he released a number of songs that became huge R&B Hits: ‘Night Train’, ‘Lost Someone’, ‘Baby You’re Right’, and ‘Prisoner of Love’. His popularity with the audience was soaring and he was becoming a big star.
In collaboration with Byrd, he formed the production company, Fair Deal. He was a very hardworking performer and toured relentlessly throughout the 1950s and ‘60s, sometimes performing up to six nights week. His hectic schedule earned him the name, ‘The Hardest Working Man in Show Business’.
As a black singer he attained the status of a cultural icon who stood for black pride. Several of his songs, the most notable one being ‘Say It Loud - I’m Black and I’m Proud’, contained social messages that the black community could connect to.
By the late 1960s the unique sound of his music had begun to be defined as ‘funk’ style. His song ‘Cold Sweat’ was called as the first true funk song by some music critics. This song was the first of his recordings to feature a drum break and a single chord harmony.
His musical style was continually evolving and formed the base for the development of several musical genres. He also had a major influence on the techniques of rapping.
He was a very good dancer and could perform effortlessly all of the dance moves that were popular during his time: "the camel walk," "the mashed potato," "the popcorn". He was well-known for his energetic and intense performances.
His tours were very popular and his touring shows were considered one of the most extravagant in American popular music. There were between 40 and 50 people in the James Brown Revue who traveled with him to cities all over the country to perform. He could perform more than 330 shows in a year.
Continue Reading Below
His popularity began to wane by the late 1970s and he was no longer considered a dominant force in R&B. By the 1980s he was entangled in a series of legal problems ranging from domestic violence to unlawful possession of firearms and drugs. 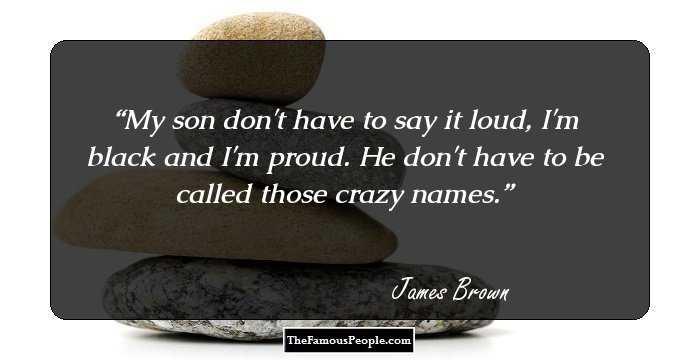 Major Works
Known as ‘The Godfather of Soul’ he was without doubt one of the most influential musicians and dancers of the 20th century. He was one of the founding fathers of funk, soul, and rap music and is considered to have heavily influenced artists like Mick Jagger, Michael Jackson, and Jay-Z.
Awards & Achievements
He received a Lifetime Achievement Award at the 34th annual Grammy Awards in February 1992.
He was given the BET Lifetime Achievement Award in June 2003. 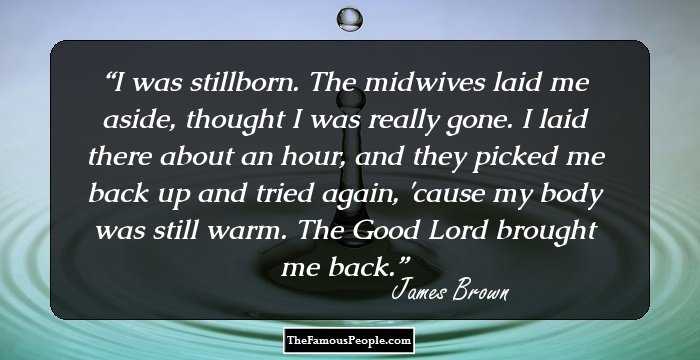 Quotes: Me
Personal Life & Legacy
He was involved with several women throughout his life. He married his first wife Velma Warren in 1953 and divorced in 1969. His second marriage to Diedre Jenkins also ended in divorce.
He married his third wife Adrienne Lois Rodriguez in 1984. This marriage was very troubled and ended with the death of his wife in 1996.
He began a relationship with Tomi Rae Hynie, a singer. They had a wedding ceremony in 2003 but it was not considered valid as Hynie was legally married to someone else during that period.
Brown had several children through different women, including some illegitimate children.
He died of congestive heart failure from complications of pneumonia in December 2006. He was 73 years old.
Trivia
This famous singer was one of the first inductees into the Rock and Roll Hall of Fame at its inaugural induction dinner in 1986.

Quotes By James Brown | Quote Of The Day | Top 100 Quotes

See the events in life of James Brown in Chronological Order