Blac Chyna is a famous American model and music video artist. Her popularity erupted when the hip hop/ rap singer Drake dropped her name in the song ‘Miss Me’ in 2010. Today she has a massive fan following of 12.3 million followers on ‘Instagram’ and 764,000 followers on ‘Twitter’. She began her career as a stripper and later became a model, she has made it to the cover page of several magazines and has appeared in many hip hop music videos. She became an entrepreneur with her brand ‘88fin’ launched her clothing line and has her own makeup brand called ‘Lashed by Blac Chyna’. Her relationships with the American rapper Tyga and the famous Robert Arthur Kardashian Jr. kept her under continuous media coverage until 2016. She is now a mother of two and a successful businesswoman and is presently residing at Los Angeles.
Continue Reading Below American People
American Women
Taurus Models
Female Models
American Models
Career
Before becoming a model, Blac Chyna worked as a stripper. It was in 2010 when she first signed a deal with Dimepiece magazine, and posed on its cover page. She was immediately offered another project with ‘Straight Stuntin Magazine’ and then game an offer from ‘Black Men’s Magazine’ giving her considerable fame.
It was due to the lyrics of rapper Drake that she became famous overnight. In his song ‘Miss Me’ he made a reference of Blac Chyna. The same year, she began growing her followers on social media into millions and ended up playing the stunt double of Nicki Minaj in the music video ‘Monster’ alongside Jay-Z and Rick Ross.
With her rising success, she was named the ‘Model of the Year’ at the ‘Urban Model Awards’ in 2011, and was cast as the lead model/artist for the single ‘Rack City’ by Tyga, eventually leading to a romantic involvement with him.
In 2012, she again posed for ‘Black Men’s magazine’ and was titled ‘Eye Candy of the Month’ by ‘XXL Magazine’. Blac Chyna has also posed for ‘Urban Ink’ and ‘Smooth Girl’ magazines. She once again became the talk of the town in Nicki Minaj’s single ‘Come On A Cone’ with an appearance in the music video.
She starred in the film DGK and was named in the album ‘2 Chainz’ by Nicki Minaj. Yet after all her accomplishments Blac desired to achieve more success and in 2013 she launched her own brand called ‘88fin’ and also graduated from ‘JLS Professional Make Up Artist School’. Simultaneously she launched her own line of lashes called ‘LASHED by Blac Chyna’ and also purchased a beauty bar in Los Angeles which trains makeup artists and also offers beauty services.
You May Like

Female Socialites
American Socialites
American Women Models
American Female Socialites
Continue Reading Below
What Makes Blac Chyna So Special
Black Chyna is certainly one of a kind. She is bold, inspirational and strong. On becoming a model, her ambitions continued expanding and she turned her popularity into a huge business. She works very hard and even though she might be a single mother, she manages work and home with ease.
She has been able to inspire many young women to set realistic goals. She is a trendsetter and always has the paparazzi stalking her fashion sense and whereabouts.
Blac Chyna has successfully climbed to the top of the ladder on her own strength and is an independent woman.
Recommended Lists:

Taurus Women
Personal Life & Family
Blac Chyna was born Angela Renee White on 11th May, 1988 in Washington DC to Shalana-Jones Hunter (Tokyo Toni) and Eric Holland. She attended Henry E. Lackey High School and later studied at Johnson and Wales University in Miami.
She initially became a stripper but quickly made it into the modeling world. She began dating Tyga in 2011 while shooting for his music video ‘Rack City’ and in 2012 she gave birth to their son, King Cairo Stevenson. On the same day, Tyga purchased a home for his new family for 6.5 million dollars in Calabasas, but their relationship ended in 2014.
Tyga went on to date Kim Kardashian’s sister, Kylie Jenner. Blac met Robert Kardashian in January 2016 and both became a couple soon after. Three months later Rob Kardashian announced his engagement to Blac on ‘Instagram’ and by May he announced that they were having a baby. On 10th November 2016 she delivered their daughter named, Dream Renee Kardashian. However, after a month she broke up with Rob. She is currently single and resides at Los Angeles.
From her quirky dressing sense to her sneak-peak attires Blac Chyna always has something up her sleeve. She loves setting new fashion statements and can carry them off perfectly. After delivering her daughter in December 2016 she is on a strict diet and has lost quite a few pounds. As of April 2017, she has a net worth of 1.5 million dollars. 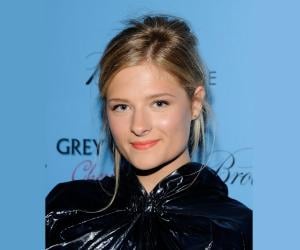