Slim Jimmy is an American musical artist, rapper, hip hop star and a member of the hip hop duo ‘Rae Sremmurd’. Along with his brother, Swae Lee, Slim Jimmy has released two albums and numerous singles that have topped the US Billboard music charts. He began his music career at a very young age with a trio group called ‘Dem Outta St8Boyz’. The band of three used to compose music at home and later play their songs at parties. However, the third member of their group left the band and thus he and his brother formed their own duo and began recording their own songs. His single ‘Black Beatles’ rocked all music charts around the globe. He grew up in the infamous ‘Ida Street Housing Projects’ where music didn’t have much scope, yet he managed to turn the tables and made a career for himself and his brother in the hip hop industry. So far he has released two albums, and both have harnessed great success. Slim Jimmy has been nominated at several esteemed music awards for his singles and albums. In the short span of his career, he has been on two tours, promoting his albums. 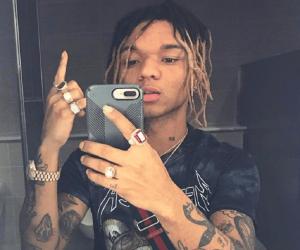 American People
American Men
California Musicians
Male Rappers
Male Singers
Childhood & Early life
Slim Jimmy was born Aaquil Brown in California on 29th December, 1993. At a young age he moved to Ida Street to reside at its housing projects in Tupelo along with his family.
He grew up along with his younger brother, Khalif Brown later known by the stage name of ‘Swae Lee’. His neighbourhood was immersed in crime, and he was exposed to murder, rape and drugs from a young age.
His childhood was difficult as his parents split barely a couple of years after moving to Tupelo. After their parents’ divorce, he and his siblings had to move from one home to another in search of shelter.
Around the same time, they formed a trio band ‘Dem Outta St8Boyz’ along with another band member ‘Lil Pantz’. At that time Slim Jimmy wasn’t his stage name, rather he used to call himself ‘Caliboy’.
Together the band used to create songs in the basement of Slim Jimmy’s home, including cover songs and would play their tracks at local events. He used to buy new musical instruments with his savings from his part time job.
Continue Reading Below
You May Like

The Sexiest Men Of 2020, Ranked
Career
He came to limelight for the first time when he participated in the ‘BET’ R&B and hip hop show ‘106 and Park’. He performed under the ‘Dem Outta St8 Boyz’ band alongside another member named Andre Harrys.
He along his brother came second in the competition and hoped to sign recording deals soon after. They did meet mega recording labels such as Def Jam Recordings and Sony Music but the duo didn’t sign any deals.
After the show, the third member of the band ‘Lil Pantz’ left the band. Hence Slim Jimmy and his brother formed their own hip-hop/ rap duo.
In 2014, Slim Jimmy signed his first record deal with the label ‘Ear Drummers Entertainment’. Thus, he changed the duo’s name to ‘Rae Sremmurd’, which is ‘Ear Drummers’ spelt backwards.
Under the label he began working on his first album alongside his brother. He soon came up with the name ‘Sremm Life’ for their debut album which was released on 6th January 2015.
He released his first single on 18th May, 2014 titled ‘No Flex Zone’. The song was a big hit and was aired on all radio stations. In fact, his first album ranked number 5 on the US Billboard 200.
His debut single was remixed by Pusha T and Nicki Minaj which only added to the success of the already trending single. ‘No Flex Zone’ placed 36 on the ‘US Billboard Hot 100’ music singles chart.
The same year, he released his second single called ‘No Type’ from the album. The single hit radio stations on 15th September and climbed to rank 16 on ‘US Billboard Hot 100’.
Since both his singles topped several charts all over the globe it was rated platinum by RIAA or ‘Recording Industry Association of America’. In December he released his third single, ‘Throw Sum Mo’ with the vocals of Young Thug and Nicki Minaj in a guest appearance.
Continue Reading Below
His fourth single ‘This Could Be Us’ released on 21st April in 2015. It was first played on the ‘Urban Adult Contemporary’ radio station, followed by his fifth single ‘Come Get Her’ later that year in September.
In 2015, he and his brother toured America in order to promote the album ‘SremmLife’. Soon after the success of their first album they began recording their second album.
In 2016, Slim Jimmy announced that his next album would be titled ‘SremmLife2’. The album hit music stores in August, 2016. The third single of the album ‘Black Beatles’ went on to establish him in the industry.
His second tour alongside his brother happened around the end of 2016 to early 2017. The tour was organised for the promotion of his second album.
Major Works
His second album’s third single ‘Black Beatles’ ranked number one on the ‘US Billboard Hot 100’. The song also features vocals from Gucci Mane and is produced by Michael Len Williams II. It placed amongst the top 10 songs even in Australia, UK and New Zealand.
Awards & Achievements
In a short span, he has been nominated at several award shows. In 2015, he was nominated in the category of ‘Artist to Watch’ at the ‘MTVU Woodie Awards’ and at the ‘Billboard Music Awards’ for ‘Top Rap Artist’. That year he won the ‘BET Awards’ along with his brother in the category of ‘Best Group’.
In 2016, he was once again nominated at the ‘BET Awards’ for ‘Best Group’ and also made it to the nominations at the ‘International Dance Music Awards’ in the category of ‘Best Rap/hip-hop Track’ for his song ‘Throw Sum Mo’.
He was also nominated for ‘Favourite New Artist’ at the 2017 ‘Nickelodeon Kids’ Choice Awards’.
Personal Life & Legacy
He presently resides at Atlanta, Georgia and lives a rather lavish lifestyle with his brother Swae Lee, which includes clubbing and staging performances most of the time.
Slim jimmy had once stated in an interview that he grew up in a neighbourhood where crime happened at his doorstep and in order to build a more positive environment and keep evil at bay, he spent most of his time composing music.
He has not yet been in a serious relationship, but has had a number of casual flings with his fans and co-musicians.
Trivia
Slim Jimmy had a major accident when he slipped off the stage at the ‘Governors Ball Music Festival’ and injured his leg. Fortunately, he didn’t take long to recover from the injury.
You May Like

See the events in life of Slim Jimmy in Chronological Order