Benjamin Lincoln is perhaps lesser known but nevertheless an important figure of the American Revolutionary War, during which he was the major general of the Continental Army. Leaving behind a life of comfort and wealth, he dedicated his entire life to the service of his country. Inspired by his father’s public life, he followed the latter’s footsteps and began his career as a town constable at the young age of 21. He later went on to become an adjutant in the 3rd Regiment of the Suffolk County militia, eventually promoted as lieutenant colonel and finally major general of the Continental Army. Lincoln participated in the Boston Campaign, Battle of White Plains, Battle of Bound Brook, Siege of Savannah and Siege of Charleston. His career witnessed three major surrenders during the American Revolutionary War. Even after he retired from the military, he took an active part in politics in his native Massachusetts. He served as the 2nd Lieutenant Governor of Massachusetts and the 1st United States Secretary at War. He was also a member of the Massachusetts state convention.To know more interesting facts about his childhood, personal life and achievements in the military, scroll down and continue to read this biography. Jim Mattis
Revolutionaries #90
Military Leaders #556
Leaders #2711
DID WE MISS SOMEONE?
CLICK HERE AND TELL US
WE'LL MAKE SURE
THEY'RE HERE A.S.A.P
Quick Facts

American People
Military Leaders
American Men
Male Leaders
Aquarius Leaders
Childhood & Early Life
Benjamin Lincoln was born in Hingham, Province of Massachusetts Bay, to Colonel Benjamin Lincoln and Elizabeth Thaxter Lincoln.
His father was a very affluent man and held many civic posts. Benjamin worked in his family farm for a brief period and attended the local school in the town.
Following his father’s footsteps in public life, at the age of 21, he became a town constable. Later in 1755, he joined as an adjutant in the 3rd Regiment of the Suffolk County militia. 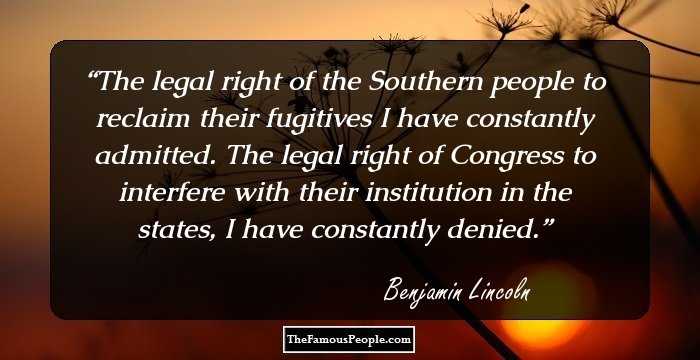 Who Is The Greatest Female Warrior In History?
Career
In 1757, he was elected as a town clerk in Hingham, a position that he held for the next twenty years of his life. He actively participated in militia during the French and Indian War.
In 1763, he was promoted to the rank of a major. Over the next two years, he was elected as the town selectman of Hingham, a position that he continued to hold for a period of six years.
In 1770, he put forward the measures towards non-importation of British goods and also voiced his opinion against the Boston massacre.
In 1772, he was promoted as the lieutenant colonel of the 3rd Regiment of the Suffolk militia. That year, he was elected as a representative of the town to the provincial assembly.
In 1774, the provincial assembly reformed to become the Massachusetts Provincial Congress. He continued to be elected to this body and took the role of managing militia organization and supply.
In 1776, he was promoted to the rank of the major general of the Massachusetts militia, which assigned him the duty of managing coastal defences. The same year, he successfully commanded the last of the Royal Navy ships from Boston Harbor.
In September 1776, he was commissioned to command a brigade of militia that was sent on mission to join forces with General George Washington in New York. His brigade reached southwestern Connecticut, after which he was given new orders to bring them to join Washington's army which was heading towards the north.
On February 14, 1777, he was appointed as the major general in the Continental Army, after General Washington was impressed with him. He led his brigade to Bound Brook, New Jersey, facing a surprise attack.
He was defeated in the Battle of Bound Brook, where he was countered by a much larger force. This risky mission could have also lead to his capture, an incident that he narrowly escaped.
Continue Reading Below
In September 1777, during the Battles of Saratoga, he commanded his forces, injuring himself in the process. His participation resulted in John Burgoyne's surrender of a British army.
In 1780, he was forced to surrender more than 5,000 men to Lieutenant General Sir Henry Clinton during the Battle of Charleston. It was one of the worst defeats of the Continental Army and Benjamin Lincoln was taken as a prisoner of war.
In November 1780, he was exchanged for the British Major General William Phillips. He rejoined the Washington’s main army and and played a crucial role in the Siege of Yorktown and the surrender of Lord Cornwallis on October 19, 1781.
In 1781, he was appointed as the first Secretary of War in George Washington's administration. He was appointed by the Confederation Congress under the Articles of Confederation.
In 1787, as a member of the Massachusetts state convention, he ratified the United States Constitution. The same year, he ended the Shays' Rebellion, a farmers uprising.
He served as Lieutenant Governor of Massachusetts and as the Collector of the Port of Boston, before he retired from public life in 1809. 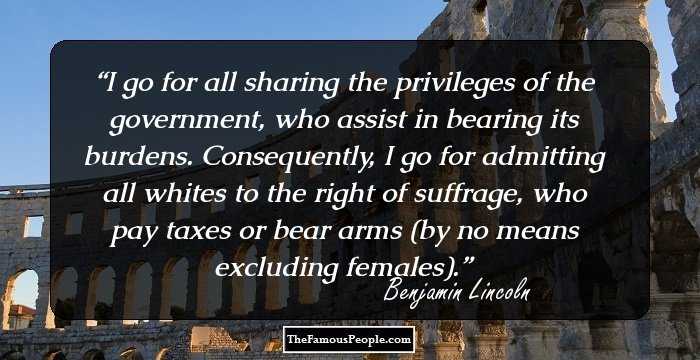 Quotes: I
Personal Life & Legacy
In 1756, at the age of 23 he married Mary Cushing. She was the daughter of the Elijah Cushing of Pembroke, Massachusetts. The couple had eleven children, out of which seven survived till adulthood.
He served as the trustee of the Derby Academy
He died at the age of 77 in Hingham, Massachusetts, U.S. He was laid to rest at the Old Ship Church in Hingham.
In 1972, his home, the ‘General Benjamin Lincoln House' was declared a National Historic Landmark and was enlisted in the National Register of Historic Places.
Trivia
He served as the officer in the American Revolution who rendered distinguished service in the northern campaigns early in the war, but was forced to surrender at Charleston in 1780. 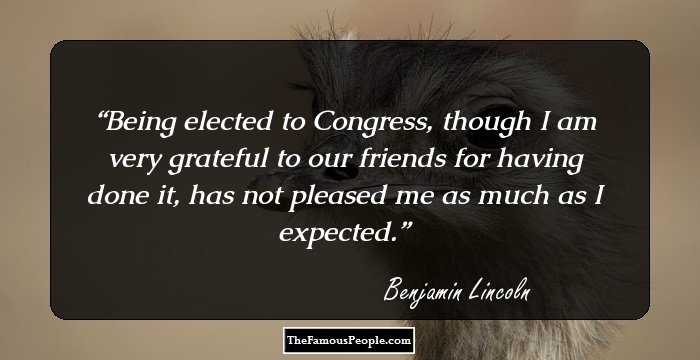 Quotes By Benjamin Lincoln | Quote Of The Day | Top 100 Quotes

See the events in life of Benjamin Lincoln in Chronological Order