Bailey McKnight is a famous YouTube star who posts videos regarding fashion, beauty, and crafts. She and her twin sister Brooklyn use their mother’s channel named CuteGirlsHairstyles and also their own channel Brooklyn and Bailey to post these videos. Her mother Mindy used her channel CuteGirlsHairstyles to post videos of Bailey and Brooklyn with creative hairstyles when they were only 18 months old. This channel has been the most popular channel on hair styles for some time now. Bailey has also appeared on a show titled The Today Show in which Matt Lauer was the host. The twin sisters Bailey and Brooklyn are sometimes referred to as the dynamic duo as they appear together in their video posts. 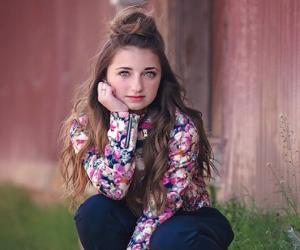 Bailey McKnight appeared in the YouTube channel CuteGirlsHairstyles when she was only 18 months old. The channel belongs to her mother who styled her and her twin sister’s hair and posted the videos that she created with these hair styles on her channel. Later on, Bailey and Brooklyn created a channel called Brooklyn and Bailey in March 2013 to post their own videos on the latest fashions, beauty care, crafts, and many other topics. The channel created by the twin sisters soon became very popular as it dealt with various things that interested teenaged girls, such as tips on dating, how to do babysitting jobs, applying makeup for the first time, whether and how to get braces, how to go shopping on a shoe-string budget and items that could be fun when shared with the family. The sisters have more than 6.9 million followers on Instagram, more than 6.92 million followers on the Brooklyn and Bailey YouTube channel, and over 5.64 million followers on the CuteGirlsHairstyles channel. Both Bailey and Brooklyn appeared in a movie titled The Adventures of Foodboy in 2008 which also starred Lucas Grabeel. They also sang the cover of the song A Life That’s Good, originally sung by Peter Hollens.

The Sexiest Men Of 2020, Ranked
Continue Reading Below
What Makes Bailey McKnight So Special

Bailey McKnight and her twin sister became very popular with teenagers, especially with girls, when they started posting various things that teen-aged girls wanted to know about more. Their eyes have been highly appreciated by their fans. One of the things their fans want to know about them the most is how they take care of their eyes, which type of mascara to use, etc. Making thousands of dollars per month from the two YouTube channels has made the twins an inspiration to all youngsters who want to make it big in their lives.

Bailey McKnight has remained free from all kinds of controversies up until now. She is presently focused on improving her career as a social media star. She wants to continue creating and uploading videos on her channel. Bailey is aware of the fact that she might require to upload her videos without her twin sister in the future as the sisters are getting increasingly busy with their own lives. Bailey wants to enter into a marketing career while her twin sister wants to be a psychiatrist. The twin sisters are also planning to launch a makeup line of their own in partnership with some famous brand.

Bailey McKnight was born in Michigan on December 31, 1999, and grew up with her three sisters named Kamri, Rylan, and Brooklyn. Bailey and Brooklyn are twins and are the oldest children in the McKnight family. When they were only 18 months old, their mother Mindy started posting videos on YouTube that featured various types of hairstyles which she gave to her daughters. Bailey’s parents were serious about their children’s education. Bailey McKnight went through school to enter college. She wants to study further and then take up a career in marketing. Bailey’s family members strictly follow the teachings of the Mormon religion. Her family has adopted two black children: a boy named Daxton and a girl named Paisley which sends out a strong message to the world of their openness and eagerness to help others. In her list of priorities, education comes first, then family and finally YouTube. Bailey McKnight is as beautiful as her twin sister, differing only when she smiles. She squints when she smiles while Brooklyn’s eyes remain wide while smiling.

Bailey and Brooklyn both love to read books, love to eat a lot of potatoes, and have two dogs named Braidy and Ash.

They are big fans of Taylor Swift and attend her concerts whenever they can.