(Best Known for Album 'Let Go', The Best Selling Album of the 21st Century by a Canadian Artist)

Avril Lavigne is a Canadian singer, songwriter, and actor. She started hogging the limelight at a very young age, and was signed by ‘Arista Records’ when she was 16. Her grungy pop-rock sounds appealed to the teens around the world. Her unique looks made her extremely popular among the American teens. Best known for mixing rock, punk, and a rebellious style of music, Lavigne has earned many fans over the years. She appeared on stage along with Shania Twain as part of an award ceremony and caught the attention of many. She also caught the attention of Peter Zizzo, an American songwriter/producer, with her home video that showcased her singing skills. Upon his invitation, she joined him on a song-writing trip to New York. Lavigne’s music career took off with the release of her debut album ‘Let Go,’ and she successfully established herself in the world of music, thanks to her sparkling performance. She earned popularity and was consequently signed by ‘Arista Records.’ This proved to be a huge boost to her music career. She enchanted the music-loving audience with her second album ‘Under My Skin’ which topped the ‘US Billboard.’ With her third album ‘The Best Damn Thing,’ she proved her mettle and established herself as a popular singer-songwriter. Shawn Mendes
DID WE MISS SOMEONE?
CLICK HERE AND TELL US
WE'LL MAKE SURE
THEY'RE HERE A.S.A.P
Quick Facts

Canadian People
Lyricists & Songwriters
Pop Rock Singers
Canadian Women
Libra Singers
Childhood & Early Life
Avril Ramona Lavigne was born on September 27, 1984, in Belleville, Ontario, Canada. She grew up in the small town of Napanee, Ontario.
Her French-Canadian parents Jean-Claude and Judy were devout Baptists. She was exposed to music by the age of two through her mother's church songs.
Until the age of 12, she was just a singer. Soon, she started teaching herself to play the guitar and also started writing songs.
In 1999, Lavigne tasted success for the very first time. She won a singing contest and took the stage alongside Shania Twain in Canada's capital, Ottawa.
In 1999, she was spotted by Cliff Fabri, who eventually became her first professional manager, while she was performing at a bookstore in Kingston, Ontario. 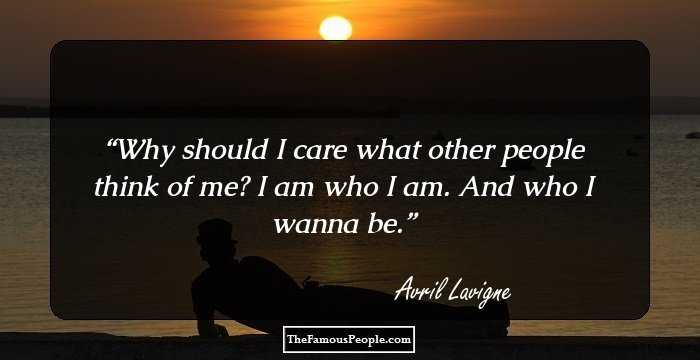 Quotes: Me, Think, I
Continue Reading Below
Career
In June 2002, ‘Let Go,’ her first album, was released. It peaked at number two on ‘US Billboard 200,’ and also featured on music charts in the UK, Canada, and Australia. She then set out on her first world tour called ‘Try to Shut Me Up Tour.’
In 2004, she came up with her second album ‘Under My Skin.’ She wrote most of the songs along with Canadian singer-songwriter Chantal Kreviazuk.
In 2004, she set out on her second world tour titled ‘Bonez Tour,’ during which she performed in almost all the continents for a year.
In 2006, she performed her popular song ‘Who Knows’ at the closing ceremony of ‘Torino Olympics.’
In 2007, she released her third album ‘The Best Damn Thing.’ The single ‘Girlfriend’ from the album became popular and rocked the music charts, peaking at number one on the ‘US Billboard.’
Hard working and smart, Lavigne was well aware of the fact that world tours would increase her popularity. In 2008, she went on her third world tour ‘The Best Damn Tour’ to promote her album ‘The Best Damn Thing.’
In March 2011, her fourth album ‘Goodbye Lullaby’ was released by ‘RCA Records.’ Most of the songs from this album were written by Lavigne during her teenage years. She went on her fourth world tour ‘Black Star Tour,’ performing in Asia, America, and Europe to promote her album.
Over the course of her four albums, Lavigne scored a string of hit singles, such as ‘Complicated,’ ‘Sk8er Boi,’ ‘I’m With You,’ ‘Losing Grip,’ ‘Don’t Tell Me,’ ‘My Happy Ending,’ ‘Nobody’s Home,’ ‘Keep Holding On,’ ‘Girlfriend,’ ‘When You’re Gone,’ ‘Hot,’ and ‘The Best Damn Thing.’
‘Girlfriend’ had its share of controversy as her co-writer and record label were sued by songwriters James Gangwer and Tommy Dunbar. They claimed that ‘Girlfriend’ was a rip-off of their song ‘I Wanna Be Your Boyfriend,’ released in 1979. The case was eventually settled out of court.
Continue Reading Below

The single ‘Here’s to never growing up,’ from her much-talked-about self-titled album was released in 2013. The album ‘Avril Lavigne’ was released in November 2013, by ‘Epic Records’ and opened at number five at ‘US Billboard 200.’ The single ‘Hello Kitty’ from the album sparked controversies concerning racism.

Her sixth album ‘Head Above Water’ was released in February 2019, by ‘BMG’ label. While it peaked at the top 10 positions in countries like Australia, Canada, Germany, and Italy, it opened at number 13 on ‘US Billboard 200,’ making it a moderate success in comparison with her previous albums. 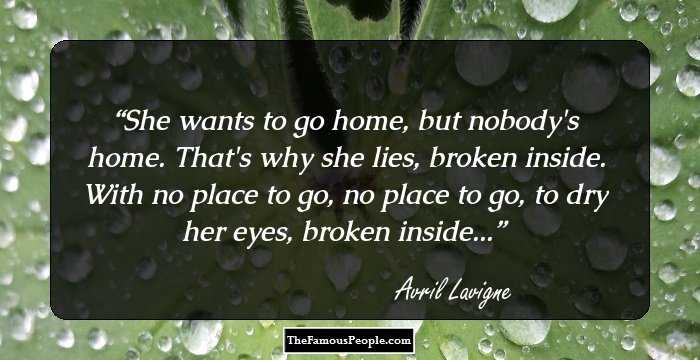 Quotes: Home
Major Works
Her debut single ‘Complicated’ catapulted her to fame, and she received appreciation from the critics as well. It peaked at number one in Australia and was the best-selling Canadian single in 2002.

‘Girlfriend,’ a popular single from her album ‘The Best Damn Thing,’ was claimed to be the most-downloaded track worldwide in 2007, by ‘The International Federation of the Phonographic Industry.’ It went on to sell more than seven million copies.

In 2003, Avril Lavigne received ‘Grammy Award’ nominations for the album ‘Let Go’ and for the single ‘Complicated.’

For ‘Let Go’ and ‘Complicated,’ she won the ‘Juno Award’ in 2003, under the categories, ‘Album of the Year’ and ‘Single of the Year’ respectively.

In 2005, she once again won the ‘Juno Award’ under the ‘Pop Album of the Year’ category for her album ‘Under My Skin.’
With her earnings soaring to $12 million in December 2007, ‘Forbes’ ranked her eighth in the list of ‘Top 20 Earners under 25.’
Continue Reading Below 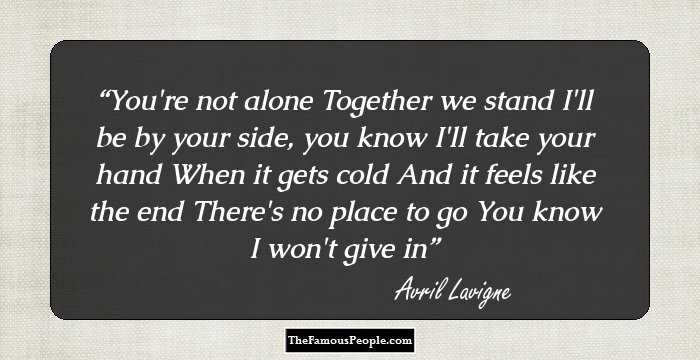 In July 2013, she married fellow Canadian musician Chad Kroeger, the frontman of the band ‘Nickelback.’ They got separated in 2015.

In April 2015, Avril Lavigne announced that she was diagnosed with Lyme disease. She also expressed her desire to spread awareness of the disease.
As an entrepreneur, she created a successful fashion and lifestyle brand called ‘Abbey Dawn.’ She also came up with three fragrances, namely ‘Black Star,’ ‘Forbidden Rose,’ and ‘Wild Rose.’
In 2006, she voiced an animated character named ‘Virginia Opossum’ for the film ‘Over the Hedge.’
‘The Avril Lavigne Foundation’ supports ill and disabled children and youth.
Trivia
This famous Canadian singer’s lifestyle brand ‘Abbey Dawn’ was named after her childhood nickname.
This prominent singer’s album ‘The Best Damn Thing’ included the epic ballad ‘Keep Holding On,’ which she wrote at the request of ‘20th Century Fox’ for the studio’s fantasy-adventure film ‘Eragon.’

Quotes By Avril Lavigne | Quote Of The Day | Top 100 Quotes

See the events in life of Avril Lavigne in Chronological Order