(Member of the Pop Rock Band 'The Jonas Brothers')

Advanced Search
Paul Kevin Jonas II, better known as Kevin Jonas, is an American musician who found fame appearing alongside two of his brothers, Joe and Nick Jonas, in the highly successful and constantly morphing pop rock band ‘Jonas Brothers.’ The band has Kevin as a lead guitarist, also contributing to the backing vocals and the mandolin. The Jonas brothers soon plan to launch a biography named ‘Blood.’ Kevin and his brothers released their debut studio album, ‘It's About Time,’ in 2006, which failed to achieve any significant success. Their second studio album, the self-titled ‘Jonas Brothers,’ released in 2007 and became a big hit, allowing Kevin and the band to expand into the world of film and TV. In 2012, with the band temporarily on hold, Kevin Jonas appeared on his own reality series, ‘Married to Jonas,’ with his new wife, Danielle. He also appeared in ‘Celebrity Apprentice’ in 2014. He set up a property development company called ‘JonasWerner’ and is a co-CEO of ‘The Blu Market,’ which handles communications for social-media influencers. Denise Miller-J...
DID WE MISS SOMEONE?
CLICK HERE AND TELL US
WE'LL MAKE SURE
THEY'RE HERE A.S.A.P
Quick Facts

American People
Lyricists & Songwriters
Pop Rock Singers
American Men
New Jersey Musicians
Childhood & Early Life
Kevin Jonas was born on November 5, 1987, in Teaneck, New Jersey, and grew up in the nearby township of Wyckoff. His mother, Denise Marie Miller, was a singer and taught sign language. His father, Paul Kevin Jonas Sr, a former preacher and an ordained minister, is also a musician and songwriter. Kevin has three younger brothers, Joe (born in 1989), Nick (born in 1992), and Frankie (born in 2000). 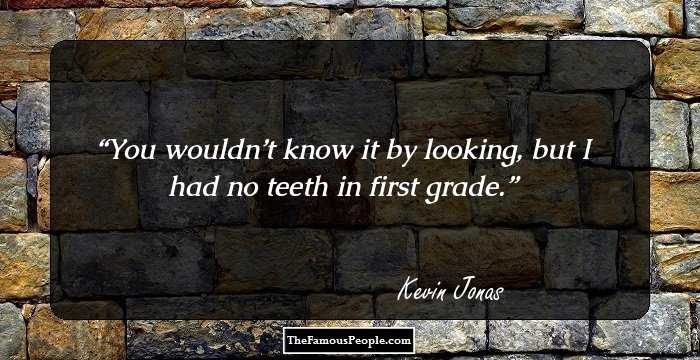 Continue Reading Below
Career
In early 2005, Steve Greenberg, president of ‘Columbia Records,’ listened to a recording made by Kevin Jonas’s younger brother Nick. Greenberg liked Nick's voice, and after hearing a track sung by all the brothers, he decided to sign the three as a group act. The brothers finally settled on the band name ‘Jonas Brothers.’
The band’s first album, ‘It's About Time,’ had a limited release on August 8, 2006. However, as ‘Sony’ were apparently uninterested in promoting the brothers, Kevin and his brothers decided to change labels. The ‘Jonas Brothers’ were dropped by ‘Columbia’ in early 2007.
The brothers signed with ‘Hollywood Records’ in February 2007. Around the same time, the band began appearing in commercials, singing the ‘Baby Bottle Pops’ jingle. This media exposure allowed the band’s second album, ‘Jonas Brothers,’ released on August 7, 2007, to reach the fifth spot on the ‘Billboard’ chart. The band’s third album, ‘A Little Bit Longer,’ was released a year later and shot to the first spot on the charts.
“June 2009 saw the release of the brothers' fourth studio album, ‘Lines, Vines, and Trying Times.’ With nearly a quarter of a million copies sold, this album also hit number one on the ‘Billboard 200.’
On May 1, 2012, it was announced that the ‘Jonas Brothers’ had split from their record label ‘Hollywood Records’ and bought the rights to their music. The band was put on hold. On February 28, 2019, after more than 5 years, the brothers announced their reunion.
During their musical career, Kevin and his brothers constantly sought exposure across all media channels. In 2007, the band guest-starred in an episode of ‘Hannah Montana,’ called "Me and Mr. Jonas and Mr. Jonas and Mr. Jonas," which aired on ‘Disney Channel.’ The episode attracted a record 10.7 million viewers and became the most-watched series episode on the basic cable package.
Kevin and his brothers also starred in ‘Camp Rock,’ a ‘Disney Channel’ TV movie, which featured Kevin as Jason, lead guitarist of a band called ‘Connect 3.’ The movie’s soundtrack was released in June 2008, and Kevin and his brothers returned in its sequel, ‘Camp Rock 2: The Final Jam,’ which premiered September 2010.
Also aired on ‘Disney Channel,’ ‘Jonas Brothers: Living the Dream’ was a short reality series documenting the brother's ‘Look Me in the Eyes Tour.’ It premiered on May 16, 2008. The second season, which centered on the European section of the band’s ‘2009 World Tour, ‘premiered in March 2010.
Kevin, Joe, Nick, and their youngest brother, Frankie, also starred in the ‘Disney Channel Original Series’ titled ‘Jonas,’ from 2009 and 2010, which focused on the brothers relaxing at their summer house in Los Angeles.
Kevin Jonas also appeared with his wife, Danielle, in his own ‘E!’ reality series. The series, which premiered in August 2012, was a fly-on-the-wall documentary about the young couple's life at home and also documented the band’s efforts to put together a fifth studio album.
Kevin also participated in the seventh season of ‘Celebrity Apprentice’ in 2014. He was eliminated in the second episode. He also made a cameo appearance in a 2014 episode of ‘Real Housewives of New Jersey,’ working in his new real-life role as a building contractor and leading the construction of the home of a “housewife.”
After the ‘Jonas Brothers’ went on a hiatus in 2013, Kevin Jonas co-founded a construction company named ‘JonasWerner.’ He also became a co-CEO of ‘The Blu Market,’ which handles communications for social-media influencers.
On February 28, 2019, Kevin and his brothers announced a ‘Jonas Brothers’ comeback via social media. They released a surprise new single, ‘Sucker,’ while taking part in a week-long special guest appearance on ‘The Late Late Show with James Corden.’ The song charted at number one on the ‘Billboard Hot 100.’
He was the voice of ‘Cherub’ in the video game ‘Night at the Museum: Battle of the Smithsonian.’ 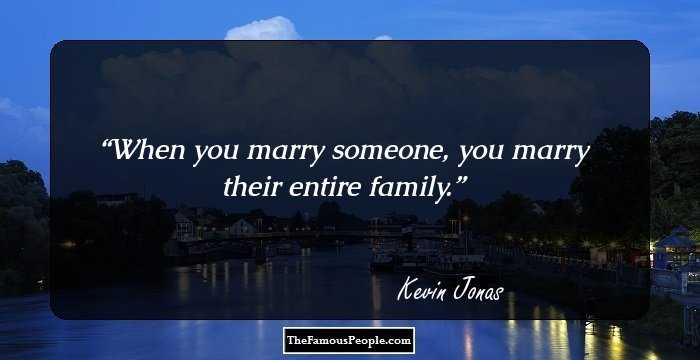 Family & Personal Life
Kevin is the eldest of four brothers. He got married to Danielle Deleasa on December 19, 2000. The couple’s first daughter, Alena Rose Jonas, was born on February 2, 2014, and their second daughter, Valentina Angelina Jonas, arrived on October 27, 2016. The family lives in Los Angeles, California.

Quotes By Kevin Jonas | Quote Of The Day | Top 100 Quotes

See the events in life of Kevin Jonas in Chronological Order