(Best Known for His Album "Back to Bedlam," One of the Best-Selling Albums in UK Chart History)

Advanced Search
James Blunt, an English singer-songwriter and musician, started his career as a commissioned officer in the British Army. He rose to the rank of army captain and saw action in the strife-torn Kosovo region. After six years of service, he decided to resign from the army to focus on his musical career. He changed his name from James Hillier Blount to James Blunt. He signed with EMI, before securing a recording contract with ‘Atlantic Records’ and ‘Custard Records’. His debut studio album, ‘Back to Bedlam’, initially attracted little critical attention and his live performances received somewhat mixed reviews, where his lack of performing experience became apparent. However, soon his debut album garnered popularity with the masses and the single ‘You're Beautiful’ from the album propelled him to stardom. Another single ‘Goodbye My Lover’ from the same album became immensely popular and Blunt started being recognized for his musical talents. The album sold several million copies worldwide and featured on the UK Albums Chart and also earned great success in the US. His second album, ‘All the Lost Souls’, topped the charts in over 20 countries. His other albums, ‘Some Kind of Trouble’ and ‘Moon Landing’, also did exceedingly well on the charts. The singer has won many accolades especially for his debut album and continues to perform in live shows and concerts. Adele
DID WE MISS SOMEONE?
CLICK HERE AND TELL US
WE'LL MAKE SURE
THEY'RE HERE A.S.A.P
Quick Facts

British People
Lyricists & Songwriters
British Men
University Of Bristol
Male Singers
Childhood & Early Life
James Blunt is the eldest child of Jane and Charles Blount, a colonel in the British Army Air Corps and military pilot.
He was a very active teenager and by the age of sixteen, he acquired his pilot's license and learnt to ride motorcycles. He attended Elstree School, Berkshire and the prestigious Harrow School in London.
He was admitted to the University of Bristol on army-sponsored seat where he pursued aerospace engineering and later switched to sociology. He earned his bachelor’s degree in sociology in 1996. 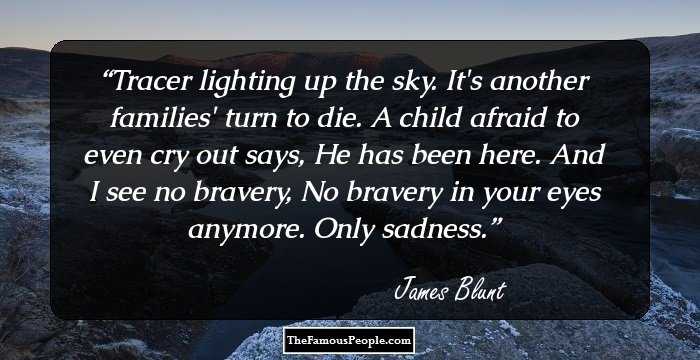 Quotes: I
Continue Reading Below
Career
As his education was sponsored by the Army, James Blunt was legally bound to join the defense forces for minimum of four years. Commissioned in the Life Guards, he soon ascended the ladder and was made the Captain.
In 1999, he became the part of the NATO deployment in Kosovo as an armored reconnaissance officer. An enthusiastic skier, he eventually became the best skier of the entire ‘Royal Armored Corps’.
When he was still serving in the armed forces, he recorded a demo. One of his friends asked him to forward the demo to Todd Interland who was Elton John's manager. The track 'Goodbye My Lover’ impressed Interland.
After six years of service he resigned from the British Army in 2002 to accomplish his musical dreams and adopted an easier-to-spell stage-name Blunt. Though he was signed with EMI music publishers, he was struggling to earn himself a record contract.
In 2003, he grabbed the attention of the American musician, Linda Perry, through his promotional tape when she was touring London. This brought about a much expected turn in Blunt’s career and he soon signed a recording contract with Linda.
The year 2003, proved significant to Blunt’s career and he came out with his debut album ‘Back to Bedlam’. Produced in association with Tom Rothrock, the album was recorded at Rothrock's Los Angeles home studio.
His most successful single release to date, ‘You're Beautiful’, which catapulted him to limelight was part of the ‘Back to Bedlam’ album. It peaked at no. 1 on pop charts in several countries including the Britain, the United States, Spain, Canada and the Netherlands.
In 2007, he released the album, ‘All the Lost Souls’ which helped him develop a fan base included the hit singles ‘1973’, ‘Same Mistake’, ‘Carry You Home’ ,’I Really Want You’, ‘Love, Love, Love’ and ‘It Is My Song".
‘Some Kind of Trouble’, his third studio album, released in 2010, however, failed to reiterate his previous grand success and received mixed reviews from the music critics. It debuted at no. 4 on the UK Albums Chart, and at no. 11 on the Billboard 200. The album included singles such as, ’Stay the Night’ and ‘If Time Is All I Have’. It was praised as “a move toward love songs free of pretension” by ‘Allmusic’.
Continue Reading Below
‘Moon Landing’, his latest album was released in 2013. Its first single ‘Bonfire Heart’ reached no. 4 in the UK Singles Chart within a couple of weeks of its release. It also featured on music charts of several countries all over the world. 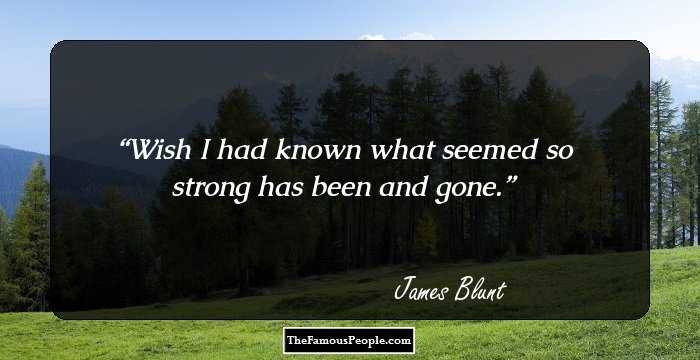 Quotes: I
Major Works
James Blunt’s debut album, ‘Back to Bedlam’, was certified 10� platinum. With its highly popular hit singles such as, ‘You're Beautiful’, ‘Goodbye My Lover’, and ‘High’, the album is the 16th best-selling album in UK chart history.
His 2007 released album, ‘All the Lost Souls’ received Platinum certification in Australia and Germany. It reached no. 1 on the album charts in Argentina, Australia, Canada, Estonia, France, Germany, Greece, Ireland, Italy and Britain.
Awards & Achievements
In 2006, James Blunt was nominated in five categories for the Brit Award. He won two of them in the categories, ‘Best British Male Solo Artist’ and ‘Best Pop Act’.
For his hit single, ‘You’re Beautiful’, he won the ‘MTV Australia Video Music Award’s’ ‘Song of the Year Award’ in 2006.
He won two Ivor Novello Awards in the categories, ‘PRS Most Performed Work’ and ‘International Hit of the Year’ for ‘You're Beautiful’. He shared the awards with songwriters Amanda Ghost and Sacha Skarbek. 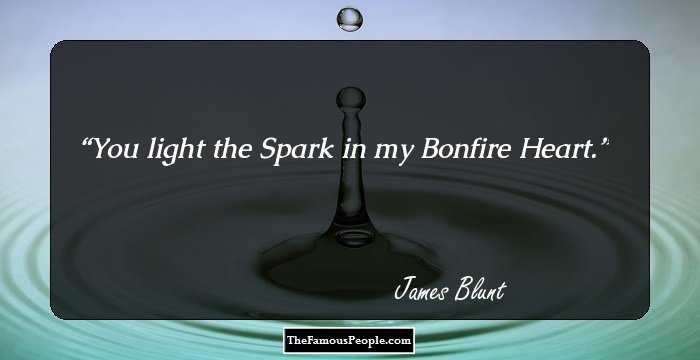 Quotes: You, Heart
Personal Life & Legacy
James Blunt got engaged to Sofia Wellesley in 2013. An Edinburgh University graduated she is employed as a legal consultant in London.
He shares a strong bond with his family and his father manages his finances. He has stated that ‘fame and celebrity is something that other people have constructed that I'm not really party to’.
He was impressed with the work done by the medical charity ‘M�decins Sans Fronti�res’ and has been helping in raising funds for the organization through benefit concerts.
He has been associated with environmental causes, and screened the trailer for ‘An Inconvenient Truth’ at one of his concerts. In 2007, he also performed at the ‘Live Earth’ concert at Wembley Stadium, London.
Trivia
This British pop star holds a Guinness World Record for the ‘Most Albums Sold in a Year’ in the UK with 2,368,000 copies.
This British singer is also known by the nicknames Blunty and Weener. One he got at Harrow School, while the other was given to him while he was serving in the army.

See the events in life of James Blunt in Chronological Order